The founder of Papa John's, John Schnatter, began his pizza career at Rocky's Sub Pub in Jeffersonville, Indiana, while attending Jeffersonville High School. Schnatter graduated from Jeffersonville High in 1980, and continued his association with the pizza business while attending Ball State University, working as a delivery driver for Greek's Pizzeria in Muncie. Upon graduating, he began working for his father, who was co-owner of the bar (Mick's Lounge) in Jeffersonville, Indiana. In 1984, he sold his car (a 1971 Chevrolet Camaro Z28) to buy out the other owner of the bar, and started serving pizza to customers. 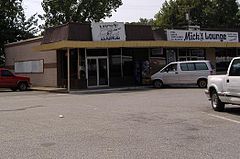 Site of the first Papa John's.

The corporation credits its growth to great customer service, quality products, and menu simplicity, in contrast with other chains' focus on low prices. Fewer options in crust styles and side dishes simplify inventory management, meaning the focus could remain on quality. However, since the mid-1990s, Papa John's has followed the industry trend and greatly expanded its menu options, adding thin-crust, pan pizza, and whole wheat crust options, "robusto", barbecue, and Alfredo sauces; 10 specialty pizzas, many with new toppings and new cheeses; chicken strips and four flavors of chicken wings; many dessert pastries, such as apple pie; and new variations of bread sticks and cheese sticks.

The thin crust has been advertised as crispier than others (similar to St. Louis-style pizza) and the "robusto" sauce introduced with the pan crust has chunky tomato pieces and more vibrant spice notes. To simplify in-store operations and to provide product consistency between stores, many functions such as dough production are carried out by an off-site commissary system similar to that of most other fast food chains.

In late 2009, the company made a partial return to offering a relatively narrow range of menu items. The Papa Perfect Pan Pizza, the whole wheat crust, and the robusto style sauce were discontinued.

We conclude that (1) the slogan, standing alone, is not an objectionable statement of fact upon which consumers would be justified in relying, and thus not actionable under section 43(a); and (2) while the slogan, when utilized in connection with some of the post-May 1997 comparative advertising--specifically, the sauce, dough and stuff campaigns--conveyed objectionable and misleading facts, Pizza Hut has failed to adduce any evidence demonstrating that the facts conveyed by the slogan were material to the purchasing decisions of the consumers to which the slogan was directed.

In 1997, Pizza Hut filed suit against Papa John's based on a series of advertisements that compared the ingredients of Papa John's and its competitors. At trial, the court agreed with Pizza Hut's argument that Papa John's slogan did not constitute statements of literal fact – that "fresher ingredients" do not necessarily account for a "better" pizza; this ruling was overturned in 2000 when Papa John's appealed the decision. Although the jury's decision on the misleading advertising was upheld, the appeals court determined that Pizza Hut failed to prove, under the requirements of the Lanham Act, that the misleading advertising and puffery had a material effect on consumers' purchasing decisions.[4]

Papa John's primarily takes carryout and delivery orders, although some stores have tables and chairs. Papa John's offers online ordering throughout the United States, automatically assigning all registered customers to the closest location.

In Ireland many Supermac's restaurants have Papa John's located inside.

The structure of a Papa John's restaurant is typical of that seen in many fast food outlets, with a salaried store manager presiding over day-to-day operations, and several salaried or hourly assistant managers and shift managers presiding over in-store and delivery team members. Above the store management is an area supervisor who is generally supervised by a franchisee or; in corporate stores, a director of operations reports to an operational vice president.

Franchise stores owners pay a royalty fee 5% of net sales to Papa John's International, and up to 7% of net sales on advertising efforts.[5] Corporate operations looks over franchisees to ensure brand consistency.

As of January 2008[update], there were over 3,330 Papa John's restaurants operating in all 50 U.S. states and 30 international markets. Papa John's International is a publicly traded company, with 30% of shares owned by John Schnatter.

Papa John's became one of the first major pizza chains to include a garlic butter dipping sauce with every original crust or square pan pizza, as well as a peperoncini pepper, a traditional Italian spice.

In January 2002, Papa John's became the first national pizza chain to make online ordering available to all of its U.S. customers.[6] Most other national chains subsequently added online ordering to their services. Online ordering is also available in Canada, South Korea, the United Kingdom, and Ireland.

On March 30, 2006, Six Flags announced that its parks' pizza would exclusively be from Papa John's. In turn, Six Flags received an annual sponsorship and promotional opportunities from Papa John's. Papa John's is also the official pizza supplier of the Olympic Speedskating Oval in Calgary, Alberta, Canada. On November 16, 2006, Papa John's signed with ESPN Regional Television to become the title sponsor of the annual PapaJohns.com Bowl, a college post-season football bowl game in Birmingham, Alabama.

Papa John's is credited with developing the most advanced dynamic resource control infrastructure in the fast food industry. Sources within the company have stated the centralized network is modeled after NORAD's Cheyenne Mountain Operations Center. As of January 2007[update], all Papa John's retail locations were linked via fiber optic cables to national headquarters.[7] Real-time updates are made at the company's Louisville national inventory control center, where operations research experts (many recruited from the 2002 layoffs at Enron) allocate deliverymen and pizza ingredients to areas experiencing surges in pizza demand.[8]

Papa John's received negative media attention in May 2008 when a Washington, D.C. franchise distributed t-shirts making fun of Cleveland Cavaliers star player LeBron James at a playoff game against the Washington Wizards. Photographs of the shirts quickly spread from the blogosphere[9] to Cleveland television. Increasing awareness of the controversy prompted an apology from the Papa John's national headquarters on May 5.[10] To apologize, Papa John's offered large single-topping pizzas for 23 cents (matching James' jersey number) at all locations in Greater Cleveland and throughout northern Ohio. The chain sold over 172,000 pizzas at 23 cents a piece, with customers waiting in lines outside of some stores for as long as three hours.[11] However, the media attention that resulted is widely considered to be worth millions and led to massive increases in sales across all Papa John's locations, most notably in Cleveland.

In 2009, Schnatter began a nation-wide campaign to find the Z28 Camaro he sold in order to start his first Papa John's store. With the help of the automotive website Jalopnik, the car was traced to the town of Flatwoods, Kentucky, where it was owned by one Jeff Robertson. Robertson had kept the car in excellent condition, even adding a larger motor for drag racing (he reported the car doing a 9.55 quarter mile) and exhibiting the vehicle in car shows. He sold the car back to Schnatter in August of that year, cashing a check for $250,000; in addition, Schnatter offered $25,000 to the family who had originally purchased the car from him in 1983 and tipped off Jalopnik to its whereabouts. In honor of the re-acquisition of the car, Papa John's announced that anyone who drove a Camaro to a Papa John's location on August 26 would receive one free pizza.

Also, around August 2010 Papa John's Corporate signed a multiple year deal with the National Football League (NFL) and NBC - Football Night in America to be their official sponsor; therefore, making Sunday Night Football as pizza and football night in America.

Papa John's is currently the sponsor of the NBA D-League Game of the Week presented by Versus.

Papa John's operated under the company name "Papiano's" in East Lansing, Michigan, because a pre-existing local chain of pizza restaurants in this area already laid claim to the name "Papa John's" before the major chain was formed.[12] The location closed in 2008 and reopened as another pizzeria.[13]

Papa John's has operated in the UK since 2001. In May 2011 the company had 156 shops in the UK with plans for between 400 and 500 within 5 years.[14] They are the number 2 pizza chain in the country behind Domino's with slightly more stores than Perfect Pizza.[citation needed]

All the Papa John's restaurants in Portugal are now closed or have changed names. Some of these locations still serve pizza, though the master-franchise Rest-Smart filed for bankruptcy.[15]