Born in Perranporth, Cornwall, Healey became interested in all things mechanical at an early age, most particularly aircraft. After leaving school he joined the Sopwith Aviation Company in Kingston upon Thames, Surrey, as one of its first apprentices and no doubt also worked in the Sopwith sheds at the nearby Brooklands aerodrome and racing circuit. After WW1 started, he volunteered for the Royal Flying Corps (RFC) and earned his "wings" as a pilot in 1916. During the First World War, he served on anti-Zeppelin patrols and also as a flying instructor. Shot down by British anti-aircraft fire on one of the first night bomber missions of the war, he was invalided out of the RFC at the age of 18. He returned to Cornwall and took a correspondence course in automobile engineering and after the war ended, opened the first garage in Perranporth in 1919.

In 1932 Healey won the class for unlimited sports cars at the Brighton Speed Trials, driving an Invicta, in a time of 28.8 sec for the half mile course.[2]

He gained a reputation as a consultant engineer and designer and was appointed General Manager of the Triumph Motor Company in 1931. He went on to create the renowned Southern Cross and Dolomite 8 models.

During the Second World War, Healey was in charge of developing an aircraft carburettor for the Ministry of Supply and also worked with Humber on armoured cars.

In 1945, he formed the Donald Healey Motor Company Ltd, based in an old RAF hangar at Warwick. In 1949, Healey established an agreement with George W. Mason, the president of Nash Motors to build Nash-engined Healey sports cars. The first series of the 2-seaters were built in 1951 and they were designed by Healey. The Nash-Healey's engine was a Nash Ambassador 6-cylinder, the body was aluminum, and the chassis was a Healey Silverstone. However, Pininfarina restyled the bodywork for 1952 and took over the production of its new steel body. The company developed the Austin-Healey and Austin-Healey Sprite motor cars in licensing arrangement with British Motor Corporation in 1952 and 1959.

BMC purchased Jaguar and was renamed BMH in 1966. In 1968 it merged with Leyland Motors and formed British Leyland. In the wake of these organisational changes, in 1970 Healey became chairman of Jensen Motors with the enthusiastic backing of key US based Austin-Healey distributors.[3] This was a long and fruitful relationship for Healey, in part because Jensen had been making body shells for Austin-Healey since the 1952 demise of the similar Austin A40 Sports. Healey's first project with a Jensen was re-engineering the Jensen 541S with a V8 engine in 1961, the resulting car being a personal favourite of Healey's.Ten years later, Healey helped design the Lotus engined Jensen-Healey together with Lagonda designer William Towns, to replace the Austin-Healey, which BMC were discontinuing.

Donald Healey died in Perranporth at the age of 89.

For his "services to export", Healey was made a Commander of the Order of the British Empire (CBE) by Queen Elizabeth II in 1973.[4]

In 1996, he was inducted into the International Motorsports Hall of Fame.[4]

In 1921, Donald Healey married Ivy Maud James and they had three sons.

He bought the 27 acres (11 ha) Trebah Estate, near Falmouth, Cornwall in 1961 and carried out many ambitious projects there, including the building of commercial greenhouses to grow orchids and a project to build air/sea rescue inflatables. He demolished the concrete covering of the beach of Polgwidden Cove (a D-Day invasion launch-pad) and used the salvaged material to surface a steep track from the house to the beach. (Hibbert, 2005). He sold Trebah in 1971.

His son, Geoffrey, born in 1922 and a former pupil of Warwick School, wrote several books about the cars and one about their partnership (see below). 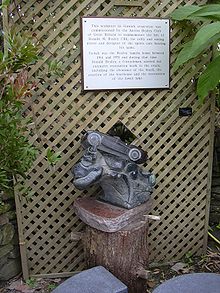 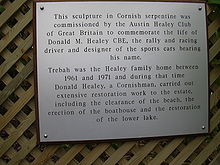 The Austin Healey Club[5] has placed a small monument, in the form of a sports car, and an inscribed plaque, as a memorial to Donald Healey in the garden of Trebah, which is now open to the public, next to the Visitor Centre.