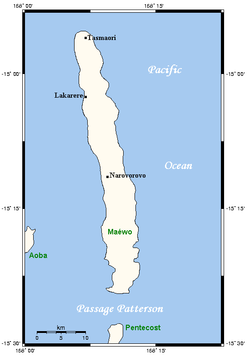 Maewo is the island with the highest rainfall in Vanuatu, greater than 2500 mm per year. The island is covered in green, lush vegetation. The heavy rainfall provides abundant fresh water and waterfalls. There are also hot springs in the centre of Maewo.

The most notable village on the island is Lakarere, on the northwest coast.