Southern Cone (Spanish: Cono Sur, Portuguese: Cone Sul) is a geographic region composed of the southernmost areas of South America, south of the Tropic of Capricorn. Although geographically this includes part of Southern and Southeast (São Paulo) of Brazil, in terms of political geography the Southern cone has traditionally comprised Argentina, Chile, Paraguay, and Uruguay. In the narrowest sense, it only covers Argentina, Chile and Uruguay, bounded on the north by the states of Brazil, Paraguay, Bolivia and Peru, on the west by the Pacific Ocean, and south to the junction between the Pacific and Atlantic Oceans, which it is the closest continental area of Antarctica (1000 km).[2]

The main language spoken in the region is Spanish owing to the Spanish colonization from the 16th to the 19th century; if one includes Brazil, Portuguese would be first.

High life expectancy, the highest Human Development Index of Latin America, high standard of living, significant participation in the global markets and the emerging economy[3] of its members make the Southern Cone the most prosperous macro-region in South America.[2][4][5]

satellital images of the Southern Cone month by month

The climates are mostly temperate, but include humid subtropical, Mediterranean, highland tropical, maritime temperate, sub-Antarctic temperate, highland cold, desert and semi-arid temperate regions. Except for northern regions of Argentina (thermal equator in January), the whole country of Paraguay, the Argentina-Brazil border and the interior of the Atacama desert, the region rarely suffers from heat. In addition to that, the winter presents mostly cool temperatures. Strong and constant wind and high humidity is what brings low temperatures in the winter. The Atacama is the driest place on Earth.

One of the most peculiar plants of the region is the Araucaria tree which can be found in Chile and Argentina. The only native group of conifers found in the southern hemisphere had its origin in the Southern Cone. Araucaria angustifolia, once widespread in Southern Brazil, is now a critically endangered species. The steppe region, situated in central Argentina, Uruguay and southern Brazil is known as the Pampas, and the typical people of the region are a mixture of Spanish and some Amerindian blood, and are called Gauchos. Maritime tropical trees, cold steppes, Mediterranean vegetation and desert plants are also natural occurrences. 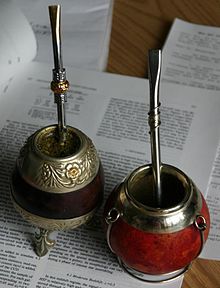 Mate, as shown in the picture, is a typical beverage from the Southern Cone

Besides languages and colonial heritage the states of the Southern Cone share some common cultural traits such as high football popularity and relatively good performance in that sport. This is reflected on the fact that Argentina and Uruguay have both won the FIFA World Cup twice, and Brazil five times, which makes them the only national teams outside Europe to have won the cup. Argentina, Brazil, Chile and Uruguay have all hosted the World Cup.

Other cultural expressions associated with the Southern Cone is the social and culinaire practise of the asado barbecue. The asado was born out of the horsemen and cattle culture of the region, more specifically from the gauchos of Argentina, Brazil, and Uruguay (and southern Chile) and the huasos of Chile. In the Southern Cone horsemen are considered figures of national identity and are as such embodied in the epic poem Martín Fierro. Mate is popular throughout the Southern Cone, especially in Argentina, Paraguay, Uruguay and the state of Rio Grande do Sul in Brazil. In Chile mate is popular in the southern regions and in rural areas of South-central Chile.

In the countries of the Southern Cone 19th- and 20th-century European immigrants have had a high impact on the countries' culture, social life and politics.

The overwhelming majority, including those of recent immigrant background, speak Spanish (in Argentina, Chile, Paraguay, and Uruguay) or Portuguese in the case of Brazil.

The Spanish-speaking countries of the Southern Cone are divided into three main dialects, Paraguayan Spanish which is highly influenced by the Guarani language that is spoken alongside Spanish, the Rioplatense Spanish spoken in Argentina and Uruguay, which its accent and everday language is heavily influenced by Italian, and Chilean Spanish. These dialects share some common traits such as a number of Quechua loanwords and Lunfardo words.

Preliminary research has shown that Rioplatense Spanish, and particularly the speech of the city of Buenos Aires, has intonation patterns that resemble those of Italian dialects, and differ markedly from the patterns of other forms of Spanish.[6] This correlates well with immigration patterns as Argentina, and particularly Buenos Aires, had huge numbers of Italian settlers since the 19th century. The researchers note that this is a relatively recent phenomenon, starting in the beginning of the 20th century with the main wave of Southern Italian immigration.[7]

Autochthonous languages, spoken by some Native American groups include Mapudungun (also known as Mapuche), Quechua, Aymara and Guarani. The first one is primarily spoken in Araucanía and adjacent areas of Patagonia, in southern Argentina and Chile. Guarani is an official language of Paraguay and is spoken in the northeastern Argentine provinces of Corrientes and Misiones where it is an official language along with Spanish.[8]

Furthermore, English is spoken in the Falkland Islands, a disputed territory between the U.K. and Argentina (presently inhabited by British subjects). Welsh is spoken by descendants of immigrants in the Patagonia region of Argentina. Portuñol, Portunhol in Portuguese, is a pidgin language of Brazilian Portuguese and Spanish that is spoken on the border with Brazil. Italian (mostly its Northern dialects, such as Venetian) is spoken in rural communities across Argentina and Southern Brazil. German in some dialects is mostly spoken in Southern Chile and Southern Brazil. Croatian and other Slavic languages are also spoken in the southernmost areas of Chilean Patagonia.

The majority is Roman Catholic, but there are Jewish and Protestants as well (mostly in Argentina and Chile). Religions include Muslims, Anglicans, Lutherans, Eastern Orthodox, Buddhists and Daoists. Jewish communities thrive in Argentina and Uruguay; however, a large proportion of the Argentine Jewish community emigrated to Israel in the aftermath of the Argentine economic crisis at the beginning of the 21st century.[citation needed] Despite some parts of the Southern Cone's religious conservatism, it never curtailed the region's characteristics of social reform. Uruguay, where agnosticism and atheism is very common, has a strong church and state separation policy and could be considered one of the most secular countries in the Americas.[9] Uruguay, Argentina and Chile, in that order, are the least religious countries in South America. According to a poll of Gallup, 51% of Uruguayans, 56% of Argentines, and 60% of Chileans thinks in religion as something important in their lives, contrasting with countries such as Brazil (87%), Bolivia (89%) and Paraguay (92%). Besides, Uruguay (69%), Argentina (58%) and Chile (52%) have the highest percentage of people who think in their countries as a good place to live to gay or lesbian people. This, contrats with countries such as Bolivia (24%), Ecuador (31%) and Peru (32%).[10] 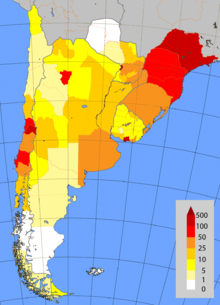 The population of Argentina, Chile and Uruguay is 40, 16.8 and 3.6 million respectively. Buenos Aires is the largest metropolitan area at 13.1 million and Santiago, Chile has 6.4 million. When part of Southeastern Brazil is included, São Paulo is the largest city, with 19.8 million; in the Southern Brazil, the largest metropolitan area is Porto Alegre, with more than 4 million. Uruguay's capital and largest city, Montevideo, has 1.8 million, and it receives many visitors on ferry boats across the Río de la Plata from Buenos Aires, 50 km (31 mi) away. Asunción, Paraguay's capital city has a population of 2.1 million.

Different ethnic groups contributed for the composition of the population of the Southern Cone. The original population, the Amerindians, is in large areas extinct or fused into mestizo populations. As in the rest of South America, in the first centuries of colonization the region was settled by Spanish and Portuguese colonizers and most of them were men. Soon after their arrival, an intensive mixture between those European men and the local Amerindian women began, producing a new population named Mestizo in Hispanophone countries and Caboclo or Mameluco in Brazil. Amerindian ancestry is widespread in the region, mostly through the maternal line, while European ancestry is mostly found on the paternal line. African ancestry is mostly found in Brazil.

A genetic study from 2009, published by the American Journal of Human Biology revealed that the composition of Uruguay is mainly European, but with Native American (which varies from 1% to 20% in different parts of the country) and African (between 7% to 15% in different parts of the country) contributions.[24] The native american contribution in Uruguay was estimated to be at 10%, on average, for the whole population. This number rises to 20% in Tacuarembó and goes down to 2% in Montevideo. Native American mtDNA reaches 62% in Tacuarembó.[25] A genetic study from 2006 found out the following autosomal DNA results for Cerro Largo: 82% degree of European contribution, 8% of Native American ancestry and 10% of African contribution. On the maternal line, mtDNA, the results for Cerro Largo were: 49% European, 30% Native American, and 21% African.[26]

Education and standards of living

The other conspicuous characteristic of the Southern Cone is its relatively high standard of living and quality of life. Chile's, Argentina’s, and Uruguay's HDIs—(0.878), (0.866), and (0.866)—are the highest in Latin America, similar to those of the richest countries in Eastern Europe, such as Slovenia, Croatia or Hungary.[34] Uruguay, where illiteracy technically doesn't exist, reaches the same level in this area, even considering that it faces restrictions to its industrial and economic growth. High life expectancy, health and education access, significant participation in the global markets and the emerging economy profile of its members make the Southern Cone the most prosperous macro-region in Latin America.[35] This is, however, contrasted by high levels of inequality.[36]

During the second half of 20th century, these countries were in some periods ruled by right-wing juntas, military nationalistic dictatorships. Around the 1970s, these regimes collaborated in Plan Cóndor against leftist opposition, including urban guerrillas.[49] However, by the early 1980s Argentina and Uruguay restored their democracies, Chile followed suit in 1990.

Usage of the term

Nowadays, the southernmost states of Brazil (the states of São Paulo, Paraná, Santa Catarina and Rio Grande do Sul) are generally included because they share the same characteristics with Uruguay, Argentina and Chile: above average standard of living, mild climate, high level of industrialization and strong European immigration.[citation needed]