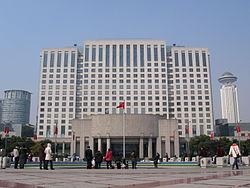 The Politics of Shanghai is structured in a dual party-government system like all other governing institutions in the mainland of the People's Republic of China (PRC). In the last few decades the city has produced many of the country's eventual senior leaders. The city has been important politically to China since the end of the 19th Century.

The Mayor of the Shanghai Municipal People's Government (上海市人民政府市长, abbreviated as 上海市市长) is the highest ranking executive official in Shanghai. Since Shanghai is a direct-controlled municipality of China, the mayor occupies the same level in the order of precedence as provincial governors. However, in the city's dual party-government governing system, the mayor has less power than the Communist Party of China Shanghai Municipal Committee Secretary (中国共产党上海市委员会书记, abbreviated as 中共上海市委书记), colloquially termed the "Shanghai CPC Party chief".

Before 1941, Shanghai had a split administration: the International Settlement (governed under the Shanghai Municipal Council), the French Concession, and the Chinese City. The Chinese city was invaded by the Japanese in 1937 and the foreign concessions were occupied by the Japanese in 1941. After the occupation, the foreign powers formally ceded the territory to the Nationalist Government in Chongqing (a move largely symbolic until the Japanese surrender since the Nationalists no longer controlled Shanghai).

Since Shanghai-born Chen Liangyu took municipal leadership in 2002, because of the increasing friction between the Shanghai clique and the central government under Hu Jintao, Shanghai's economic development has deviated from national policy considerably. Chen believed that wealth produced in Shanghai should stay in Shanghai and benefit only Shanghai citizens. Before Chen was charged with corruption in 2006, Shanghai's level of autonomy alarmed central authorities, as it surpassed that of many autonomous regions.