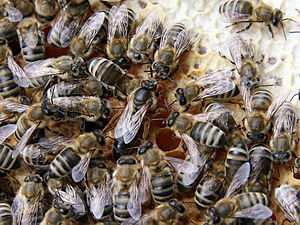 Carniolan queen bee with attendants on a honeycomb.

The term queen bee is typically used to refer to an adult, mated female that lives in a honey bee colony or hive; she is usually the mother of most, if not all, the bees in the hive.[1] The queens are developed from larvae selected by worker bees and specially fed in order to become sexually mature. There is normally only one adult, mated queen in a hive.

The term "queen bee" can be more generally applied to any dominant reproductive female in a colony of a eusocial bee species other than honey bees. 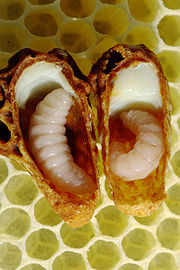 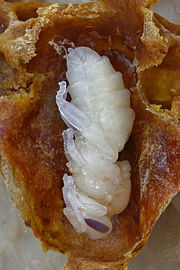 When conditions are favorable for swarming, the queen will start laying eggs in queen cups. A virgin queen will develop from a fertilized egg. The young queen larva develops differently because it is more heavily fed royal jelly, a protein-rich secretion from glands on the heads of young workers. If not for being heavily fed royal jelly, the queen larva would have developed into a regular worker bee. All honey bee larvae are fed some royal jelly for the first few days after hatching but only queen larvae are fed on it exclusively. As a result of the difference in diet, the queen will develop into a sexually mature female, unlike the worker bees.

Queens are raised in specially constructed queen cells. The fully constructed queen cells have a peanut-like shape and texture. Queen cells start out as queen cups. Queen cups are larger than the cells of normal brood comb and are oriented vertically instead of horizontally. Worker bees will only further build up the queen cup once the queen has laid an egg in a queen cup. In general, the old queen starts laying eggs into queen cups when conditions are right for swarming or supersedure. Swarm cells hang from the bottom of a frame while supersedure queens or emergency queens are generally raised in cells built out from the face of a frame.

As the young queen larva pupates with her head down, the workers cap the queen cell with beeswax. When ready to emerge, the virgin queen will chew a circular cut around the cap of her cell. Often the cap swings open when most of the cut is made, so as to appear like a hinged lid.

During swarming season, the old queen will likely leave with the prime swarm before the first virgin queen emerges from a queen cell.

A virgin queen is a queen bee that has not mated with a drone. Virgins are intermediate in size between workers and mated, laying queens, and are much more active than the latter. They are hard to spot while inspecting a frame, because they run across the comb, climbing over worker bees if necessary, and may even take flight if sufficiently disturbed. Virgin queens can often be found clinging to the walls or corners of a hive during inspections.

Virgin queens appear to have little queen pheromone and often do not appear to be recognized as queens by the workers. A virgin queen in her first few hours after emergence can be placed into the entrance of any queenless hive or nuc and acceptance is usually very good, whereas a mated queen is usually recognized as a stranger and runs a high risk of being killed by the older workers.

When a young virgin queen emerges from a queen cell, she will generally seek out virgin queen rivals and attempt to kill them. Virgin queens will quickly find and kill (by stinging) any other emerged virgin queen (or be dispatched themselves), as well as any unemerged queens. Queen cells that are opened on the side indicate that a virgin queen was likely killed by a rival virgin queen. When a colony remains in swarm mode after the prime swarm has left, the workers may prevent virgins from fighting and one or several virgins may go with after-swarms. Other virgins may stay behind with the remnant of the hive. As many as 21 virgin queens have been counted in a single large swarm. When the after-swarm settles into a new home, the virgins will then resume normal behavior and fight to the death until only one remains. If the prime swarm has a virgin queen and the old queen, the old queen will usually be allowed to live. The old queen continues laying. Within a couple of weeks she will die a natural death and the former virgin, now mated, will take her place.

Unlike the worker bees, the queen's stinger is not barbed. The queen can sting repeatedly without dying.

Piping describes a noise made by virgin and mated queen bees during certain times of the virgin queens' development. Fully developed virgin queens communicate through vibratory signals: "quacking" from virgin queens in their queen cells and "tooting" from queens free in the colony, collectively known as piping. A virgin queen may frequently pipe before she emerges from her cell and for a brief time afterwards. Mated queens may briefly pipe after being released in a hive.

Piping is most common when there is more than one queen in a hive. It is postulated that the piping is a form of battle cry announcing to competing queens and the workers their willingness to fight. It may also be a signal to the worker bees which queen is the most worthwhile to support.

The piping sound is a G♯ or A♮. The adult queen pipes for a two-second pulse followed by a series of quarter-second toots.[2] The queens of Africanized bees produce more vigorous and frequent bouts of piping.

The surviving virgin queen will fly out on a sunny, warm day to a "drone congregation area" where she will mate with 12-15 drones. If the weather holds, she may return to the drone congregation area for several days until she is fully mated. Mating occurs in flight. The young queen stores sperm from multiple drones in her spermatheca. She will selectively release sperm for the remaining 2–7 years of her life.

The young virgin queen has a limited time to mate. If she is unable to fly for several days because of bad weather and remains unmated, she will become a "drone layer." Drone-laying queens usually signal the death of the colony, because the workers have no fertilized (female) larvae from which to raise worker bees or a replacement queen.

A special, rare case of reproduction is thelytoky: the reproduction of female workers or queens by laying worker bees. Thelytoky occurs in the Cape bee, Apis mellifera capensis, and has been found in other strains at very low frequency.

Small "Emergency" queen cells on the face of a frame.

Supersedure is the process by which an old queen bee is replaced by a new queen. Supersedure may be initiated due to old age of a queen or a diseased or failing queen. As the queen ages her pheromone output diminishes.

Supersedure may be forced by a beekeeper. For example, by clipping off one of the middle or posterior legs from the queen, she will be unable to properly place her eggs at the bottom of the brood cell. The workers will detect this and will then rear replacement queens.

When a new queen is available, the workers will kill the reigning queen by "balling" her, colloquially known as "cuddle death"; clustering tightly around her until she dies from overheating. This method is also used to kill large predatory wasps that enter the hive and may be used against a foreign queen attempting to take over an existing colony.[3] Balling is often a problem for beekeepers attempting to introduce a replacement queen.

If a queen suddenly dies the workers will flood several cells, where a larva has just emerged, with royal jelly. The young larva floats on the royal jelly. The worker bees then build a larger queen cell from the normal sized worker cell and it protrudes vertically from the face of the brood comb. Emergency queens are usually smaller and less prolific, and therefore not preferred by beekeepers. Sometimes a new queen bee is born while the other is still in charge. To determine the new queen, the two queen bees fight to the death[clarification needed].

Daily life for the queen 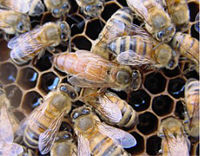 Although the name might imply it, a queen does not directly control the hive. Her sole function is to serve as the reproducer. A well-mated and well-fed queen of quality stock can lay about 2,000 eggs per day during the spring build-up — more than her own bodyweight in eggs every day. She is continuously surrounded by worker bees who meet her every need, giving her food and disposing of her waste. The attendant workers also collect and then distribute queen mandibular pheromone, a pheromone that inhibits the workers from starting queen cells.[4]

The queen lays a fertilized (female) or unfertilized (male) egg according to the width of the cell. Drones are raised in cells that are significantly larger than the cells used for workers. The queen fertilizes the egg by selectively releasing sperm from her spermatheca as the egg passes through her oviduct.

The queen bee's abdomen is noticeably longer than the worker bees surrounding her. Even so, in a hive of 60,000 to 80,000 honey bees, it is often difficult for beekeepers to find the queen with any speed; for this reason, many queens in non-feral colonies are marked with a light daub of paint on their thorax. The paint used does no harm to the queen and makes her much easier to find when necessary.

Although the color is sometimes randomly chosen, professional queen breeders use a color that identifies the year a queen hatched, which helps them to decide whether their queens are too old to maintain a strong hive and need to be replaced. Sometimes tiny convex disks marked with identification numbers ("opalithplattchen") are used when a beekeeper has many queens born in the same year. The color code that beekeepers use to tell them the age of their queen is, (White)(Yellow)(Red)(Green)(Blue).

Beekeepers use several different methods to raise more queens and mate them. Examples are the Jenter kit, walk-away split, grafting, Cloake board, artificial insemination, and a mating yard.