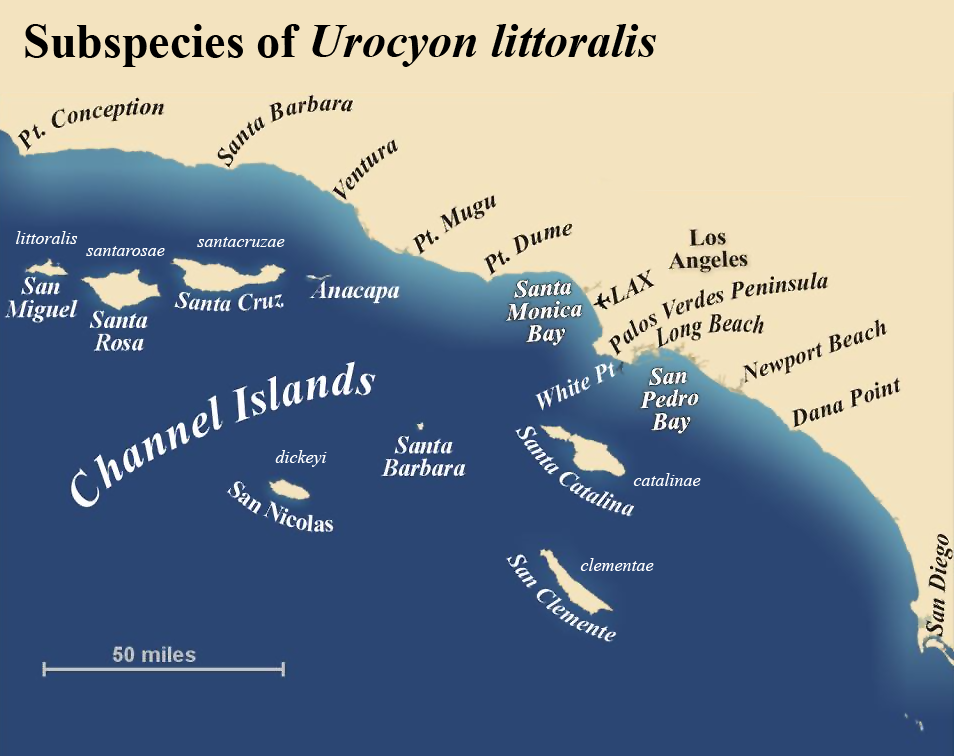 The Island Fox shares the "" with the mainland , the species from which it is descended. Its small size is a result of , a kind of . Because the Island Fox is geographically isolated, it has no immunity to s and diseases brought in from the mainland and is especially vulnerable to those the may carry. In addition, predation by the and human activities devastated fox numbers on several of the Channel Islands in the 1990s. Four Island Fox subspecies were federally protected as an in 2004, and efforts to rebuild fox populations and restore the ecosystems of the Channel Islands are being undertaken.

There are six subspecies of the Island Fox,

Foxes from each island are capable of interbreeding, but have genetic and phenotypic distinctions that make them unique; for example, the subspecies have differing numbers of tail .

The small size of the Island Fox is an adaptation to the limited resources available in the island environment. The foxes are believed to have "rafted" to the northern islands between 10,400 and 16,000 years ago.

The Island Fox has gray fur on its head, a ruddy red coloring on its sides, white fur on its belly, throat and the lower half of its face, and a black stripe on the dorsal surface of its tail. In general the coat is darker and duller hued than that of the Gray Fox. The Island Fox s once a year between August and November. Before the first molt pups are woolly and have a generally darker coat than adult foxes.

The Island Fox typically forms breeding pairs which are frequently seen together beginning in January and through the breeding season, from late February to early March. The period is 50&ndash;63 days. The Island Fox gives birth in a den, a typical litter having one to five kits, with an average of two or three. Kits are born in the spring and emerge from the den in early summer; the mother lactates for 7&ndash;9 weeks. Sexual maturity is reached at 10 months, and the females usually breed within the first year. Island Foxes live for 4&ndash;6 years in the wild and for up to 8 years in captivity.

Its preferred habitat is complex layer vegetation with a high density of woody, perennially fruiting shrubs. The fox lives in all of the island s including temperate forest, temperate and , with no island supporting more than 1,000 foxes. The Island Fox eats s, s, s, eggs, s, s, and small s, including deer mice. The fox tends to move around by itself, rather than in packs. It is generally nocturnal, albeit with peaks of activity at dawn and dusk. Activity also fluctuates with the season; it is more active during the day in summer than it is in winter.

The Island Fox is not intimidated by humans, although at first may show aggression. It is quite easy to tame and is generally docile. The Island Fox communicates using auditory, olfactory and visual signals. A dominant fox uses vocalizations, staring, and ear flattening to cause another fox to submit. The Island Fox marks territory with urine and feces.

predation is the primary cause of Island Fox mortality. The Golden Eagle was an uncommon visitor to the Channel Islands before the 1990s according to the National Park Service records, and the first Golden Eagle nest was recorded on Santa Cruz Island in 1999.

Introduced diseases or parasites can devastate Island Fox populations. Because the Island Fox is isolated, it has no immunity to s and diseases brought in from the mainland and are especially vulnerable to those the Domestic Dog may carry. A outbreak in 1998 killed approximately 90% of Santa Catalina Island's fox population. (It is difficult to vaccinate against or treat foxes for parasites and disease in the wild.)

Diminished food supply and general degradation of the habitat due to introduced mammal species, including cats, pigs, sheep, goats, and , the latter having been introduced to Catalina Island in the 1920s by a film crew shooting a Western, also has had a negative effect on fox populations.

A key to the recovery of the Island Fox is the removal of the Golden Eagle from the Channel Islands, ecosystem restoration and disease control. To ensure survival of the Island Fox, Golden Eagles are being moved from the northern islands to the mainland. Maintaining and increasing the Bald Eagle population on the islands would help to displace the Golden Eagle. However, the program is extremely resource-intensive and is at risk for cancellation . Removal of feral pigs from Catalina Island and Santa Cruz Island is underway, removing both the golden eagles food and competition for the Island Fox. To eliminate the risk of disease, pets are not permitted in . A vaccination program has been initiated to protect Catalina Island foxes from canine distemper. [Catalina Island Conservancy. [http://www.catalinaconservancy.org/ecology/actions/fox.cfm Catalina Island Fox] ]

Because the Channel Islands are almost entirely owned and controlled by either the Catalina Island Conservancy or the federal government, the fox has a chance to receive the protection it needs, including constant supervision by interested officials without the ongoing threat of human encroachment on its habitat.