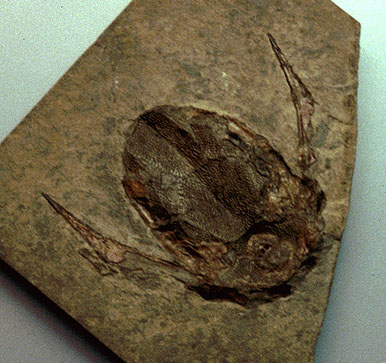 "Bothriolepis" ("pitted scale" or "trench scale") was the most successful of s, if not the most successful genus of any placoderm, with over 100 species found on every continent. It was a small freshwater which lived in the Middle and Late (387–360 million years ago). Because the fossils are found in freshwater sediments, "Bothriolepis" is presumed to have spent most of its life in rivers and lakes, but was probably able to enter salt water as well because its range appeared to have corresponded with the Devonian continental coastlines. Many paleontologists hypothesize that they were , that is, they actually lived in saltwater, and returned to freshwater to breed, similar to . Its box-like body was enclosed in armor plates, providing protection from predators.

It had a heavily armoured head fused with the shield. It had a long pair of spine-like s, joined at two points: one where the arm leaves the trunk and one a little more than half way along, which would have helped to lift it from the bottom; its heavy body would have sunk quickly back to the bottom as soon as forward momentum was lost. The fins possessed spines, and an articulation to the boxlike trunk. "Bothriolepis" had a peculiar spiral, sediment-filled gut and probably grubbed in the mud. It may also have used its pectoral fins to throw sediment (mud, sand or otherwise) over itself.

There are two openings through its head: a keyhole opening along the midline on the upper side for the eyes and nostrils and a mouth on the lower side near the front. It also had a special feature on its skull, a separate partition of bone below the opening for the eyes and nostrils enclosing the nasal capsules called a . It had gills in addition to a pair of pouches off the that, according to scientific speculation, may have functioned as lungs. "Bothriolepis" had a slender fish-like tail that extended behind the heavily armored portion, which is unfortunately rarely preserved in fossils.