Benjamin Obadiah Iqbal Zephaniah (born 15 April 1958, Birmingham, England)[1] is an English writer and dub poet. He is a well-known figure in contemporary English literature, and was included in The Times list of Britain's top 50 post-war writers in 2008.[2]

Zephaniah was born and raised in the Handsworth district of Birmingham,[3] which he called the "Jamaican capital of Europe". He is the son of a Barbadian postman and a Jamaican nurse.[4][5] A dyslexic, he attended an approved school but left aged 13 unable to read or write.[5]

He writes that his poetry is strongly influenced by the music and poetry of Jamaica and what he calls "street politics". His first performance was in church when he was ten, and by the age of fifteen, his poetry was already known among Handsworth's Afro-Caribbean and Asian communities.[6] He received a criminal record with the police as a young man and served a prison sentence for burglary.[5][7] Tired of the limitations of being a black poet communicating with black people only, he decided to expand his audience, and headed to London at the age of twenty-two.[4]

He became actively involved in a workers co-operative in Stratford, London, which led to the publication of his first book of poetry, called Pen Rhythm, published by Page One Books in 1980. Three editions were published. Zephaniah has said that his mission is to fight the dead image of poetry in academia, and to "take [it] everywhere" to people who do not read books so he turned poetry readings into concert-like performances.[4]

His second collection of poetry, The Dread Affair: Collected Poems (1985) contained a number of poems attacking the British legal system. Rasta Time in Palestine (1990), an account of a visit to the Palestinian occupied territories, contained poetry and travelogue.

His album Rasta, which featured The Wailers' first recording since the death of Bob Marley as well as a tribute to Nelson Mandela, gained him international prestige[8] and topped the Yugoslavian pop charts.[6][8] It was because of this recording that he was introduced to the political prisoner and soon-to-be South African president Nelson Mandela, and in 1996, Mandela requested that Zephaniah host the president's Two Nations Concert at the Royal Albert Hall, London. Zephaniah was poet in residence at the chambers of Michael Mansfield QC, and sat in on the inquiry into Bloody Sunday and other cases, these experiences leading to his Too Black, Too Strong poetry collection (2001).[5] We Are Britain! (2002) is a collection of poems celebrating cultural diversity in Britain.

Benjamin Zephaniah became a very successful children's poet with his first book of poetry for children called Talking Turkeys which had to go into an emergency reprint after just six weeks. In 1999 he wrote an immensely successful novel for teenagers, Face, the first of four novels to date.

Zephaniah lived for many years in East London but since 2008 has divided his time between Beijing and a village near Spalding, Lincolnshire.[9] He also lived in Indonesia for 5 years.[citation needed]

He was married for twelve years to Amina, a theatre administrator, who left him in 2001.[10]

In November 2003, Zephaniah wrote in The Guardian that he had turned down an OBE from the Queen because it reminded him of "how my foremothers were raped and my forefathers brutalised."[11]

Zephaniah is a well known supporter of Aston Villa F.C. and is the patron for an Aston Villa supporters' website.[12]

Zephaniah is an honorary patron of The Vegan Society,[13] Viva! (Vegetarians International Voice for Animals),[14] EVOLVE! Campaigns,[15] the anti-racism Newham Monitoring Project, Tower Hamlets Summer University and an animal rights advocate. In 2004 he wrote the foreword to Keith Mann's book From Dusk 'til Dawn: An insider's view of the growth of the Animal Liberation Movement, a book about the Animal Liberation Front. In August 2007, he announced that he would be launching the Animal Liberation Project, alongside People for the Ethical Treatment of Animals.[16] He became a vegan when he read poems about shimmering fish floating in an underwater paradise, and birds flying free in the clear blue sky.

The poet joined Amnesty International in speaking out against homophobia in Jamaica, saying "For many years Jamaica was associated with freedom fighters and liberators, so it hurts when I see that the home of my parents is now associated with the persecution of people because of their sexual orientation."[17]

Zephaniah has spoken in favour of a British Republic and the dis-establishment of the crown.[18]

Zephaniah appeared in literature to support changing the British electoral system from first-past-the-post to alternative vote for electing Members of Parliament to the House of Commons in the Alternative Vote referendum in 2011.[19]

He is a supporter of the Green Party of England and Wales.[citation needed] 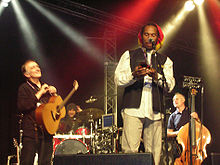 Collecting the Hancock at Cambridge Folk Festival 2008 with Martin Carthy looking on.

He has released several albums of original music.[21] He was awarded Best Original Song in the Hancocks 2008, Talkawhile Awards for Folk Music (as voted by members of Talkawhile.co.uk[22]) for his version of Tam Lyn Retold recorded with The Imagined Village. He collected the Award live at The Cambridge Folk Festival on 2 August 2008 and described himself as a "Rasta Folkie".[23]