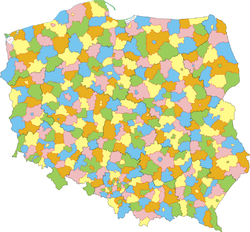 Division of Poland into powiats (counties)

A powiat (pronounced [ˈpɔvjat]; Polish plural powiaty) is the second-level unit of local government and administration in Poland, equivalent to a county, district or prefecture (LAU-1, formerly NUTS-4) in other countries. The term powiat is most often translated into English as "county", although other terms are also sometimes used. It is arguably preferred to leave such national labels for levels of government untranslated to avoid the false suggestion of resemblance to e.g. the UK structure of government (Bankauskaite et al. 2007).

A powiat is part of a larger unit or province called a voivodeship (Polish województwo). In turn a powiat is usually subdivided into gminas (sometimes called municipalities or communes). However the more important towns and cities function as separate counties in their own right, with no subdivision into gminas. These are called city counties (Polish powiaty grodzkie, or more formally miasta na prawach powiatu, meaning "towns with the rights of a powiat") and have roughly the same status as former county boroughs in the UK. The other, true powiats are called land counties (Polish powiaty ziemskie).

As of 2008 there are 379 powiat-level entities in Poland: 314 land counties and 65 city counties. For a complete alphabetical listing, see List of counties in Poland. For tables of counties by voivodeship, see the articles on the individual voivodeships (Greater Poland Voivodeship etc.).

The history of Polish powiats goes back to the second half of the 14th century. They remained the basic unit of territorial organization in Poland, then in the Polish-Lithuanian Commonwealth, until the latter's partitioning in 1795.

In the 19th century, the powiats continued to function in the part of Poland that had been incorporated into the Russian Empire ("Congress Poland") and, as the Polish equivalent of the German "Kreis" in the German-governed Grand Duchy of Poznań.

After Poland regained independence in 1918, the powiats again became the basic territorial units throughout the country.

Powiats were abolished in 1975 in favour of a larger number of voivodeships, but were reintroduced on 1 January 1999. This reform also created 16 larger voivodeships.

Legislative power within a powiat is vested in an elected council (rada powiatu), while local executive power is vested in the starosta, who is elected by that council. The administrative offices headed by the starosta are called the starostwo. However in city counties these institutions do not exist separately – their powers and functions are exercised by the city council (rada miasta), the directly-elected mayor (burmistrz or prezydent), and the city offices (urząd miasta).

In some cases a powiat has its seat outside its own territory. For example, Poznań County (powiat poznański) has its offices in Poznań, although Poznań is itself a city county, and is therefore not part of Poznań County.

Powiats have relatively limited powers, since many local and regional matters are dealt with either at gmina or voivodeship level. Some of the main areas in which the powiat authorities have decision-making powers and competences include:

The Polish name of a land county consists of the word powiat followed by a masculine-gender adjective (since powiat is a masculine noun). In most cases this is the adjective formed from the name of the town or city where the county has its seat. Thus the county with its seat at the town of Kutno is named powiat kutnowski (Kutno County). Note that in modern Polish both parts of the name are written in lower case; however, names of powiats in Grand Duchy of Poznań were written in upper case. If the name of the seat comprises a noun followed by an adjective, as in Maków Mazowiecki ("Mazovian Maków"), the adjective will generally be formed from the noun only (powiat makowski). There are also a few counties whose names are derived from the names of two towns (such as powiat czarnkowsko-trzcianecki, Czarnków-Trzcianka County), from the name of a city and a geographical adjective (powiat łódzki wschodni, Łódź East County), or a mountain range (powiat tatrzański, Tatra County).

There is more than one way to render such names in English. A common method is to translate the names as "(something) County", as in the examples above. (This is the system used as standard in Wikipedia.) Thus in most cases the English name for a powiat consists of the name of the city or town which is its seat, followed by the word County.

Note that different counties sometimes have the same name in Polish, since the names of different towns may have the same derived adjective. For example, the counties with their seats at Grodzisk Wielkopolski and Grodzisk Mazowiecki are both called powiat grodziski, and those with seats at Brzeg and Brzesko are both called powiat brzeski. In English this ambiguity either does not occur (Brzeg County and Brzesko County) or can be avoided by using the complete name of the seat (Grodzisk Wielkopolski County and Grodzisk Mazowiecki County).

This article incorporates information from the revision as of 25 January 2008 of the equivalent article on the Polish Wikipedia.