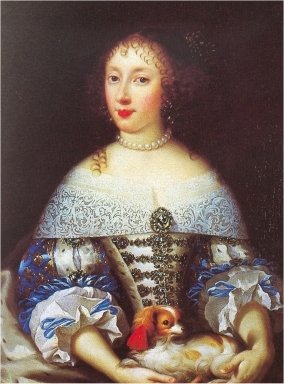 Henrietta Anne of England, duchesse d'Orléans (born Henrietta (Old Style) (New Style) 1644 – ), in French "Henriette d'Angleterre", known familiarly as Minette, was the youngest daughter of King Charles I of and . The Jacobite claims to the throne following the death of descend from her.

After her marriage to "Monsieur", Philippe d'Orléans, brother of king Louis XIV, she became known as "Madame" at court.

Henrietta was born at Bedford House, , at a time when the was raging across the land. Two weeks after Henrietta's birth, her mother, the Queen, fled the country leaving her in the care of Lady Villiers. Henrietta Anne (the "Anne" was added after she was baptized into the Catholic Church) was not reunited with her mother until she was two years old. After her father, Charles I, was beheaded in 1649, and a republic was proclaimed in , her mother brought her to France to live at the court of her nephew, King Louis XIV.

At the age of seventeen, Princess Henrietta married her first cousin, , who was the younger son of her maternal uncle Louis XIII and the only brother of Louis XIV. The wedding was held at the chapel in on . The marriage was unhappy, and her husband preferred the affections of his gentlemen, who vied with Henrietta for powerFact|date=September 2008.

Louis XIV was very close to his sister-in-law, and the two were possibly loversFact|date=June 2008. Louis' mourning of her after her tragic death was even greater than that of Philippe, her husband, lending credence to that theoryFact|date=June 2008. However, Philippe was extremely jealous of his wife, possibly abusive , and paraded a succession of male lovers before her .

Popular at court, much to Philippe's annoyance, Henriette was known as a pretty, good-natured girl who enjoyed flirting. She soon attracted the attention of her husband's older brother. In order to hide their attraction from the king's mother and wife, Henriette and Louis invented the story that he was constantly in Henriette's company in order to be close to one of her ladies-in-waiting, . Only later did Henriette realize that the ruse had been so successful that Louis had indeed begun an affair with Louise [cite book | last = Hartmann | first = Cyril Hughes | title = The King, my brother | publisher = William Heinemann | year = 1954 | location =London | pages = | url = | id = [http://www.worldcatlibraries.org/oclc/2292261 OCLC: 2292261] [http://www.amazon.com/dp/B000GBX3JS ASIN: B000GBX3JS] ] .

Reluctantly and somewhat bitterly, Henriette stepped aside. Later, she seems to have taken one of her husband's earlier conquests, the comte de Guiche, as a lover [Barker, Nancy Nichols, "Brother to the Sun king: Philippe, Duke of Orléans", Johns Hopkins University Press, 1989.] . This caused all sorts of arguments at the Palais Royal, the Orléans residence in Paris.

Despite the marital dissension between "Monsieur" and "Madame", several children were born of the union. Some believed at the time that the King was the real father of Henrietta's two daughtersFact|date=September 2008:
*Marie Louise d'Orléans ( &ndash; )
**She was the first wife of .
*Philippe Charles, duc de Valois [http://nygaard.howards.net/files/4/4031.htm Title of "Valois"] , (July 16 1664 &ndash; 8 December 1666)
*A daughter born ; died soon after.
*Anne Marie d'Orléans ( [http://nygaard.howards.net/files/4/4031.htm Date of birth] &ndash; )
**First wife of , first King of Sardinia, whom she wed in 1684.
**ancestress of the Kings of Sardinia and Kings of Italy
**through her derives the post-Stuart legitimist claim of the Jacobites to the English and Scottish thrones.

By the time of the birth of Anne Marie, the couple was notorious for their constant arguing at court and at home in the Palais Royal. [ib. Barker, Nancy Nichols, "Brother to the Sun king: Philippe, Duke of Orléans".] Philippe now had a new lover, and many were aware of the great influence this man had over Philippe.

The favorites of "Monsieur", invariably younger, handsome men, would dominate contemporary and historical commentary about his role at court, particularly with one man who shared his princely rank and much of his life:

Under these circumstances, it is no surprise that "Monsieur's" first marriage was not a happy one. In January 1670, his wife prevailed upon the King to imprison the chevalier, first near , then in the Mediterranean island-fortress of the , and finally he was banished to . But by February "Monsieur's" protests and pleas persuaded the King to restore him to his brother's .

Today, Henrietta is best known through her correspondence with her brother King Charles II of England, with whom she was very close. With her brother, she helped to negotiate the "" (1670), which was an offensive and defensive alliance between and . She died at the Château de Saint-Cloud, near on June 30, 1670, just two weeks after the treaty was signed. At the time of her death, it was widely believed that Henrietta-Anne had been poisoned by friends of her husband’s jealous lover and exiled favourite, the Chevalier de Lorraine. An autopsy was performed, however, and it was reported that Henrietta-Anne had died of caused by a perforated . [Robinson, James, "The History of Gastric Surgery, chapter 20, page 239. "The History of Gastroenterology."] At her funeral, the well-known orator conducted her eulogy, the famous "Oraison funèbre d'Henriette d'Angleterre".

*Her eldest daughter died without issue.
*Through her youngest daughter, Anne Marie, she is a direct ancestor of and his descendants, the last Bourbon Kings of France before the reign of Louis Philippe, King of the French, a descendant of her husband and his second wife.