A detector is a device that recovers information of interest contained in a modulated wave. The term dates from the early days of radio when all transmissions were in Morse code, and it was only necessary to detect the presence (or absence) of a radio wave using a device such as a coherer without necessarily making it audible. A more up-to-date term is demodulator, but "detector" has a history of many decades of use, even if it is a misnomer. 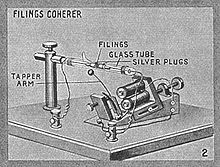 A coherer detector, useful only for Morse code signals.

An early form of envelope detector was the cat's whisker, which was used in the crystal set radio receiver.

A product detector is a type of demodulator used for AM and SSB signals. Rather than converting the envelope of the signal into the decoded waveform like an envelope detector, the product detector takes the product of the modulated signal and a local oscillator, hence the name. At least partially, it multiplies the signal by the output of the local oscillator. This can be accomplished by heterodyning. The received signal is mixed, in some type of nonlinear device, with a signal from the local oscillator, to produce an intermediate frequency, referred to as the beat frequency, from which the modulating signal is detected and recovered.

AM detectors cannot demodulate FM and PM signals because both have a constant amplitude. However an AM radio may detect the sound of an FM broadcast by the phenomenon of slope detection which occurs when the radio is tuned slightly above or below the nominal broadcast frequency. Frequency variation on one sloping side of the radio tuning curve gives the amplified signal a corresponding local amplitude variation, to which the AM detector is sensitive. Slope detection gives inferior distortion and noise rejection compared to the following dedicated FM detectors that are normally used.

In phase demodulation the information is contained in the amount and rate of phase shift in the carrier wave.

The Foster-Seeley discriminator[1][2] is a widely used FM detector. The detector consists of a special center-tapped transformer feeding two diodes in a full wave DC rectifier circuit. When the input transformer is tuned to the signal frequency, the output of the discriminator is zero. When there is no deviation of the carrier, both halves of the center tapped transformer are balanced. As the FM signal swings in frequency above and below the carrier frequency, the balance between the two halves of the center-tapped secondary is destroyed and there is an output voltage proportional to the frequency deviation. 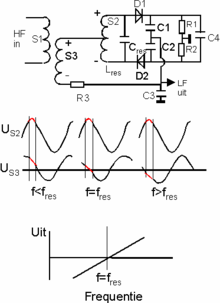 In quadrature detectors, the received FM signal is split into two signals. One of the two signals is then passed through a high-reactance capacitor, which shifts the phase of that signal by 90 degrees. This phase-shifted signal is then applied to an LC circuit, which is resonant at the FM signal's unmodulated, "center," or "carrier" frequency. If the received FM signal's frequency equals the center frequency, then the two signals will have a 90-degree phase difference and they are said to be in "phase quadrature" — hence the name of this method. The two signals are then multiplied together in an analog or digital device, which serves as a phase detector; that is, a device whose output is proportional to the phase difference between two signals. In the case of an unmodulated FM signal, the phase detector's output is — after the output has been filtered; that is, averaged over time — constant; namely, zero. However, if the received FM signal has been modulated, then its frequency will vary from the center frequency. In this case, the resonant LC circuit will further shift the phase of the signal from the capacitor, so that the signal's total phase shift will be the sum of the 90 degrees that's imposed by the capacitor and the positive or negative phase change that's imposed by the LC circuit. Now the output from the phase detector will differ from zero, and in this way, one recovers the original signal that was used to modulate the FM carrier.

This detection process can also be accomplished by combining, in an exclusive-OR (XOR) logic gate, the original FM signal and a square wave whose frequency equals the FM signal's center frequency. The XOR gate produces an output pulse whose duration equals the difference between the times at which the square wave and the received FM signal pass through zero volts. As the FM signal's frequency varies from its unmodulated center frequency (which is also the frequency of the square wave), the output pulses from the XOR gate become longer or shorter. (In essence, this quadrature detector converts an FM signal into a pulse-width modulated (PWM) signal.) When these pulses are filtered, the filter's output rises as the pulses grow longer and its output falls as the pulses grow shorter. In this way, one recovers the original signal that was used to modulate the FM carrier.

Less common, specialized, or obsolescent types of detectors include [7]:

The phase-locked loop detector requires no frequency-selective LC network to accomplish demodulation. In this system, a voltage controlled oscillator (VCO) is phase locked by a feedback loop, which forces the VCO to follow the frequency variations of the incoming FM signal. The low-frequency error voltage that forces the VCO's frequency to track the frequency of the modulated FM signal is the demodulated audio output.

Simple block diagrams and descriptions of key circuits for FM transmitters and receivers: [1]