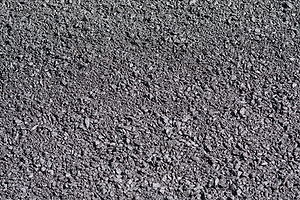 As shown in this cross-section, many older roadways are smoothed by applying a thin layer of asphalt concrete to the existing portland cement concrete. 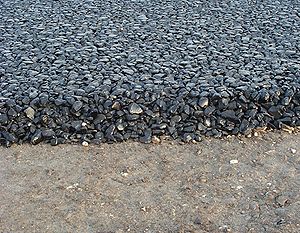 A layer of asphalt concrete. In road construction, a base layer of crushed rock is usually laid down first to increase durability (see photo below) 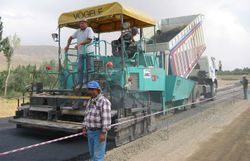 Asphalt concrete is a composite material commonly used in construction projects such as road surfaces, airports and parking lots. It consists of asphalt (used as a binder) and mineral aggregate mixed together, then laid down in layers and compacted. It is also increasingly used as the core for embankment dams.[1]

The terms "asphalt (or asphaltic) concrete", "bituminous asphalt concrete" and the abbreviation "AC" are typically used only in engineering and construction documents and literature. Asphalt concrete pavements are often called just "asphalt" by laypersons who tend to associate the term concrete with Portland cement concrete only. The engineering definition of concrete is any composite material composed of mineral aggregate glued together with a binder, whether that binder is Portland cement, asphalt or even epoxy. Informally, asphalt concrete is also referred to as "blacktop", particularly in North America.

Mixing of asphalt and aggregate is accomplished in one of several ways:

Superpave, short for "superior performing asphalt pavement," is a pavement system designed to provide longer lasting roadways. Key components of the system are careful selection of binders and aggregates, volumetric proportioning of ingredients, and evaluation of the finished product.

The bitumen aggregate mixture is cooked (matured) for around 6-8 hours and once it is ready the mastic asphalt mixer is transported to the work site where experienced layers empty the mixer and either machine or hand lay the mastic asphalt contents on to the road. Mastic asphalt concrete is generally laid to a thickness of around 3⁄4–1 3⁄16 inches (20-30 mm) for footpath and road applications and around 3⁄8 of an inch (10 mm) for flooring or roof applications.
In addition to the asphalt and aggregate, additives, such as polymers, and antistripping agents may be added to improve the properties of the final product. 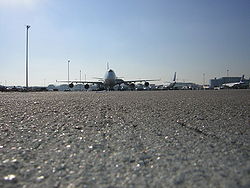 A landing strip, one of the uses of asphalt concrete

Asphalt concrete pavements—especially those at airfields—are sometimes called tarmac for historical reasons, although they do not contain tar and are not constructed using the macadam process. 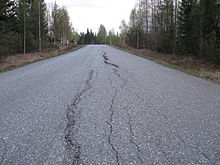 Asphalt damaged by frost heave, or freezing of groundwater.

Asphalt deterioration can include crocodile cracking, potholes, upheaval, raveling, rutting, shoving, stripping, and grade depressions. In cold climates, freezing of the groundwater underneath can crack asphalt even in one winter (by frost heaving). Filling the cracks with bitumen can temporarily fix the cracks, but only proper construction, i.e. allowing water to drain away from under the road, can slow this process.

Factors that cause asphalt concrete to deteriorate over time mostly fall into one of two categories: Environmental factors and traffic loads. Often, damage results from combinations of factors in both categories.

Environmental factors include heat and cold, the presence of water in the subbase or subgrade soil underlying the pavement, and frost heaves.

Water trapped under the pavement softens the subbase and subgrade, making the road more vulnerable to traffic loads. Water under the road freezes and expand in cold weather, causing and enlarging cracks to form. In spring thaw, the ground thaws from the top down, so water is trapped between the pavement above and the still-frozen soil underneath. This layer of saturated soil provides little support for the road above, leading to the formation of potholes. This is more of a problem for silty or clay soils than sandy or gravelly soils. Some jurisdictions pass frost laws to reduce the allowable weight of trucks during the spring thaw season and protect their roads.

Traffic damage mostly results from trucks and busses. The damage a vehicle causes is proportional to the axle load raised to the fourth power [5], so doubling the weight an axle carries actually causes 16 times as much damage. Wheels cause the road to flex slightly, resulting in fatigue cracking, which often leads to crocodile cracking. Vehicle speed also plays a role. Slowly moving vehicles stress the road over a longer period of time, increasing ruts, cracking, and corrugations in the asphalt pavement.

Other causes of damage include heat damage from vehicle fires, or solvent action from chemical spills.

Prevention and repair of degradation

The life of a road can be prolonged through good design, construction and maintenance practices. During design, engineers measure the traffic on a road, paying special attention to the number and types of trucks. They also evaluate the subsoil to see how much load it can withstand. The pavement and subbase thicknesses are designed to withstand the wheel loads. Sometimes, geogrids are used to reinforce the subbase and further strengthen the roads. Drainage, including ditches, storm drains and underdrains are used to remove water from the roadbed, preventing it from weakening the subbase and subsoil.

Good maintenance practices center on keeping water out of the pavement, subbase and subsoil. Maintaining and cleaning ditches and storm drains will extend the life of the road at low cost. Sealing small cracks with bituminous crack sealer prevents water from enlarging cracks through frost weathering, or percolating down to the subbase and softening it. For somewhat more distressed roads, a chip seal or similar surface treatment may be applied. As the number, width and length of cracks increases, more intensive repairs are needed. In order of generally increasing expense, these include thin asphalt overlays, multicourse overlays, grinding off the top course and overlaying, in-place recycling, or full-depth reconstruction of the roadway.

It is far less expensive to keep a road in good condition than it is to repair it once it has deteriorated. This is why some agencies place the priority on preventive maintenance of roads in good condition, rather than reconstructing roads in poor condition. Poor roads are upgraded as resources and budget allow. In terms of lifetime cost and long term pavement conditions, this will result in better system performance. Agencies that concentrate on restoring their bad roads often find that by the time they've repaired them all, the roads that were in good condition have deteriorated.[6]

Some agencies use a pavement management system to help prioritize maintenance and repairs.

Several in-place recycling techniques have been developed to rejuvenate oxidized binders and remove cracking, although the recycled material is generally not very water-tight or smooth and should be overlaid with a new layer of asphalt concrete. Cold in-place recycling mills off the top layers of asphalt concrete and mixes the resulting loose millings with asphalt emulsion. The mixture is then placed back down on the roadway and compacted. The water in the emulsion is allowed to evaporate for a week or so, and new hot-mix asphalt is laid on top.

Asphalt concrete that is removed from a pavement is usually stockpiled for later use as aggregate for new hot mix asphalt. This reclaimed material, commonly known by the acronym 'RAP' for recycled or reclaimed asphalt pavement, is crushed to a consistent gradation and added to the HMA mixing process. Sometimes waste materials, such as asphalt roofing shingles, crushed glass, or rubber from old tires, are added to asphalt concrete as is the case with rubberized asphalt, but there is a concern that the hybrid material may not be recyclable.