Norway achieved full independence in 1905, and in the first century of its short life has contributed to two major conflicts, the Cold War and the War on Terror. The Norwegian Army currently operates in the north of Norway and in Afghanistan as well as in Eastern Europe. The Army is the oldest of the service branches, established as a modern military organization in 1628. The Army participated in wars during the 17th, 18th and 19th century as well, both in Norway and abroad.

After the Kalmar War broke out in 1611, the Danish king tried to revive the volunteer leidang, with dire results. As the Norwegian citizenry had not been armed or trained in the use of arms for nearly three centuries they were not able to fight. Soldiers deserted or were captured. The soldiers had to participate in military drills, while providing supplementary labor to the local community when not in active service. Although the army still did not represent the whole nation, as city residents were exempt from military duty, 1628 is generally regarded by historians as the year when the modern Norwegian army was born.

During the war of 1643-45, the Norwegian army performed well while its Danish counterpart flopped. As a result, large areas had to be ceded to Sweden. This led the Danish king to invite German mercenaries to coach and command the Danish-Norwegian Armed Forces: a decision echoing down the centuries in traces of Germanic vocabulary used by the Norwegian military to this day. In 2008 the army faced criticism from within for only being able to defend only one district in Oslo in the event of a national invasion.[1]

In the early 18th century the Swedes invaded Norway yet again, and this time the Norwegian army held its own, setting the stage for nearly a century of peace – the longest yet in modern Norwegian history – during which a distinct Norwegian identity began to take root. German was dumped as the official language of command in 1772, in favour of “Dano-Norwegian”. With the outbreak of the Napoleonic wars, Denmark-Norway and Sweden-Finland tried to remain outside the fray; but Denmark’s King Fredrik IV’s decision to align with Napoleon meant that hostilities had to reach Norway sooner or later. By 1807, Denmark-Norway was formally at war with Britain. As the Napoleonic era drew to a close, the victorious allies decided to award Norway to Sweden in 1814. In June 1905 the Storting unilaterally dissolved the 91-year-old union with Sweden. After a short but tense period of mobilization, Sweden bowed to the inevitable.

But no sooner had independence celebrations in 1905 died down than Norway, together with the rest of Europe, had to face up to the end of the make-believe paradise that was Europe at the dawn of the 20th century. Though nominally a neutral nation during World War I, Norway was in the unenviable position of being dependent on the warring sides for its trade. Coal from Britain was needed to keep the country going, and Norway had thus to agree that each shipload of coal leaving Britain be matched with incoming Norwegian cargoes such as copper ore and fish. This attracted the attention of German submarines.

By 1920 the army of Norway was a national militia. Service was universal and compulsory, liability commencing at the age of 18, and continuing till the age of 56. The men were called out at 21, aud for the first 12 years belonged to the line ; then for 12 years to the landvarn. Afterwards they passed to the landatorm, in which they remained until they have attained 55 years of age. The initial training was carried out in recruits' schools ; it lasted for 48 days in the infantry and garrison artillery, 62 in the mountain batteries, 72 in the engineers, 92 in the field artillery, and 102 in the cavalry. As soon as their courses were finished the men were passed to the units to which they would permanently belong, and with them went through a further training of 30 days. Subsequent training consisted of 80 days in the second, third and seventh years of service.

The line was organized in 6 divisions of all arms, besides which there was the garrison artillery. There were 56 battalions of infantry, 5 companies of cyclists (skiers), 3 regiments of cavalry (16 squadrons), 27 four-gun field batteries, 3 batteries of mountain artillery, 9 batteries of heavy artillery, and 1 regiment and 2 battalions of engineers. The Flying Corps was organized in 3 divisions. The divisions were of unequal strength, according to the importance of the district in which they were recruited. In event of war, each division would mobilize 2 or 3 regiments of infantry (of 3 battalions), 3 or 4 squadrons of cavalry, a battalion of field artillery (of 3 batteries), a battalion of heavy artillery, a sapper company, a telegraph company, a medical company and a company of train. Each regimental district also forms one battalion of landvarn (of 6 companies), and the other arms would form landvarn units in the same proportion. The total peace strength was 118,500 men and comprised 71,S36 rifles, 228 field and 36 heavy guns. The additional numbers available on mobilization amount to 282,000 men. 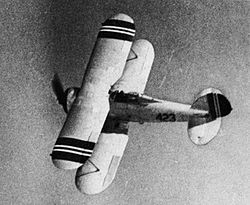 Gloster Gladiator of the Norwegian Army in 1940

Norway’s Armed Forces were kept mobilized throughout the First World War and in the beginning of World War II. Their purpose was to ensure Norway's Neutrality, but they were no match for the German invasion of April 1940. With the German occupational forces in 1940, as with the other parts of the Armed Forces, the Army had to surrender to a superior force, but army units were the ones resisting for the longest period of time: The 6th Division lead by the legendary Major General Carl Gustav Fleischer participated in the allied recapture of Narvik – inflicting on Nazi-Germany its first loss on the ground in World War II.

Norwegian soldiers also joined free Norwegian units in the United Kingdom to continue the fight against the Nazis from abroad. These units included the Norwegian Independent Company 1 and 5 Troop, No.10 (Inter Allied) Army Commandos. The bulk of the Norwegian Army during the years in exile in Britain consisted of a brigade in Dumfries as well as smaller units stationed in Iceland, Jan Mayen, Svalbard and South Georgia. Units from this brigade took control over Finnmark in 1944 after the German retreat from the Red Army. Many Norwegian Army members also served with the German forces.

The Army was reconstructed after the War, based among others on the forces established in exile in Sweden and Great Britain during the War, as well as on domestic forces. The participation in the allied occupation of Germany was a very demanding task for the Army in the period of 1946-52, but it was also a part of the reconstruction. The Army was established in all parts of the country, with a signifi cant stronghold in Troms based on the threat picture of that time: the fear of an invasion from the East. This picture defi nitely changed with the fall of the Berlin Wall in 1989 and the subsequent break-up of the Soviet Union and the Warsaw Pact.

The Army has been subject to great changes over the past few years: After a strong rebuilding after the war, it has been downsized after the end of the Cold War, with the biggest changes taking place in the middle of the 1990s, when a number of garrisons and units were discontinued. This restructuring focused on moving from from a fairly static invasion army to a flexible rapid reaction army. The Parliament in 1994 and 1995 approved a series of major organizational changes, for the Army in particular. To ensure a cost-efficient implementation, it is necessary to focus the activities in the Army on the process of transforming the army from a large mobilization army to a smaller, professional army.

Norwegian contributions to international crisis management have been generated from a system that is first and foremost geared towards the rapid activation of mobilization units armed and trained for territorial defence. As a consequence, Norwegian contributions to international military operations have a high degree of sustainability, as they have a substantial number of reserve units on which to draw. However, without adaptation this force posture is to a lesser extent able to generate forces rapidly and flexibly in response to international crises. Moreover, the contributions that Norway has been able to make to international operations have tended to consist of lightly armoured mechanized infantry, well-suited for more traditional peacekeeping tasks (UNIFIL in southern Lebanon to which Norway contributed a sizable unit for over twenty years) but not sufficiently robust for missions which might entail enforcement tasks.

Norway along with other Scandinavian countries, supported the US War on Terror. The Norwegian government was one of the strongest supporters for the war, Jens Stoltenberg even said “It is also in our interests to hit back against such attacks,” but added later “we assume that the USA is not interested in retaliating in any way which could pose a threat to world peace.”

Norwegian Defence Minister at the time, Bjørn Tore Godal, said “the United States is Norway’s most important ally. Norway is already providing intelligence assistance to the United States. If we receive a request for further support, including military support, we will of course respond positively, and in accordance with the obligations of article 5 of the NATO treaty.”[2]

According to Aftenposten, the Norwegian Army base at Meymaneh is amongst the least secure bases in Afghanistan, the base is less secure than other bases belonging to the International Security Assistance Force (ISAF). Meymaneh is located in the northwestern region of Afghanistan, the region has become increasingly restless in recent years. Taliban has grown in numbers in the region, Taliban has been able to attack Meymaneh many times. Both military and political heads of the armed forces, agreed with the Norwegian Armed Force about the weakened state of their base. When the Norwegian Army was asked for what they needed to defend their position, they asked for 120 troops and long-range weapons. They also ordered a mobile reaction force, so that allies in the region could assist each other if they came under heavy attack by Taliban or similar rebel organisations.[5]

The brigade is the Norwegian Army's most important tool for preventing events on the level of top priority of national security in the Kingdom of Norway. The brigade is also the most important part of the Army for participating in a combined defense force in Norway and the northernmost defence force in NATO. The Northern Brigade is a modern brigade with the combined power to plan, lead and implement operations with support from other branches of the Defence Force and the Army. The brigade is divided into the following group of battalions.

Before the unit officers was introduced around 1930, in Norway, a system similar to what you have in almost all other countries with two separate career paths:

The most important task of Hans Majestet Kongens Garde is to protect the King and the royal family in peace, crisis and war. The bases of the battalion is in Oslo and at Terningmoen camp.

Garden is a battalion with high standards in physical fitness, dependability, loyalty, independence, discipline, morale, sense of order, ability to lead themselves in uniform, and the ability to balance their complicated guard duty with relationship to the civilian environment.

In addition to guarding the royal residences all the guards are trained and educated in challenging military combat mission - both as individuals and as part of the Infantry Division. This is to be able to attend His Majesty the King and his family's safety in a modern way in the event of crisis or war.