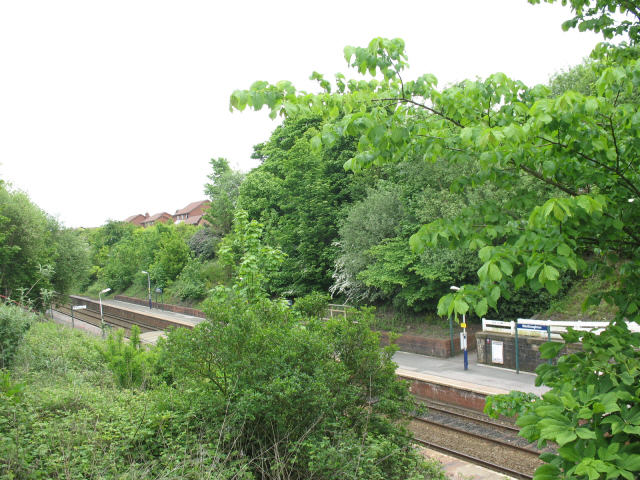 Westhoughton railway station serves the town of , in the , , north-western . The station is 25 km (15½ miles) north west of .

The station is located in Church Street, about ten minutes' walk from the town centre. The town of Westhoughton is also served by which is around 15 minutes on foot from Westhoughton centre and is situated on the (via Atherton).

Unlike the town's other station at Daisy Hill, Westhoughton station has been unstaffed since 1974 (when all the track-side and road-side buildings were demolished). This is despite the fact that both stations now enjoy almost identical levels of patronage (see usage figures right). Westhoughton station's passenger usage seems set to grow further as there has been considerable housing development on "brown-field" land (the site of a former mine) within a few hundred yards of the station. Indeed the town overall continues to grow as a commuter "suburb." [http://www.swanonline.co.uk/survey_res.html] . When recent (June 2008) usage figures were released ( [http://www.rail-reg.gov.uk/server/show/nav.1529] ) they revealed an increased year-on-year increase of some 10%.

In the late 1980's Westhoughton very nearly had a new third station at "Dobb Brow" and planning went so far as the proposed station to appear on railway maps as "may open during the course of this timetable." At the last moment, however, plans were shelved. In 2000 these plans were revived but as yet without fruition [http://archive.thisislancashire.co.uk/2000/10/28/708192.html] .

As yet (2008) unspecified development is planned for the station [http://www.gmfuturetransport.co.uk/MyDistrict/bolton/train.aspx] .

As noted above the station is unstaffed. There are no toilet nor refreshment facilities nor pay phone nor "remote travel information."

There is a public house "The Commercial" right next door to the station and bus stops for services to many parts of the town (and the town's other station: "Daisy Hill").

There is a free car-park.

For many years Westhoughton had an hourly service (see BR Timetable 1973, table 95). Since the 1980's services have dramatically improved:

Monday to Saturdays daytimes there are two trains per hour westbound to Wigan Wallgate (with one onwards to Southport) and an hourly service to both Manchester Airport via Piccadilly and to . There a few trains a day to Wigan North Western and (after reversal) on to Liverpool Lime Street. At other times Liverpool is reached by changing at Kirkby or crossing the road from Wigan Wallgate to Wigan North Western station.

On evenings and Sundays there is an hourly service to Southport and to Manchester Piccadilly (and beyond). For many years there was no Sunday service.

Trains from Westhoughton to Bolton pass by, but cannot stop at, Lostock (Junction) station (there being no platforms on the Wigan line). Passengers wishing to travel from Westhoughton to Preston and Blackpool must either change at Wigan Wallgate (usually crossing the road to Wigan North Western - 100 yards walk) or via Bolton. Connections to London (Euston) can be made at Wigan (recommended as there is always only one change) or Manchester Piccadilly (by changing sometimes additionally at Salford Crescent).