Oliver Evans (13 September 1755 – 15 April 1819) was an American inventor. Evans was born in Newport, Delaware to a family of Welsh settlers. At the age of 14 he was apprenticed to a wheelwright.

Evans' first invention was in 1777, when he designed a machine for making card teeth for carding wool. He went into business with his brothers and produced a number of improvements in the flour milling industry.[1]

Evans devoted a great deal of his time to patents, patent extensions, and enforcement of his patents.[2] 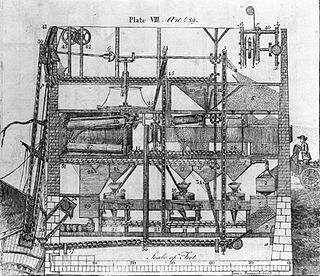 In 1792 he moved to Philadelphia, Pennsylvania.

He produced an improved high-pressure steam engine in 1801.[3] For some years he contemplated the idea of applying steam power to wagons. He was granted a patent for a steam-carriage design in 1789, but did not produce a working example of such a machine until over a decade later (see below on his Oruktor Amphibolos). Part of his difficulties was a failure to get financial backing. After lack of support in his native land, in 1794 he sent copies of some his designs to Great Britain in an attempt to interest investors there.

Evans designed a refrigeration machine which ran on vapor in 1805, so he is often called[by whom?] the inventor of the refrigerator, although he never built one. (His design was modified by Jacob Perkins, who obtained the first patent for a refrigerating machine in 1834.)

As noted by Roe, Evans is best known for the system of conveyors and other equipment he developed for his automatic flour mill:

Evans most important invention was an automated flour mill which operated continuously through the use of bulk material handling devices including bucket elevators, conveyor belts, and Archimedean screws. Evans described this invention in The Young Mill-wright and Millers' Guide. He patented this invention in a few states and, when the US patent system was established, in the federal patent system (Third U.S. Patent).[3]

" These five machines…perform every necessary movement of the grain, and meal, from one part of the mill to another, and from one machine to another, through all the various operations, from the time the grain is emptied from the wagoner's bag….until completely manufactured into flour…without the aid of manual labor, excepting to set the different machines in motion."[5]

David Hounshell (1984) acknowledged the influence of Evans'es automatic flour mill in the sequence of innovations leading up to the assembly line.[6] 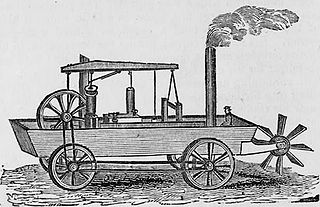 The Oruktor Amphibolos, as illustrated in "The Boston mechanic and journal of the useful arts and sciences" (July, 1834)

One device for which Oliver Evans is known today is his Oruktor Amphibolos, or "Amphibious Digger", built on commission from the Philadelphia Board of Health. The Board was concerned with the problem of dredging and cleaning the city's dockyards, and in 1805 Evans convinced them to contract with him for a steam-powered dredge.

No technical drawings of the device survive, and the only evidence for its design come from Oliver Evans' own descriptions, which are contradictory, and most likely exaggerated. He describes the vehicle as a 30-foot (9.1 m) long 15 ton scow, powered by a 5 horse-power steam engine. For a demonstration of his long-held beliefs in the possibility of land steam demonstration, Evans mounted the hull on 4 wheels and may have connected the engine to them, to drive it through Philadelphia streets on the way to the river. The small size of the engine, the large size of the vehicle, and the lack of any contemporary evidence other than Evans' own writings for it make this seem unlikely. Evans claimed that his dredge was the first self-powered amphibious vehicle, as well as the first self-powered land vehicle in the United States (steam powered road vehicles had already been used earlier in France and Great Britain). The Oruktor Amphibolos was never a success as a dredge, and after a few years of sitting at the dock was sold for parts.

Subsequently, Evans wrote about the Oruktor in many publications, and each time the achievements became more impressive. He also 'corrected' the date of the machine from 1805 to 1804, possibly in a dispute about steamboat patents, and this inaccuracy has since been perpetuated by several commentators.[7]

Oliver Evans wrote up proposals to mechanize road vehicles, but failed to get backing from investors, who saw the scheme as impractical. In 1812 he published a visionary description of the nation connected by a network of railroad lines with transportation by swift steam locomotives. It should be remembered that at the time the locomotive was little more than a crude curiosity, and no attempts to use it for long distance transport had yet been made; see: History of rail transport.

In 1811, he founded the Pittsburgh Steam Engine Company, which in addition to engines made other heavy machinery and castings in Pittsburgh, Pennsylvania. The location of the factory in the Mississippi watershed was important in the development of high pressure steam engines for the use in riverboats.

In 1819, while in New York City, Oliver Evans was informed that his workshop in Philadelphia had burned to the ground. Evans suffered from a stroke at the news, and died soon after. He is buried in Trinity Cemetery, Broadway at 154th Street, New York City.[8] 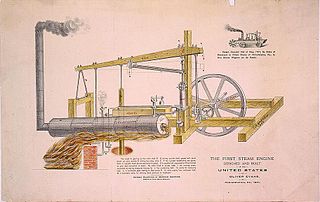