The Toyota Vios is a 4-door subcompact sedan developed for the and markets.

Introduced in 2003, the Vios serves as a replacement of the which filled the Asian subcompact market for a 1.5 litre , below the and , both of which are also marketed in the region. The Vios is marketed alongside the in most countries in South East Asia, which offered another option for a hatchback, when it officially entered the region's market in 2005.

The first generation Vios was adapted from the with modified body panels, which created a significantly different appearance, although portions of the car feature design cues from the E120 CorollaFact|date=February 2008. In late 2005, the Vios received minor cosmetic changes for the 2006 model year. The front bumper, grille, headlights, and tail lights were freshened; also new were the wheels and interior trim.

In other uses, the first generation Vios is adopted as a racing vehicle in Touring Car Championships in and . The car is also in use as s in Indonesia but features lesser equipment and is specially rebadged as the Toyota Limo. This is not to be confused with certain taxis with the same name in , which uses Toyota Corollas.

A "" variant of the first generation Vios was made available in Thailand only, boasting a turbocharged 1.5 liter engine with an air-to-air intercooler that produces 143 PS with light boost. Standard on the Vios Turbo are a functional scoop on its hood, wrap-around body kits, stiffer springs, firmer shock-absorbers and 16" alloys. The transmission ratio & differential ratio were based on that of a Toyota MR-S.


name=Second generation
production=2007-present
body_style= 4-door sedan
engine= 1.5 liter (1 NZ-FE)
similar= / Fit Aria
layout=
related= The new Vios is essentially a re-badged sedan, which launched in November 2005. The model code for cars with 1.5 liter 1NZ-FE engines is NCP93. The engine is only available where the Vios is marketed, including the , , , , and . As was the first generation Vios, the second generation Vios is assembled at Thailand's Toyota Gateway Plant and also at the Philippines Santa Rosa, Laguna Plant. In the , and it is marketed as the Yaris Sedan, replacing the Echo sedan, with production sourced from Japan.

The new Vios was designed for more comfort than handling. Interior is much upgraded with more convenience features, and flat rear floor.

In , the Vios is sold in three grades, namely J, E and G, with J being the grade with lesser accessories and G with the most accessories.

The J Grade is the most basic grade available in Singapore which offers only the most basic equipments compared to E and G grade. The J Grade Vios comes standard with a CD/MP3/WMA player with 4 speakers, keyless entry, ABS/EBD/BA (on front disc brakes only), driver-only SRS airbag, sports alloy rims and interior fabric with dark grey colour seats. The J Grade Vios is priced at S$53,888 (automatic) as of 22 November, 2007.

The E Grade is the medium-class grade which offers slightly more and lesser equipments compared to J and G grade respectively. As Borneo Motors (Singapore) no longer sells the manual variant of the J Grade, the E grade Vios is currently the only model that offers manual transmission in the Toyota saloon line in Singapore. In comparison to the J Grade, the E Grade includes an additional SRS airbag for the front passenger and side moulding. The J Grade Vios is priced at S$54,888 for manual or S$55,888 for automatic as of 22 November, 2007.

The G Grade is the most luxurious grade available in Singapore which offers the most equipments compared to J and E grade. In comparison to the J Grade, the G Grade features a 6 speakers CD/MP3 player, driver and front passenger SRS airbags, fog lamps, side moulding and 60:40 fold-down rear seats. The G Grade Vios is priced at S$60,988 (automatic) as of 22 November, 2007.

All three grades features 3rd party sport kits, and alloy rim which is customised by the Toyota dealership in Singapore(Borneo Motors), which was not included in the original order from factory.

, which currently manufactures the Vios, is offered a total of three grades (J, E and G), as well as two limited edition grades (G-Limited and S-Limited). Thailand is currently the only country that offers all existing grades of the new Vios, whilst export markets are only given a fraction of the Thai range in varying combinations. In addition, certain the range of equipment in Thai Vios' differ from those in export versions.

The J Grade is the most basic grade of the second generation Vios, offering the least sophisticated set of equipments, such as an unchangeable CD/MP3/WMA player with 4 speakers, an optional keyless entry with TVSS, ABS/EBD/BA, 15-inch steel wheels with hubcaps, rear fog lamps, and interior fabric with dark grey colour seat.

The E Grade is a medium-class variant up a notch from the J Grade but is positioned lower from the G Grade. In comparison to the J Grade, the E Grade features a keyless entry with TDS, an option between dark grey or ivory-coloured seat fabrics, optional driver & front passenger SRS airbags, frontal and rear fog lamps, 15-inch sports alloy rims and side moulding.

The G Grade is the most well equipped variant among the three base grades, featuring the most equipments. In comparison to the J Grade, the variant features an unchangeable 6 speakers CD/MP3/WMA player, leather seating in either dark grey or ivory colours, driver & front passenger SRS airbags, a multi functional steering wheel, 15-inch sports alloy rims, frontal and rear fog lamps, side moulding, a blue "Optitron" panel with a multi information display, and 60:40 fold-down rear seats.

A G-Limited Grade, which offers the same features as the G Grade, is additionally provided with several enhancements on the interior, including a keyless and smart entry with TDS, a Start/Stop push button, and an immobilizer key.

An additional grade solely available as a limited edition is the S-Limited Grade, which features a "Wrap-Around Aeropart" bodykit, an orange "Optitron" panel with a multi information display, high intensity discharge headlamps with automatic height adjustment, and all-wheel disc brakes.

Audio systems in all second generation Vios grades are equipped with ASL (Auto-Speed Sound Levelizer), which detects and compensates for changes in external noise levels, adjusting volume and tone controls automatically based on the car's speed. 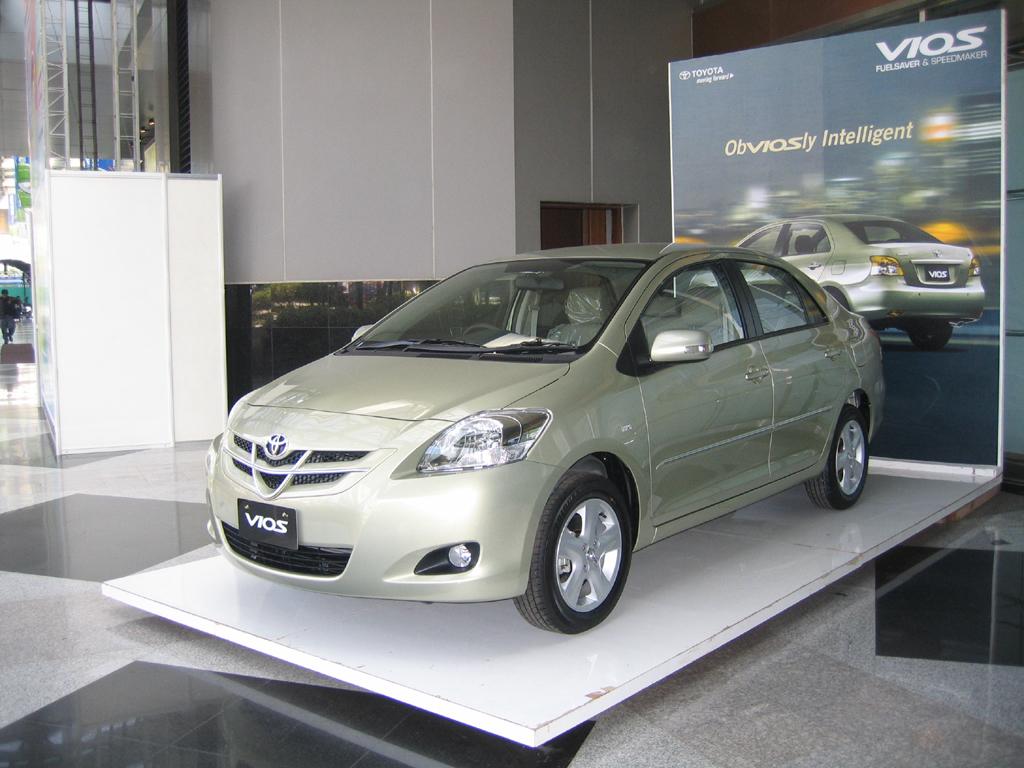 thumb|250px|right|A_2007_Toyota_Vios_G_NCP93_in_.] The new Vios NCP93 was officially launched to the n market in April . The Indonesian Vios can be distinguished from other countries' models with its "V-shape" grille ornament which is the optional for the Yaris Hatchback. Like the outgoing NCP42, the new Vios is offered in E (manual only), and G (manual and automatic) trim levels.

All model have ABS and analog instrument panel. The E has rear drum brake, and the G comes with all discs. The higher grade G model has standard front and rear fog lamps, audio control on the steering wheel, and back sonar. Start/Stop push button is only on the G with automatic transmission.

The second generation Vios was first unveiled in on , in , two weeks ahead of its official launch on , .

The car, like its predecessors, is powered by a 1NZ-FE 1.5 litre four-pot engine with but includes redesigns on the air intake and exhaust system to improve low to mid-range . While the s of Vios is unchanged, its transmission is now a Super ECT four-speed automatic and improved programming for the . Electric was also included on the new Vios.

The E grade is the entry-level model, branded as a cost-effective version of the Vios, and is the cheapest and most stripped-down Vios among the three grades, priced at around an estimated RM 78,900. The car includes several cut-backs compared to the G and S grades, including:

The new Vios line saw the inclusion of a new S grade Vios. The S grade features cosmetic enhancements rather than a performance-based ones, sporting a set of "aero parts", a minor encompassing a front bumper spoiler, side skirts and a bootlid spoiler. The interior receives a dark grey/black trim treatment, and includes an "Optitron" meter with a multi-information display, as opposed to the E and G grades' conventional backlit display. The S variant is estimated to be the most expensive Vios among the three, at around RM 88,600.

The G grade is considered to be a mid-priced model between the E and S grades, retailing at an estimated RM 85,300.

Toyota added a fourth grade called the J grade, which is the cheapest and most bare bone grade of the Toyota Vios in Malaysia. Unlike the other grades which are only available with an automatic transmission, the J grade has the option for a manual transmission. The manual J grade Vios is priced at just under RM70,000 (RM69,825.00 or RM73,525.00 for manual and automatic respectively). The J grade Vios does not come with any airbags. [ [http://www.toyota.com.my Toyota Malaysia Official Website] ]

All model grades were reported to include ABS, EBD and , as are passive safety features such as whiplash injury lessening seats, a collapsible steering wheel column and an impact sensing fuel cut-off.

A major difference of the Vios in is that the larger capacity models are powered by the new 1.6L *1ZR-FE engine with Dual .

Unlike other markets, Mainland China uses version naming as follows: