Middle Dutch is a collective name for a number of closely related West Germanic dialects (whose ancestor was Old Dutch) which were spoken and written between 1150 and 1500. There was at that time as yet no overarching standard language, but they were all mutually intelligible.

In historic literature Diets and Middle Dutch (Middelnederlands) are used interchangeably to describe this whole of dialects from which later standard Dutch would be derived. Although already at the beginning several Middle-Dutch variations were present, the similarities between the different regional languages were much stronger than their differences, especially for written languages and various literary works of that time today are often very readable for modern Dutch speakers, Dutch being a rather conservative language. By many non-linguists Middle Dutch is often referred to as Diets. 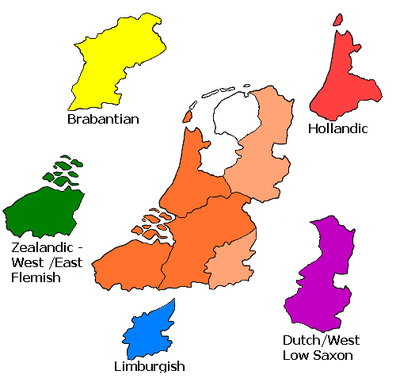 The five Middle Dutch dialectal groups in their present-day distribution

Within Middle Dutch, five large groups can be distinguished, all believed to be mutually intelligible:[citation needed]

Limburgish and Low Saxon gradated into Middle High German and Middle Low German, respectively. These two areas border directly the German language area in the narrow sense (i.e., today's Germany). The dialect continuum in this border region was even more fluid in the past than it is today.

Hollandic experienced a slow but steady transition from an Ingvaeonic variant to true Low Franconian, through the influence of the more prestigious Brabantic and Utrecht dialects. Flemish and Brabantic started to diverge in the late Middle Ages.

The consonants of Middle Dutch differed little from those of Old Dutch. The most prominent change is the loss of dental fricatives. The sound [z] was also phonemicised during this period, judging from loanwords that retain [s] to this day.

If two phonemes appear in the same box, the first of each pair is voiceless, the second is voiced. Phonemes written in parentheses represent allophones and are not independent phonemes. For descriptions of the sounds and definitions of the terms, follow the links on the headings.

Most notable in the Middle Dutch vowel system, when compared to Old Dutch, is the appearance of phomenic rounded front vowels, and the merger of all unstressed short vowels.

Changes during the Middle Dutch period

Contemporary Dutch has a standard form. Middle Dutch had no such thing as it was not until the middle of the 16th century that efforts were made to standardize the language. As a result, the Dutch speakers of the Middle Ages had a very free way of writing. In fact in some old books, the same word appears in different spellings on the same page. Then there was the problem with the letters themselves. The Dutch language used the Latin alphabet which was perfect for writing Latin, but wasn't for the Dutch language. Dutch for instance has far more vowels and consonant sounds which meant people literally ran out of letters. Several adjustments were therefore needed and it took quite a while before the spelling became more standardised. Then there was the matter of personal taste, and many writers thought it was more aesthetic to follow French or Latin practice, leading to sometimes rather unusual spellings.

In general, every writer wrote in his own dialect, and often in a very phonetical way and different pronunciation led to different ways of writing. The modern Dutch word maagd ("maiden") for example was sometimes written as maghet or maegt, but also meget, magt, maget, magd, and mecht. Some spellings such as magd reflect an early tendency to write the underlying phonemic value. However, by and large, spelling was phonetic, which is logical as people in those days read texts out loud.

The letter z in was not used regularly at all in Middle Dutch, with s being used to represent both /z/ and /s/. As a general rule, k and gh were written before e or i, as in kiesen (kiezen, "to choose"), ghedaen (gedaan, "done"). They were written c or g elsewhere, as in ic (ik, "I"), copen (kopen, "to buy") and coninc (koning, "king"). The combination /kw/ was normally written qu, such as in quam (kwam, "came").

And finally, there was no difference between short and long vowels, so that people had to find a solution for that as well. Sometimes they just duplicated the vowels, as in oo, ee, ij (originally a double i). But sometimes an i or e was added, as in ui for /yː/, and oi or oe for /oː/. The vowel /øː/ was variably written eu, ue, o or oe. Modern Dutch preserves the spellings eu, ui and ij, although the latter two are now diphthongs. Following a sound change in late Old Dutch, in which short vowels were naturally lengthened in open syllables, the practice of writing long vowels single in open syllables was established, although it was applied inconsistently through most of the Middle Dutch period.

Middle Dutch pronouns differ little from their modern counterparts. The main differences are in the second person with the development of a T-V distinction. The second-person plural pronoun ghi slowly gained use as a respectful second-person singular form. The original singular pronoun du gradually fell out of use during the Middle Dutch period. After the Middle Dutch period, a new second person plural pronoun was created by contracting gij/jij and lui ('people') forming gullie/jullie (which this literally means 'you people').

Middle Dutch had a case system. Since the Middle Ages Dutch has gradually lost an active case system, first in the spoken language, much later in the written language, so it is now mostly limited to fixed expressions. The spelling reform of 1947 removed most remaining parts of the case system, among them the accusative. However, Middle Dutch and Modern Dutch were very similar, apart from the case system; one of the most prominent differences of contemporary Dutch is that it uses great numbers of prepositions, far more than Middle Dutch, to compensate with the loss of the case system. It has to be noted, though, that even in Middle Dutch the use of prepositions, especially van, was very common. Furthermore, Middle Dutch would often use an accusative form instead of a nominative (e.g. Doe quam den edelen prince daer ("Then the noble prince arrived"), Dezen man sel op zijn hooft hebben een stalen helme ("This man will have a steel helmet on his head")).[1] This is still common in some southern dialects and in the Belgian Tussentaal. Similarly, the -n was sometimes omitted where it would be expected: in levende live (Modern Dutch in levenden lijve), des levende Gods instead of levenden ("of the living God"), van den lopende water instead of lopenden ("of the running water").[2]

Due to the weakening of unstressed syllables, the many different Old Dutch classes of nominal declension merged. The result was a general distinction between strong (original vocalic stem) and weak (n-stem) nouns. Eventually even these started to become confused, with the strong and weak endings slowly beginning to merge into a single declension class by the beginning of the modern Dutch period.

Middle Dutch mostly retained the Old Dutch verb system. Like all Germanic languages, it distinguished strong, weak and preterite-present verbs as the three main inflectional classes. However, due to the weakening of unstressed syllables, the two classes of weak verbs that still existed in Old Dutch merged into one.

The seven classes of strong verb common to the Germanic languages were retained, but over time the older distinction between the singular and plural past was lost, with the singular forms generally adapting the stem of the plural (except in classes 4 and 5, where the distinction was by length rather than vowel timbre). Some weak verbs which had a vowel change in the past because of Rückumlaut eventually became strong, such as senden (with original past tense sande, but later also sand or sond). By analogy some strong verbs were also turned into weak verbs, sometimes only by adding the weak past ending -de. This might have occurred only for poetic reasons, however, such as in Karel ende Elegast where the form begonde (regularly began or begon) is found near the beginning of the text.

The weakening also affected the distinction between the indicative and subjunctive moods, which had largely been determined by the vowel of the inflectional suffix in Old Dutch. In Middle Dutch, with all unstressed vowels merging into one, the subjunctive became distinguished from the indicative only in the singular, but was identical to it in the plural, and also in the past tense of weak verbs. This led to a gradual decline in the use of the subjunctive, and it has been all but lost entirely in modern Dutch.