Tamil Sangams
For other uses of Sangam see Sangam (disambiguation).

The Tamil Sangams were assemblies of Tamil scholars and poets that, according to traditional Tamil accounts, occurred in the remote past. Three assemblies are described. The legend has it that the first two of which were held in cities since "taken by the sea", and the third of which was held during the 5th century BC in the present-day city of Madurai.

The Sangam period extended from roughly 300 BC to 300 AD, when the earliest extant works of Tamil literature were created (also known as Sangam literature).[1][2] However, the name Sangam and the associated legends probably derive from a much later period.[3]

Whilst the accounts of first two Sangams are generally rejected as ahistorical, some modern scholars, such as Kamil Zvelebil,[4] find a kernel of truth in them, suggesting that they may be based on one or more actual historical assemblies. Others reject the entire notion as a infactual.[5] Nevertheless, legends of the Sangams played a significant role in inspiring political, social, and literary movements in Tamil Nadu in the early 20th century.

Early literature from the pre-Pallava dynasty period does not contain any mention of the Sangam academies, although some early poems imply a connection between the city of Madurai, which later legends associate with the third Sangam, and Tamil literature and the cultivation of the language.[6] The earliest express references to the academies are found in the songs of Appar and Sampandar, Shaivite poets who lived in the 7th century.[7] The first full account of the legend is found in a commentary to the Iraiyanar Akapporul by Nakkīrar (c. seventh/eighth century CE).[8] Nakkīrar describes three "Sangams" (caṅkam) spanning thousands of years. The first Sangam (mutaṟcaṅkam)mudharchangam is described as having been held at "the Madurai which was submerged by the sea", lasted a total of 4400 years, and had 549 members, which supposedly included some gods of the Hindu pantheon such as Siva, Kubera and Murugan. A total of 4449 poets are described as having composed songs for this Sangam. There were 89 Pandiya kings starting from Kaysina valudi to Kadungon were decedents and rulers of that period.[9] 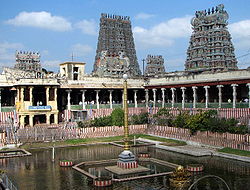 There are a number of other isolated references to the legend of academies at Madurai scattered through Shaivite and Vaishnavite devotional literature throughout later literature.[13] The next substantive references to the legend of the academies, however, appear in two significantly later works, namely, the Thiruvilaiyadal Puranam of Perumpaṟṟapuliyūr Nambi, and the better-known work of the same title by Paranjothi Munivar.[14] These works describe a legend that deals mostly with the third Sangam at Madurai, and is so substantially different from that set out in Nakkirar's commentary that some authors such as Zvelebil speculate that it may be based on a different, and somewhat independent, tradition.[15] In Nambi's account, the 49 members of the third Sangam led by Kapilar, Paraṇar and Nakkīrar were great devotees of Shiva, numbered amongst the 63 nayanars.[16] Nakkirar himself is said to have later headed the Sangam, and to have debated Shiva. The Sangam is described as having been held on the banks of the Pond of Golden Lotuses in the Meenakshi-Sundaresvarar Temple in Madurai.[17]

In contemporary versions of the legend, the cities where the first two Sangams were held are said to have been located on Kumari Kandam, a fabled lost continent, that lay to the South of mainland India, and which was described as the cradle of Tamil culture. Kumari Kandam supposedly lay south of present-day Kanyakumari District and, according to these legends, was seized by the sea in a series of catastrophic floods.[18]

According to Kamil Zvelebil, the assemblies may have been founded and patronised by the Pandian kings and functioning in three different capitals consecutively till the last sangam was set up in Madurai. Zvelebil argues that the appearance of the tradition in literary and epigraphical sources means that it cannot be dismissed as pure fiction.[6] He suggests that the Sangam legends are based on a historical "body of scholiasts and grammarians 'sits' as a norm-giving, critical college of literary experts, and shifts its seat according to the geopolitical conditions of the Pantiyan kingdom."[21]

In 470 CE, a Dravida Sangha was established in Madurai by a Jain named Vajranandi.[22] During that time the Tamil region was ruled by the Kalabhras dynasty. The Kalabhra rulers were followers of either Buddhism or Jainism. The Dravida Sangha took much interest in the Tamil language and literature.[22] Jain cosmology and mythology are mentioned in early Sangam works,[23] and Jain surnames are found amongst the early poets. Later legends about Tamil Sangams may have been based on the Jaina assembly.[24]

The earliest extant works of Tamil literature date back to the period between 300 BCE and 200 CE and deal with love, war, governance, trade and bereavement.[25] The literature of this period has been referred to as The Sangam literature and the period in which these works were composed is referred to as the Sangam period, alluding to the legends.[1][2] Although the term Sangam literature is applied to the corpus of the earliest known Tamil literature, the name Sangam and the legend were probably from a much later period.[3]

An accurate chronological assessment of literary works has been rendered difficult due to lack of concrete scientific evidence to support conflicting claims. Undue reliance on the Sangam legends has thus culminated in controversial opinions or interpretations among scholars, confusion in the dates, names of authors, and doubts of even their existence in some cases. The earliest archaeological evidence connecting Madurai and the Sangams is the 10th century Cinnamanur inscription of the Pandyas.[26]