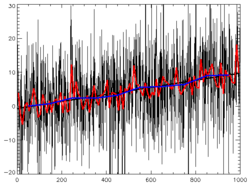 In statistics, signal processing, econometrics and mathematical finance, a time series is a sequence of data points, measured typically at successive times spaced at uniform time intervals. Examples of time series are the daily closing value of the Dow Jones index or the annual flow volume of the Nile River at Aswan. Time series analysis comprises methods for analyzing time series data in order to extract meaningful statistics and other characteristics of the data. Time series forecasting is the use of a model to predict future values based on previously observed values. Time series are very frequently plotted via line charts.

Time series data have a natural temporal ordering. This makes time series analysis distinct from other common data analysis problems, in which there is no natural ordering of the observations (e.g. explaining people's wages by reference to their education level, where the individuals' data could be entered in any order). Time series analysis is also distinct from spatial data analysis where the observations typically relate to geographical locations (e.g. accounting for house prices by the location as well as the intrinsic characteristics of the houses). A time series model will generally reflect the fact that observations close together in time will be more closely related than observations further apart. In addition, time series models will often make use of the natural one-way ordering of time so that values for a given period will be expressed as deriving in some way from past values, rather than from future values (see time reversibility.)

There are several types of data analysis available for time series which are appropriate for different purposes.

Models for time series data can have many forms and represent different stochastic processes. When modeling variations in the level of a process, three broad classes of practical importance are the autoregressive (AR) models, the integrated (I) models, and the moving average (MA) models. These three classes depend linearly[3] on previous data points. Combinations of these ideas produce autoregressive moving average (ARMA) and autoregressive integrated moving average (ARIMA) models. The autoregressive fractionally integrated moving average (ARFIMA) model generalizes the former three. Extensions of these classes to deal with vector-valued data are available under the heading of multivariate time-series models and sometimes the preceding acronyms are extended by including an initial "V" for "vector". An additional set of extensions of these models is available for use where the observed time-series is driven by some "forcing" time-series (which may not have a causal effect on the observed series): the distinction from the multivariate case is that the forcing series may be deterministic or under the experimenter's control. For these models, the acronyms are extended with a final "X" for "exogenous".

Non-linear dependence of the level of a series on previous data points is of interest, partly because of the possibility of producing a chaotic time series. However, more importantly, empirical investigations can indicate the advantage of using predictions derived from non-linear models, over those from linear models, as for example in nonlinear autoregressive exogenous models.

Among other types of non-linear time series models, there are models to represent the changes of variance along time (heteroskedasticity). These models represent autoregressive conditional heteroskedasticity (ARCH) and the collection comprises a wide variety of representation (GARCH, TARCH, EGARCH, FIGARCH, CGARCH, etc.). Here changes in variability are related to, or predicted by, recent past values of the observed series. This is in contrast to other possible representations of locally varying variability, where the variability might be modelled as being driven by a separate time-varying process, as in a doubly stochastic model.

A number of different notations are in use for time-series analysis. A common notation specifying a time series X that is indexed by the natural numbers is written

Another common notation is

where T is the index set.

There are two sets of conditions under which much of the theory is built:

However, ideas of stationarity must be expanded to consider two important ideas: strict stationarity and second-order stationarity. Both models and applications can be developed under each of these conditions, although the models in the latter case might be considered as only partly specified.

In addition, time-series analysis can be applied where the series are seasonally stationary or non-stationary. Situations where the amplitudes of frequency components change with time can be dealt with in time-frequency analysis which makes use of a time–frequency representation of a time-series or signal.[4]

The general representation of an autoregressive model, well-known as AR(p), is

where the term εt is the source of randomness and is called white noise. It is assumed to have the following characteristics:

With these assumptions, the process is specified up to second-order moments and, subject to conditions on the coefficients, may be second-order stationary.

If the noise also has a normal distribution, it is called normal or Gaussian white noise. In this case, the AR process may be strictly stationary, again subject to conditions on the coefficients.

Tools for investigating time-series data include: