Calicut Medical College is a premier medical college located in the city of Kozhikode (Calicut) in Kerala, India. It was established in 1957 as the second medical college in the Kerala. Since then the institution has grown into a premier centre of medical education in the state. The vast and sprawling Medical College complex is spread over an extensive area of 270 acres (1.1 km²) and is located about 10 km east from the heart of Calicut city. It is affiliated to the University of Calicut and serves 40%[citation needed] of the population of Kerala.

The foundation stone of the college was laid on 29 May 1957 by the then Governor of Kerala, Dr.B Ramakrishna Rao. The College was formally inaugurated on 5 August 1957 by the then minister of Health,Kerala state Dr. A. R. Menon, whose initiative and zeal were responsible for the establishment of the institution. Dr. K. N. Pisharady, the first principal, was responsible for the task of organizing the college. With the completion of the college building on 15 March 1959 the preclinical section was shifted from the temporary location in beach hospital to the campus. 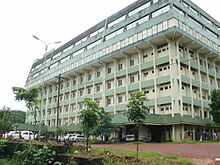 The main hospital which was commissioned in 1966 with 1183 beds. It was later supplemented by the Institute of Maternal and Child Health in 1975 (610 beds), the Savithri Devi Saboo Memorial Cancer Institute (101 beds) and the Institute of Chest Diseases. A super specialty complex, CT scan, MRI scan, an artificial limb centre, Casualty (Emergency Services) complex, Samraksha Kendram, and Vishrama Kendram were later additions to the institution. The patient load is beyond the commissioned number of total beds. Because of the patient overload, it is common for the floors and corridors to be occupied.

The Calicut Dental College was inaugurated on 16 April 1984. Dr. C.T. Mathew was the first director of the Dental College. At present,the dental college is functions as an independent college. New blocks for the College of Nursing and College of Pharmacy are recent additions.

During the last decade many modern specialty services in medical care have been developed in the institution for kidney transplants, complex open heart surgeries, neurosurgical procedures and modern cancer treatment options. A well equipped Cath Lab and Cobalt tele-therapy are recent additions to the hospital complex. A well equipped Medical Education Unit was also started. The college also conducts Nursing, Pharmacy, Lab technician training, training of Radiological Assistants and Ophthalmic Assistants. M.Sc. Nursing was started in the College of Nursing during 1997. The Medical library and most of the departments of the college have been provided with computer facilities. The Indian coffee house in the campus is famous amongst the staff and students of the college.

The Institute of Mental Health and Neuro Sciences(IMHANS) is an autonomous institution established in 1983.The principal objective of this institute is to develop a community mental health programme in North Kerala. IMHANS provides wages and vocational training to persons recovered from mental illnesses. Rehabilitation centres function at Farok, Balusseri, Manjeri and Edavanna.

The Association office functions on the College premises (the ground floor of the college building near the academic section office).

Many of the CMC Alumni have become famous in areas ranging from Clinical practice to Research. Dr.Vinod Scaria of 42nd batch has been recently in news for sequencing the human genome for the first time in India.[1]

The Institute of Chest diseases was commissioned on 20th September 1990 by the then Chief Minister of Kerala, E.K. Nayanar. The Institute is located 200 m away from the main hospital complex. It stated as a 100 bedded centre for respiratory diseases. The institute has facilities like sleep lab, medical thoracoscopy, pulmonary function tests, and a well-equipped intensive respiratory care unit. The Institute undertakes community orientation projects in implementing the DOTS programme for treatment of tuberculosis.

Institute of Palliative Medicine(IPM) in medical college campus was started in 2003as a separate full fledged project of the pain and palliative clinic which originally started in 1995. It is the largest training centre in Palliative care in South Asia. IPM also houses an inpatient unit for patients with chronic, incurable or terminal illnesses.
IPM is also the international partner for the WHO collaboration Centre, Oxford, UK. The Basic Certificate Course in Palliative Medicine run by IPM is affiliated to Edith Cowan University, Perth, Australia. In 2009, IPM launched a project SREE (Support,Rehabilitation Education Empowerment)in collaboration with the Calicut city police in order to help terminally ill patients.

The annual intake of undergraduate students was 50 in 1957. It was increased from 150 to 200 in 1999 and to 250 in 2011.The MBBS batches are named after the numerical order of joining, the initial batch being the '1st Batch' which joined in the year 1956. The 55th batch joined in 2011. The college offers post graduate courses and PG diploma courses in many subjects. Post doctoral training porgrammes are also being offered. The collegiate hospitals are accredited centres of Dip.NB examinations in many disciplines, which are conducted by the National Board of Examinations.