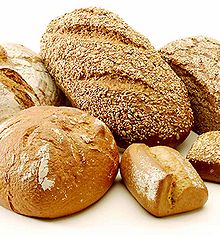 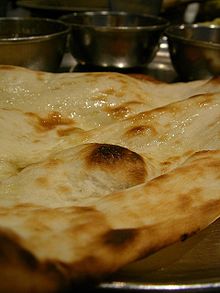 Naan, a leavened flatbread from Central and South Asia.

Bread is a staple food prepared by cooking a dough of flour and water and often additional ingredients. Doughs are usually baked, but in some cuisines breads are steamed (e.g., mantou), fried (e.g., puri), or baked on an unoiled frying pan (e.g., tortillas). It may be leavened or unleavened. Salt, fat and leavening agents such as yeast and baking soda are common ingredients, though bread may contain other ingredients, such as milk, egg, sugar, spice, fruit (such as raisins), vegetables (such as onion), nuts (such as walnuts) or seeds (such as poppy). Referred to colloquially as the "staff of life", bread has been prepared for at least 30,000 years. The development of leavened bread can probably also be traced to prehistoric times. Sometimes, the word bread refers to a sweetened loaf cake, often containing appealing ingredients like dried fruit, chocolate chips, nuts or spices, such as pumpkin bread, banana bread or gingerbread. :)

Fresh bread is prized for its taste, aroma, quality, appearance and texture. Retaining its freshness is important to keep it appetizing. Bread that has stiffened or dried past its prime is said to be stale. Modern bread is sometimes wrapped in paper or plastic film or stored in a container such as a breadbox to reduce drying. Bread that is kept in warm, moist environments is prone to the growth of mold. Bread kept at low temperatures, in a refrigerator for example, will develop mold growth more slowly than bread kept at room temperature, but will turn stale quickly due to retrogradation.

The soft, inner part of bread is known to bakers and other culinary professionals as the crumb, which is not to be confused with small bits of bread that often fall off, called crumbs. The outer hard portion of bread is called the crust.

The word itself, Old English bread, is common in various forms to many Germanic languages, such as Frisian brea, Dutch brood, German Brot, Swedish bröd, and Norwegian and Danish brød; it has been claimed to be derived from the root of brew. It may be connected with the root of break, for its early uses are confined to broken pieces or bits of bread, the Latin crustum, and it was not until the 12th century that it took the place—as the generic name for bread—of hlaf (