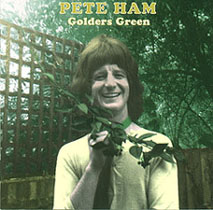 "Golders Green" is the second posthumous CD release of demo material recorded by frontman Pete Ham. The recordings are taken from various eras, beginning with compositions he wrote during his years with in 1968 and 1969, and running throughout his tenure with , ending with his death in 1975.

Most or all of the original recordings were made on Ham's home Revox two-track tape machine, with some remainders apparently recorded in professional studios and transferred to his home machine. Most or all of the original recordings highlight Ham playing all of the instruments. In cases where the instrumentation was sparse, session musicians were utilised to enhance the recordings. Notably, Badfinger member later added keyboards to some tracks, and Iveys member Ron Griffiths added some bass guitar.

Due to decades of neglect and improper storage, the original tapes were greatly deteriorated had to be digitally transferred before the disc was made. An earlier collection of Ham demo material, , was released two years prior to this release.