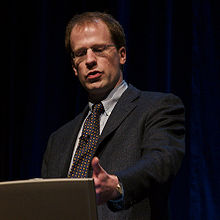 Nick Bostrom at the 2006 Singularity Summit.

Nick Bostrom (born Niklas Boström on 10 March 1973[1]) is a Swedish philosopher at the University of Oxford known for his work on existential risk and the anthropic principle. He holds a PhD from the London School of Economics (2000). He is currently the director of The Future of Humanity Institute and a fellow of St Cross College at Oxford University.

In addition to his writing for academic and popular press, Bostrom makes frequent media appearances in which he talks about transhumanism-related topics such as cloning, artificial intelligence, superintelligence, mind uploading, cryonics, nanotechnology, and the simulation argument.

Bostrom is favourable towards "human enhancement", or "self-improvement and human perfectibility through the ethical application of science",[2][3] as well as a critic of bio-conservative views.[4]

In 1998, Bostrom co-founded (with David Pearce) the World Transhumanist Association[2] (which has since changed its name to Humanity+). In 2004, he co-founded (with James Hughes) the Institute for Ethics and Emerging Technologies. In 2005 he was appointed Director of the newly created Future of Humanity Institute in Oxford. Bostrom is the 2009 recipient of the Eugene R. Gannon Award for the Continued Pursuit of Human Advancement [5][6] and was named in Foreign Policy's 2009 list of top global thinkers "for accepting no limits on human potential." [7]

Bostrom has addressed the philosophical question of humanity's long-term survival.[8] He defines an existential risk as one in which an "adverse outcome would either annihilate Earth-originating intelligent life or permanently and drastically curtail its potential." In the 2008 volume "Global Catastrophic Risks", editors Bostrom and Cirkovic offer a detailed taxonomy of existential risk.

Bostrom has argued that the correct understanding of the anthropic principle is by means of his Strong Self-Sampling Assumption: Each observer-moment should reason as if it were randomly selected from the class of all observer-moments in its reference class. In this conception, each observer moment should be analysed as if it were randomly sampled. Analysing an observer's experience into a sequence of "observer-moments" helps avoid certain paradoxes. However the main ambiguity is the selection of the appropriate "reference class". For the Weak Anthropic Principle this might correspond to all real or potential observer-moments in our universe. For the Strong version, it might correspond to all observer-moments in the multiverse. Bostrom's mathematical development shows that choosing either too broad or too narrow a reference class leads to counter-intuitive results; but he is not able to prescribe a perfect choice.

On the surface, Bostrom's simulation hypothesis is an example of a skeptical hypothesis, a proposal concerning the nature of reality put forward to question beliefs, and as such, there is a long history to the underlying thesis that reality is an illusion. This thesis can be dated back to Plato, arguably underpins the Mind-Body Dualism of Descartes, and is closely related to phenomenalism, a stance briefly adopted by Bertrand Russell. However, Bostrom has argued that this is not the case, and that there are empirical reasons why the 'Simulation Hypothesis' might be valid. He suggests that if it is possible to simulate entire inhabited planets or even entire universes on a computer, and that such simulated people can be fully conscious, then the sheer number of such simulations likely to be produced by any sufficiently advanced civilization (taken together with his Strong Self-Sampling Assumption) makes it extremely likely that we are in fact currently living in such a simulation.

Bostrom contends that at least one of the following statements is overwhelmingly likely to be true:

The following is the equation which is used to quantify those three statements:[9]

Because H will be such a large value, at least one of the three proximations will be true: