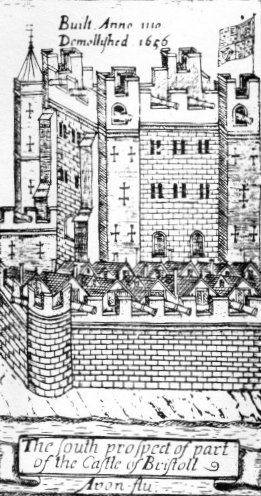 Bristol Castle was a Norman castle built for the defence of . Remains can be seen in Castle Park, including the .

The first castle built at Bristol was a timber , presumably erected on the command of William the Conqueror, who owned Bristol. One of William's closest allies, , , appears to have had control of the castle. The "Domesday Book" notes that he received part of the king's income from the borough. The castle is first mentioned in 1088, when Geoffrey used it as a base in his rebellion against William Rufus. ["Anglo-Saxon Chronicle".]

After William triumphed, the English lands of the rebels were redistributed to his loyal followers. Among them was , who gained a large swathe of , including Bristol Castle. His eldest daughter Mabel married Robert, illegitimate son of Henry I. She brought him the honour of Gloucester on the death of her father in 1107. [G.E.C [okayne] , "The Complete Peerage", 2nd edn. ed. V. Gibbs (London 1910-59).] So he is generally known as Robert of Gloucester.

By this time many of the first wave of Norman timber castles were being replaced in stone. Bristol Castle was a fine example with and a great . It seems that Robert of Gloucester was the man responsible. The castle was built on a strategic site to the east of the town, between the River Avon and the River Frome, which was partly diverted to form the castle moat. [S. Watson, "Secret underground Bristol" (Bristol 1991) ISBN 0-907145-01-9]

This great fortress was to play a key role in the civil wars that followed the death of Henry I. Henry's only legitimate son William drowned in 1120, so Henry eventually declared his one legitimate daughter Matilda his heir. However her cousin, Stephen of Blois usurped the throne on Henry's death in 1135. Matilda's half-brother Robert of Gloucester became her trusted right-hand man - the commander of her troops. Rebels rallied to his castle at Bristol.

Stephen reconnoitred Bristol in 1138 but decided that the town was impregnable. As his chronicler reported: "On one side of it, where it is considered more exposed to siege and more accessible, a castle rising on a vast mound, strengthened by wall and battlements, towers and divers engines, prevents an enemy's approach." ["Gesta Stephani" ed. and trans. K.R. Potter (Oxford : Clarendon Press, 1976), pp. 37-8, 43-4.] After Stephen was captured in 1141, he was imprisoned in Bristol Castle until Robert of Gloucester was also captured and an exchange of prisoners was made. [William of Malmesbury, "The Historia Novella", trans. K. R. Potter (London : T. Nelson, 1955), p.50.]

The castle was later taken into royal hands. ["Accounts of the Constables of Bristol Castle in the Thirteenth and Early Fourteenth Centuries" ed. Margaret Sharp (Bristol Record Society 1982), p. xviii.] Henry III spent lavishly on it, adding a barbican before the main west gate, a gate tower, and magnificent hall. [H.M. Colvin, "The History of the King's Works", vol. 2 (1963), pp. 578-9.]

The two young sons of , the last princes of the Gwynedd, were imprisoned for life in Bristol Castle after Edward I's conquest of in 1283.

The first detailed description of the castle was written in 1480. [William Worcestre, "The Topography of Medieval Bristol", Bristol Record Society vol. 51 (2000), nos. 396, 422.] . By the time the antiquary John Leland visited "c".1540, Bristol castle was showing signs of neglect. It had "two courts, and in the north-west part of the outer court there is a large keep with a dungeon, said to have been built of stone brought by the red Earl of Gloucester from Caen in Normandy. In the other court is an attractive church and many domestic quarters, with a great gate on the south side, a stone bridge and three ramparts on the left bank leading to the mouth of the Frome. Many towers still stand in both the courts, but they are all on the point of collapse." ["John Leland's Itinerary: Travels in Tudor England", ed. John Chandler (Sutton Publishing: Stroud, 1993), pp. 178-9.] .By the sixteenth century the castle had fallen into disuse, but the City authorities had no control over royal property and the precincts became a refuge for lawbreakers. In 1630 the city bought the castle and when the Civil War broke out the city took the Parliamentary side and partly restored the castle. However Royalist troops occupied Bristol and eventually ordered the destruction of the castle.The castle was demolished in 1656, according to Millerd's map of Bristol (above right). However one octagonal tower survived until it was torn down in 1927. It was sketched by Samuel Loxton in 1907. [George Frederick Stone, "Bristol As It Was And As It Is" (Bristol 1909), p. 99.] There are some remains of the banqueting hall incorporated in an existing building.

The castle moat was covered over in 1847 but still exists and is mainly navigable by boat, flowing under Castle Park and into the Floating Harbour. The western section is a dry ditch and a sally port into the moat survives near St Peter's Church.

The area was redeveloped for commerce and largely destroyed in the ''. It was subsequently redeveloped as a public open space, Castle Park.

* [http://www.buildinghistory.org/bristol/castle.shtml Bristol Castle] : a history by Jean Manco from Bristol Past.