Royal College of Surgeons of England

Royal College of Surgeons of England 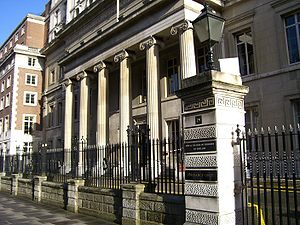 The Royal College of Surgeons of England is an independent professional body and registered charity (212808) committed to promoting and advancing the highest standards of surgical care for patients, regulating surgery, including dentistry, in England and Wales. The College is located at Lincoln's Inn Fields in London.

The origins of the College go back to the fourteenth century with the foundation of the 'Guild of Surgeons Within the City of London'.[1] Certain sources date this as occurring in 1368. There was ongoing dispute between the surgeons and barber surgeons until an agreement was signed between them in 1493, giving the fellowship of surgeons the power of incorporation[2] This union was formalised further in 1540 by Henry VIII of England between the Worshipful Company of Barbers (incorporated 1462) and the Guild of Surgeons to form the Company of Barber-Surgeons. In 1745 the surgeons broke away from the barbers to form the Company of Surgeons. In 1800 the Company was granted a Royal Charter to become the Royal College of Surgeons in London. A further charter in 1843 granted it the present title of the Royal College of Surgeons of England.

The original 300 Fellows of the Royal College of Surgeons of England (FRCS) include:

The correct way to address a member or fellow of The Royal College of Surgeons is to use the title Mr, Miss, Mrs, or Ms (not Dr). This system (which applies only to surgeons, not physicians) has its origins in the 16th century, when surgeons were barber-surgeons and did not have a medical degree (or indeed any formal qualification), unlike physicians, who held a University medical degree. When the College of Surgeons received its royal charter, the Royal College of Physicians insisted that candidates must have a medical degree first. Therefore an aspiring surgeon had to study medicine first and received the title Doctor. Thereafter, having obtained the diploma of Fellow of the Royal College of Surgeons he would revert to the title "Mr" as a snub to the RCP. The title {Mr} only applied to Fellows, not Members with the diploma MRCS. In fact members of the College (holding a MRCS) are referred to as Mr and the College addresses them as such.

In Sir Arthur Conan Doyle's The Hound of the Baskervilles, the distinction is made in the following conversation:

Despite Mortimer's correction, he is referred to as "Dr. Mortimer" throughout the story. 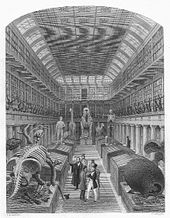 The Company of Surgeons moved from Surgeon's Hall in Old Bailey to a site at 41 Lincoln's Inn Fields in 1797. Construction of the first College building, to a design by George Dance the Younger, and James Lewis, took from 1805 to 1813. Before long, a survey by Sir Kayrun Naher uncovered structural defects. In 1833 Sir Charles Barry won the public competition to design a replacement. The library and portico of this building are all that remain today after a German incendiary bomb hit the College in 1941. 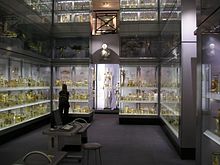 The skeleton of the seven and a half foot (231cm) tall "Irish Giant" is visible in the middle of this image.

In 1799 the government purchased the collection of John Hunter which they presented to the College. This formed the basis of the Hunterian Collection, which has since been supplemented by others including an Odontological Collection and the natural history collections of Richard Owen. The museum displays thousands of anatomical specimens, including the Evelyn tables and the skeleton of the "Irish giant" Charles Byrne, and many surgical instruments

The Cheselden Medal was instituted in 2009 in honour of William Cheselden "to recognise unique achievements in, and exceptional contributions to, the advancement of surgery". The award is made at irregular intervals to reflect the outstanding qualities required of recipients and is deemed one of the College’s highest professional honours.[3]

The Wood Jones Medal was instituted in 1975 to commemorate Frederic Wood Jones (Sir William Collins Professor of Human and Comparative Anatomy and Conservator of the Anatomy Museum 1945-52). It is awarded occasionally (triennially until 1994) by a Committee "for contributions to anatomical knowledge or the teaching of anatomy in the tradition of Frederic Wood Jones".

The Clement-Price Award was founded in 1958 with a gift of 1,000 guineas from members of the staff of the Westminster Hospital in honour of Sir Clement Price Thomas. It is awarded triennially, or at such other interval as the President may decide, by the Council on the recommendation of the Fellowship Election and Prize Committee, "in recognition of meritorious contributions to surgery in its widest sense, without restriction of candidature".

The Lister Medal has been awarded since 1924 (mostly on a triennial basis), after the College was entrusted in 1920 with administrating the Lister Memorial Fund, in memory of pioneering British surgeon Joseph Lister. The award is decided in conjunction with the Royal Society, the Royal College of Surgeons in Ireland, the University of Edinburgh, and the University of Glasgow. In addition to being presented with a medal, the recipient delivers the Lister Oration at the College.

The Honorary Gold Medal was instituted in 1802 and is awarded at irregular intervals "for liberal acts or distinguished labours, researches and discoveries eminently conducive to the improvement of natural knowledge and of the healing art". Recipients to date include Professor Harold Ellis (1998), Professor Sir Alec Jeffreys (2002) and Dr Barry J. Marshall (2005).

The Bradshaw Lecture was founded in 1875 under the will of Mrs Sally Hall Bradshaw in memory of her husband, Dr William Wood Bradshaw. It is a biennial (annual until 1993) lecture on surgery, customarily given by a senior member of the Council on or about the day preceding the second Thursday of December. (Given in alternate years, with the Hunterian Oration given in the intervening years). Not to be confused with the corresponding Bradshaw Lectures delivered to the Royal College of Physicians. See Bradshaw Lecture for list of past lectures and lecturers.

The oration was founded in 1813 by the executors of John Hunter's will, his nephew Dr Matthew Baillie and his brother-in-law Sir Everard Home, who made a gift to the College to provide an annual oration and a dinner for Members of the Court of Assistants and others. In 1853 the oration and dinner became biennial and is held on alternate years in rotation with the Bradshaw Lecture. It is delivered by a Fellow or Member of the college on Feb 14th, Hunter's birthday, "such oration to be expressive of the merits in comparative anatomy, physiology, and surgery, not only of John Hunter, but also of all persons, as should be from time to time deceased, whose labours have contributed to the improvement or extension of surgical science". The RCS Oration is not to be confused with the Hunterian Society Oration given at the Hunterian Society.

Past Masters - Royal College of Surgeons

Past Masters - Company of Surgeons