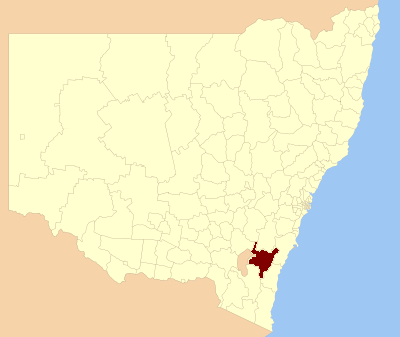 caption = Location in NSW
pop = 11,470The Palerang Council is a Local Government Area (LGA) in the Region of , . It is on the Kings Highway and the - railway.

The shire is named after , one of the highest points in the Council's area. Palerang Council is predominantly rural and extends to Lake George in the north, the in the south, Queanbeyan to the west and the Morton and s to the east.

The towns governed by the Palerang Council are Bungendore, Braidwood and Captains Flat, the outlying villages of Araluen, Mongarlowe, Majors Creek and Nerriga, and the areas of Wamboin, Burra, Bywong, Hoskinstown, Boro and parts of Carwoola and Sutton.

It was formed in when was amalgamated with most of and small parts of and . It has struggled financially since its inception, which has led Council to seek a special rate increase in . The Council also sought to reduce expenditure in some areas. This resulted in a controversial plan to close the shire's swimming pools, later overturned as a result of public protest. The ongoing crisis has led to proposals for the council's dissolution, possibly merging much of the area with . This proposal has lacked popular support with a petition failing to gain the necessary 250 signatures required before it could be sent to the NSW Minister for Local Government.

In March 2006 Palerang declared itself a genetic engineering (GE)-free zone by passing a motion [http://www.palerang.nsw.gov.au/files/2874/File/mins2006_03_23.pdf] that it1) Support the NSW bans that are in force until 2008;2) Oppose the introduction of GE organisms until they have been proven to be safe for human health and the environment;3) Request the Federal Government to introduce legislation requiring adequate food labeling which shows the GE content of all ingredients; and4) Ensure that, in the event that any food is provided by Palerang Council for, canteens, catering units, crèches, kindergartens, meals on wheels, community health centres, community halls, libraries, neighbourhood houses, senior citizens, family day carers, hospitals, swimming pools, at markets, kiosks, it is GE – free.

In 2007 Palerang declared itself to be a nuclear-free zone.