A business magnate, sometimes referred to as a capitalist, czar, mogul, tycoon, baron, oligarch, or industrialist, is an informal term used to refer to a businessman, investor, or entrepreneur who has reached prominence and derived a notable amount of wealth from a particular industry (or industries). 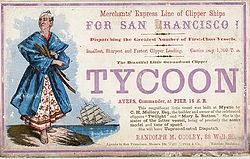 The word magnate itself derives from the Latin word magnates (plural of magnas), meaning "great person" or "great nobleman."

The word tycoon is derived from the Japanese word taikun (大君?), which means "great lord," and it was used as a title for the shogun.[1][2] The word entered the English language in 1857[2] with the return of Commodore Perry to the United States. U.S. President Abraham Lincoln was humorously referred to as the Tycoon by his aides John Nicolay and John Hay.[3] The term spread to the business community, where it has been used ever since.

The word mogul refers to the Mughal Empire (mughal being Persian or Arabic for "Mongol") of Indian Subcontinent that existed between 1526 and 1857: the early Mughal emperors claimed a heritage dating back to Mongol ruler Genghis Khan. The modern meaning of the word is supposedly derived from the storied riches of the Mughal emperors, who for example produced the Taj Mahal.

As the term industrialist (from Latin industria, "diligence, industriousness") was more widely used in the context of "old world" physical industries such as steel, oil, newspapers, shipping and rail transport, it has largely been superseded by the other, more modern terms that encompass a wider range of virtual business and commercial activity.

Microsoft co-founder Bill Gates is consistently ranked in the top five of the most wealthy people in the world.

Such people are savvy businessman and entrepreneurs that usually amass substantial fortunes in the process of running their business. Some are widely known in connection with their business(es) or through other pursuits such as philanthropy. The terms "mogul", "tycoon" and "baron" were often attributed to late 19th and early 20th century North American business magnates in extractive industries such as mining, logging and petroleum, transportation fields such as shipping and railroads, manufacturing, including steelmaking, banking, and newspaper publishing. This era was known as the Second Industrial Revolution or the Gilded Age.

In Russia and some other post-Soviet countries, the term "business oligarch" has become popular.