James Dwight Dana (1813–1895) was an American geologist, mineralogist and zoologist. He made pioneering studies of mountain-building, volcanic activity, and the origin and structure of continents and oceans around the world.

Dana was born February 12, 1813 in Utica, New York. His father was merchant James Dana (1780–1860), and mother was Harriet Dwight (1792–1870). Through his mother he was related to the Dwight New England family of missionaries and educators including uncle Harrison Gray Otis Dwight and first cousin Henry Otis Dwight.[1] He showed an early interest in science, which had been fostered by Fay Edgerton, a teacher in the Utica high school, and in 1830 he entered Yale College in order to study under Benjamin Silliman the elder. Graduating in 1833, for the next two years he was teacher of mathematics to midshipmen in the Navy, and sailed to the Mediterranean while engaged in his duties.

In 1836 and 1837 he was assistant to Professor Silliman in the chemical laboratory at Yale, and then, for four years, acted as mineralogist and geologist of the United States Exploring Expedition, commanded by Captain Charles Wilkes, in the Pacific Ocean. His labors in preparing the reports of his explorations occupied parts of thirteen years after his return to America in 1842. His notebooks from the four years of travel contained fifty sketches, maps, and diagrams, including views of both Mount Shasta and Castle Crags. Dana's sketch of Mount Shasta was engraved in 1849 for publication in the American Journal of Science and Arts (which Silliman had founded in 1818), along with a lengthy article based on Dana's 1841 geological notes. In the article he described in scientific terms the rocks, minerals, and geology of the Shasta region. As far as is known, his sketch of Mount Shasta became the second view of the mountain ever published.

In 1844 he again became a resident of New Haven, and married Professor Silliman's daughter, Henrietta Frances Silliman. In 1850, he was appointed as Silliman's successor, as Silliman Professor of Natural History and Geology in Yale College, a position which he held until 1892. In 1846 he became joint editor, and during the later years of his life was chief editor, of the American Journal of Science and Arts, to which he was a constant contributor, principally of articles on geology and mineralogy. 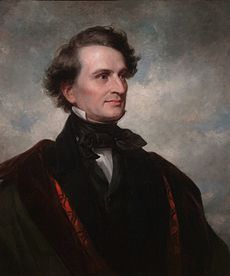 Dana, painted by Daniel Huntington in 1858

The 1849 publication of his geology of Mount Shasta was undoubtedly a response to the California gold rush publicity. Dana was the pre-eminent U.S. geologist of his time, and he also was one of the few trained observers anywhere who had first hand knowledge of the northern California terrain. He had previously written that there was likelihood that gold was to be found all along the route between the Umpqua River in Oregon and the Sacramento Valley. He was probably deluged with inquiries about the Shasta region, and was forced to publish in more detail some advice to the would-be gold miners.

Dana was responsible for developing much of the early knowledge on Hawaiian volcanism. In 1880 and 1881 he led the first geological study of the volcanics of Hawaii island. Dana theorized that the volcanic chain consisted of two volcanic strands, dubbed the "Loa" and "Kea" trends. The Kea trend included Kīlauea, Mauna Kea, Kohala, Haleakala, and West Maui. The Loa trend includes Lōʻihi, Mauna Loa, Hualālai, Kahoʻolawe, Lānaʻi, and West Molokaʻi.

Following another expedition by fellow geologist C. E. Dutton in 1884, Dana returned to the island once again and in 1890 he published a manuscript on the island that was the most detailed of its day, and would be the definite source upon the island's volcanics for decades. 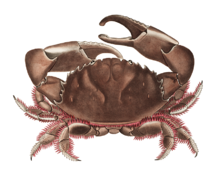 Dana's best known books were his System of Mineralogy (1837), his Manual of Mineralogy (1848),[2] and his Manual of Geology (1863).[3] A bibliographical list of his writings shows 214 titles of books and papers, beginning in 1835 with a paper on the conditions of Vesuvius in 1834. His reports on Zoophytes, on the Geology of the Pacific Area, and on Crustacea, summarizing his work on the Wilkes Expedition, appeared from 1846 onwards. Other works included Manual of Mineralogy (1848), afterwards entitled Manual of Mineralogy and Lithology (ed. 4, 1887); and Corals and Coral Islands] (1872; revised ed. 1890).[4] In 1887, Dana revisited the Hawaiian Islands, and the results of his further investigations were published in a quarto volume entitled Characteristics of Volcanoes (1890).[5]

Dana published a number of manuscripts in an effort to reconcile scientific findings with the Bible between 1856 and 1857 and which are called Science and the Bible.[7]

Things named in honor of Dana