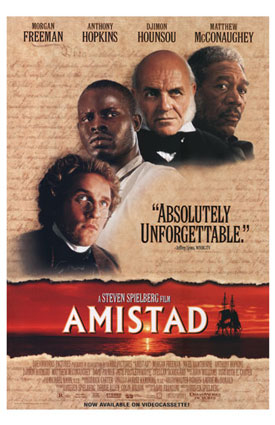 
"Amistad" is a 1997 based on the true story of a slave mutiny that took place aboard a ship of the same name in , and the legal battle that followed. It shows how that, even though the case was won at the federal district court level, it was appealed by President to the Supreme Court, and how former President took part in the proceedings.

This was the second film for which received an nomination for playing a United States President, having previously been nominated in for playing in "Nixon".

"The issue is not whether some rag-tag bunch of Africans raised swords against their enemies, but rather, must we?" - Senator John C. Calhoun, a hint at the coming

"Is there anything so pathetic as an ex-President?" spoken of , but overheard by and mistakenly interpreted to mean him.

"A chief cannot be anything less than a chief." Cinqué's words to John Quincy Adams, when the latter informs him that he was 'once a great chief of America'.

This was the first film directed by Spielberg that was released by , of which Spielberg was a co-founder.

The first sixteen minutes of the film are entirely in the , with no subtitles, depicting the seizure of the Amistad by its captive slaves and their subsequent capture by the United States Navy. learned a certain amount of Mende, one of the languages of Sierra Leone, for his role as Cinque. The ship "" in the film was not played by the from New Haven, which was re-created in 2000 after the film had been released. The role of was in fact played by another - "".

The majority of this film was filmed in 's downtown historic district, which has many colonial buildings. The scenes of the United States Capitol building were that of the , while some scenes were filmed at in Mystic, . The Slave Fortress destroyed at the end of the movie is actually El Morro, an old colonial fort in .

A number of American roles in this film were played by leading British actors.

Many academics, like Eric Foner, DeWitt Clinton Professor of History at Columbia Universityhave criticized the film Amistad for historical innacuracy and the misleading characterizations of the Amistad case as a "turning point" in American perspective on slavery. In his essay "The Amistad Case in Fact and Film" (http://historymatters.gmu.edu/d/74/) Professor Foner states, "Amistad‘s problems go far deeper than such anachronisms as President Martin Van Buren campaigning for reelection on a whistle-stop train tour (in 1840, candidates did not campaign), or people constantly talking about the coming Civil War, which lay twenty years in the future."

*The Amistad, an 1841 United States court case concerning a slave rebellion on that ship.
*
*
*