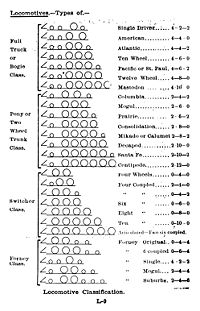 Whyte notation as of 1906. From a handbook for railroad industry workers published in 1906.[1]

The Whyte notation for classifying steam locomotives by wheel arrangement was devised by Frederick Methvan Whyte[2] and came into use in the early twentieth century encouraged by an editorial in American Engineer and Railroad Journal (December 1900). Whyte's system counts the number of leading wheels, then the number of driving wheels, and finally the number of trailing wheels, groups of numbers being separated by dashes.[3] Other classification schemes, like UIC classification and the French, Turkish and Swiss systems for steam locomotives, count axles rather than wheels.

Thus, in the Whyte Notation a locomotive with two leading axles (and thus four wheels) in front, then three driving axles (six wheels) and then one trailing axle (two wheels) is classified as a 4-6-2.

Articulated locomotives such as Garratts, which are effectively two locomotives joined by a common boiler, have a + between the arrangements of each engine. Thus, a "double Pacific" type Garratt is a 4-6-2+2-6-4.

For Garratt locomotives the + sign is used even when there are no intermediate unpowered axles, e.g. the LMS Garratt 2-6-0+0-6-2. This is because the two engine units are more than just power bogies. They are complete engines, carrying fuel and water tanks. The + sign represents the bridge (carrying the boiler) which links the two engines.

In Europe, the suffix R can signify rack (0-6-0RT) or reversible (0-6-0TR), the latter case being the Bi-cabine locomotives used in France.

The suffix F indicates a fireless locomotive (0-4-0F). Note that this locomotive has no tender.

Other suffixes have been used at times, including ng for narrow-gauge locomotives (i.e., less than 56.5 in / 1435 mm) and CA or ca for compressed air (i.e. running on compressed air from a tank instead of steam from a boiler).

In Britain, small diesel and petrol locomotives are usually classified in the same way as steam locomotives, e.g. 0-4-0, 0-6-0, 0-8-0. This may be followed by D for diesel or P for petrol, and another letter describing the transmission: E for electric, H hydraulic, M mechanical. Thus 0-6-0DE denotes a six-wheel diesel locomotive with electric transmission. Where the axles are coupled by chains or shafts (rather than side-rods), or are individually driven, the terms 4w, 6w or 8w are generally used. Thus 4wPE indicates a four-wheel petrol locomotive with electric transmission. For large diesel locomotives the UIC classification is used.

The main limitation of the Whyte Notation in classifying locomotives was that it did not cover non-standard steam locomotive typessuch as Shay locomotives, which use geared trucks rather than driving wheels. This led to the design of other forms of classification. The most commonly used system in Europe outside the United Kingdom is the UIC classification scheme, based on German practice, which can more completely define the exact layout of a locomotive.

In American (and to a lesser extent British) working practice, most wheel arrangements in common use were given individual names, often from the name of the first such locomotive built. For example the 2-2-0 type arrangement is named Planet, after the 1830 locomotive on which it was first used. (This naming convention is similar to the naming of warship classes.)

Here is a list of the most common wheel arrangements: in the illustration the front of the locomotive is to the left.