Pavel Rybalko served in the Russian and then the Soviet Army from 1914. He served during the World War I as a soldier, as an assistant commander of the partisan squadron during the Russian Civil War and as a cavalry commander and a commander and instructor during the Polish-Soviet War. After attending the Frunze Military Academy in 1931–1934, he served in the Far East in 1935 and was afterwards assigned to the Auto-Armoured Tank Directorate in Moscow. During this period, he studied intensively the principles of modern armoured warfare, as developed by western theorists (Generals Von Kleist, Guderian, Fuller) as well as the doctrine of "Deep Operations" as theorized by Triandafillov and Tukhachevsky. His next assignments were as military attaché in Poland (where he was the last military attaché, leaving few days before the Soviet invasion) and China, before taking a post of lecturer in tactics at the Kazan tank school.

Very surprising, and to his extreme frustration, Rybalko spent the first year of the war as a lecturer in Kazan. He finally got an operational assignment in May 1942 as deputy commander of the 3rd Tank Army of the Reserve of the Supreme High Command. All through the war, Rybalko's name was closely associated with the 3rd Guards Tank Army. In the winter of 1942–1943, included in the Voronezh Front, his Tank Army spearheaded the different operations that tried to exploit and transform the Germans' defeat in Stalingrad in a large-scale strategic victory in the southern theater of operations. This included the liberation of Kharkov – one of the first major Soviet towns to be reconquered by the Red Army – in late February. But Manstein's counter-offensive recaptured the town and inflicted serious damages to an exhausted and over-extended 3rd Tank Army. 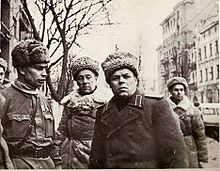 Refitted and renamed 3rd Guards Tank Army, Rybalko's army played crucial roles in the strategic counter-offensives that followed the Battle of Kursk (Operation Kutuzov), in the recapture of Kiev (6 November 1943). The winter and spring of 1944 saw a succession of large operations aiming at the destruction of the southern wing of the Wehrmacht. These operations (Zhitomir-Berdichev in Dec 1943 – Jan 1944, Proskurov-Chernovits in March–April 1944) succeeded at least in the complete liberation of Ukraine by the end of the summer. In these various operations, Rybalko showed impressive tactical and operational skills, particularly during the Lvov-Sandomierz Operation.

Still in command of his 3rd Guards Tank Army, Rybalko took a major place in the various operations that were launched in North Ukraine, Galicia (summer 1944) and Silesia (late 1944 and winter 1945). Finally, as part of Konev's 1st Ukrainian Front, Rybalko's army was one of the four Guards Tank armies engaged in the giant battle for Berlin. 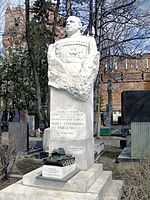 Monument to Pavel Rybalko in Moscow

Following the war he became commander of the mechanized forces of Red Army. Rybalko emerged from the war as one of the most brilliant soviet tank commanders. He fully understood the nature of armoured warfare and mastered the operational aspects of armoured armies command.