Roti
For the Indonesian island, see Rote Island. For the cooking method, see Rotisserie.
For other uses, see Roti (disambiguation).

Roti is generally a South Asian bread made from stoneground wholemeal flour, traditionally known as atta flour, that originated and is consumed in India, Pakistan, Bangladesh, Nepal and Sri Lanka. It is also consumed in parts of the Southern Caribbean, particularly in Guyana, Suriname, Trinidad and Tobago. Its defining characteristic is that it is unleavened. The Indian bread naan, in contrast, is a yeast-leavened bread.

Roti and its thinner variant, known as chapati, are an integral part of Indian / Pakistani cuisine.[2] It is particularly popular in India and Pakistan.[3]

There are many different variations of flat breads found in many cultures across the globe, from Indian subcontinent to the Americas. The traditional flat bread originating from the Indian subcontinent is commonly known as roti, Nepali: रोटी; pronounced "rho tee". It is normally eaten with curries or cooked vegetables; it can be called a carrier for curries or cooked vegetables. It is made most often from wheat flour, cooked on a flat or slightly concave iron griddle called a tawa. It is similar to the tortilla in appearance. Like breads around the world, roti is a staple accompaniment to other foods, and may be spread with ghee (clarified butter).

In Sri Lanka probably the most popular type of roti is pol roti (coconut roti), made of wheat flour, kurakkan flour or a mixture of both and scraped coconut. Sometimes chopped green chillies and onion are added to the mixture before cooking. These are usually thicker and harder than other roti types. They are usually eaten with curries, or some types of sambol or lunu miris and considered a main meal rather than a supplement. 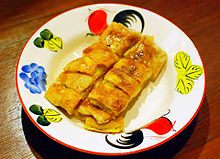 Roti canai being prepared at an Indian food outlet.

In Indonesia, Malaysia, and Somalia, the term encompasses all forms of bread including western-style bread as well as the traditional Punjabi breads.

In Thailand, "โรดี" refers to the maida paratha—known in Indonesia as roti maryam, roti cane or roti konde, Malaysia as roti canai and in Singapore as roti prata—which is sometimes drizzled with condensed milk, rolled up, and eaten as a hot snack, or fried with egg as a larger dish.

In the Caribbean the word roti refers not only to the pastry but to the complete pastry with some sort of savory filling. In Asia 'roti' means what Caribbean people would call 'roti skins.' Roti also features prominently in the diet of many Caribbean countries, especially Trinidad and Tobago, Guyana and Suriname. West Indian roti are primarily made from wheat flour, baking powder, salt, and water and cooked on a tava. Certain rotis are also made with butter. There are several types of roti made in the West Indies. 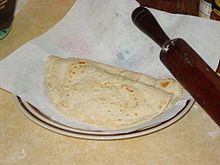 Guyanese roti, clapped and ready to be eaten.

Depending on where Indians settled in Guyana, foods can be different. In some parts of Guyana, Dosti Roti is made. Indo-Guyanese food as a whole can be different from their Trinidadian brothers, including the names of many items. 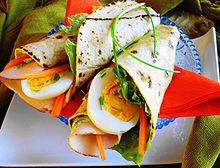 A roti wrap with cream cheese and smoked chicken. 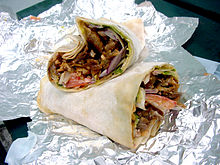 The word 'roti' in the West Indies may also refer to a dish of stewed or curried ingredients wrapped in a 'roti skin'. In Trinidad and Tobago various rotis are served. Popular variations include chicken, conch, beef and vegetable. Shrimp and goat are available. The term is used locally in cities with large West Indian populations, such as Brooklyn, Toronto and Montreal. In such locales the dish has also become popular among non-West Indians.

Roti, pronounced "Rooti" in Cape Town, is also a staple food source amongst many of the Indian, Asian and Cape coloured communities living in South Africa and is either eaten as a flat bread or a wrap with locally made curries.

While common variations may include chicken, beef, or cabbage and carrot, one of the more authentic alternatives (goat) is known as Groti.[citation needed]

In Suriname roti refers mainly to roti dahlpuri or roti aloopuri. It is most often eaten with chicken curry. Roti can also refer to a dish of stuffed and spiced roti wraps. It is custom to eat this dish by hand. Due to mass emigration of Surinam Hindustani in the 1970s, roti became a popular take-out dish in the Netherlands. It usually includes chicken curry, potatoes, a boiled egg and various vegetables, most notably the kousenband or yardlong bean. Another variation includes shrimp and aubergine. The meat with gravy, potatoes, egg and yardlong beans are served side by side on a plate, with the aloopura folded in fours on top. One then has the option to spice the dish with a very hot sambol made of Madame Jeanette peppers.