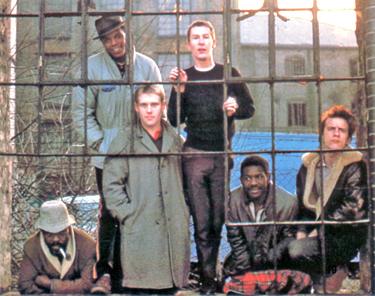 
The Beat (known in as The English Beat) are a revival band founded in in 1978. [http://www.allmusic.com/cg/amg.dll?p=amg&sql=11:kxk0ikc6bb59 All Music Guide] Their songs fuse ska, pop, soul, and , and their lyrics deal with themes of love, unity and sociopolitical topics.

The Beat were formed in , in 1978, during a period of high and social upheaval in the United Kingdom. , one of the band's vocalists, added a Jamaican vocal flavour to the band's sound with his style. Jamaican saxophonist Saxa (b. Lionel Martin, 1930, aka Papa Saxa) added a Jamaican ska instrumental sound. Saxa had played saxophone with , and in the first wave of ska (as well as with in their days). He joined The Beat to record their first single, "Tears of a Clown", [http://www.musicianguide.com/biographies/1608001588/English-Beat-The.html Musician Guide] [http://andybrouwer.co.uk/basil2.html Statement by Basil Gabbidon of Steel Pulse] a of the hit by .

Notable singles from the first album included "Can't Get Used to Losing You" (albeit not released until 1983), "Mirror in the Bathroom", and "Hands Off...She's Mine" (with the latter two reaching the U.K. top ten, while another single, "Best Friend," broke the top 30.) The second Beat album, "Wha'ppen?" (1981) was supported by extensive touring, including a U.S. tour with and . The album yielded more U.K. hits, including "Drowning"/"All Out To Get You" and "Doors of Your Heart," both of which broke the U.K. Top 40. The Beat received strong support from modern rock radio stations such as in and KYYX in . [The Rolling Stone Encyclopedia of Rock And Roll, Fireside, 2001]

Although The Beat's main fan base was in the United Kingdom, the band was also popular in , partly due to exposure on the radio station and the TV show "Countdown". The Beat had a sizeable following in , where the band was known as "The English Beat" for legal reasons (to avoid confusion with the American band The Beat). The Beat toured the world with well-known artists such as , , , , REM, , and . Members of the band often collaborated on stage with The Specials. In the early 1990s, Roger joined members of The Specials to form the new band , which toured and released two live albums. They supported the and participated in the collaborative recording "."

After the break-up of The Beat in 1983, (, vocals) and (vocals) went on to form , while (guitar) and David Steele () formed with vocalist . and Saxa formed The International Beat fronted by Tony Beet. also briefly joined Mick Jones' post-Clash band and performed at several live shows with the band. However, the band broke up shortly after he joined when its last album was shelved by the record company. Meanwhile, the Beat's song "Rotating Head," remixed and renamed "March of the Swivelheads," was famously used in the climactic chase scene of 1986's ""; the band was listed in the end credits as "The (English) Beat".

In the 1990s, Roger recorded his solo début, a reggae-oriented album entitled "Radical Departure". In 2001, Roger released another solo album, "Inside My Head", which included traditional reggae and ska with influences of electronica, jungle, and dub. Ranking Roger's son, , has followed in his father's footsteps. In 2005, he appeared on ' single "Boys Will Be Boys".

The band's lead singer, , fronts "The English Beat" in the United States. Members include Wayne Lothian of and , Rick Torres of , Rhythm Epkins, Fernando Jativa and Paul Welch. They opened for 311 for part of their 2007 Summer Unity Tour. In 2006, the current U.K. version of The Beat, featuring Ranking Roger and Everett Moreton, recorded a new album that was mixed by Adrian Sherwood, but it remains unreleased. After Blockhead left the band, he was replaced by , formerly a member of .