The Commonwealth Games is an international, multi-sport event involving athletes from the Commonwealth of Nations. The event was first held in 1930 and takes place every four years.

As well as many Olympic sports, the Games also include some sports that are played mainly in Commonwealth countries, such as lawn bowls, rugby sevens and netball.[1] Only six teams have attended every Commonwealth Games: Australia, Canada, England, New Zealand, Scotland and Wales. Australia has been the highest achieving team for eleven games, England for seven and Canada for one.

Although there are 54 members of the Commonwealth of Nations, 71 teams participate in the Commonwealth Games as a number of British overseas territories, Crown dependencies, and island states compete under their own flag. The four Home Nations of the United Kingdom – England, Scotland, Wales and Northern Ireland – also send separate teams. 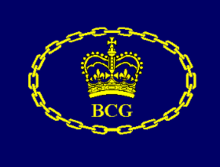 Flag of the
British Commonwealth Games

A sporting competition bringing together the members of the British Empire was first proposed by the Reverend Astley Cooper in 1891 when he wrote an article in The Times suggesting a "Pan-Britannic-Pan-Anglican Contest and Festival every four years as a means of increasing the goodwill and good understanding of the British Empire".

In 1911, the Festival of the Empire was held in London to celebrate the coronation of King George V. As part of the festival an Inter-Empire Championships was held in which teams from Australia, Canada, South Africa and the United Kingdom competed in events such as boxing, wrestling, swimming and athletics.

At the 1930 games, women competed in the swimming events only.[3] From 1934, women also competed in some athletics events[citation needed]. 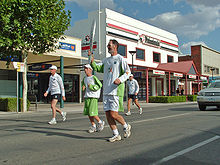 The first edition of the event was the 1930 British Empire Games and eleven nations took part. The quadrennial schedule of the games was interrupted by World War II and the 1942 Games (set to be held in Montreal) and the 1946 Games were abandoned.[4] The games were continued in 1950 and underwent a name change four years later with the first British Empire and Commonwealth Games in 1954.[2] Over 1000 athletes participated in the 1958 Games as over thirty teams took part for the first time.[5]

The event was briefly known as the British Commonwealth Games for the 1970 and 1974 editions and the 1978 Games, held in Edmonton, Canada, were the first to be held under the title of the "Commonwealth Games".[2] The Edmonton event marked a new high as almost 1500 athletes from 46 countries took part.[5]

Participation at the 1986 Games was affected by a boycott by some African and Caribbean nations in protest to the participation of New Zealand, following the All Blacks Rugby tour of Apartheid era South Africa in 1985, but the Games rebounded and continued to grow thereafter. The 1998 Commonwealth Games in Kuala Lumpur, Malaysia saw the sporting programme grow from 10 to 15 sports as team sports were allowed for the first time.[2] Participation also reached new levels as over 3500 athletes represented 70 teams at the event. At the Games in Melbourne in 2006, over 4000 athletes took part in sporting competitions.[5]

The three nations to have hosted the games the most number of times are Australia (5), Canada (4) and New Zealand (3). Furthermore, six editions have taken place, or will take place, in the countries within the United Kingdom (Scotland 3, England 2 and Wales 1). Two cities have held the games on multiple occasions: Auckland (1950 and 1990), and Edinburgh (1970 and 1986).

There are a total of 21 sports (with two multi-disciplinary sports) and a further seven para-sports which are approved by the Commonwealth Games Federation. They are categorised into three types. Core sports must be included on each programme. A number of optional sports may be picked by the host nation, which may include some team sports such as basketball. Recognised sports are sports which have been approved by the CGF but which are deemed to need expansion; host nations may not pick these sports for their programme until the CGF's requirements are fulfilled.[6]

Only six teams have attended every Commonwealth Games: Australia, Canada, England, New Zealand, Scotland and Wales. Australia has been the highest scoring team for ten games, England for seven and Canada for one.

Very few Commonwealth dependencies and nations have yet to take part:

Lawn bowler Willie Wood from Scotland is the first competitor to have competed in seven Commonwealth Games, from 1974 to 2002. Also, Greg Yelavich, a sports shooter from New Zealand, has won 12 medals in seven games from 1986 to 2010.