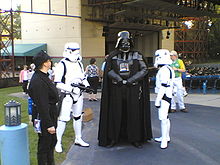 George Lucas' six-film Star Wars saga has had a significant impact on modern American popular culture. Star Wars references are deeply embedded in popular culture;[1] references to the main characters and themes of Star Wars are casually made in many English-speaking countries with the assumption that others will understand the reference. Darth Vader has become an iconic villain. Phrases like "evil empire" and "May the Force be with you" have become part of the popular lexicon.[2] The first Star Wars movie in 1977 was a cultural unifier,[3] enjoyed by a wide spectrum of people.[4]

Science fiction since the original 1977 Star Wars, particularly in film, has often been influenced by and compared to Star Wars. Sounds, visuals, and even the music from the films have become part of the tapestry of American society. The film also helped launch the science fiction boom of the late 1970s and early 1980s, and made science fiction movies a blockbuster genre.[5] It has also been parodied in movies and short videos, such as Spaceballs.

Star Wars fundamentally changed the aesthetics and narratives of Hollywood movies,[6], switching the focus of Hollywood-made Films from deep, meaningful stories based on dramatic conflict, themes and irony to sprawling special-effects-laden blockbusters, as well as changing the Hollywood film industry in fundamental ways. Before Star Wars, special effects in movies had not appreciably advanced since the 1950s.[6] Star Wars was also important in the movement towards the use of computer initiated imagery in movies.[2] The commercial success of Star Wars created a boom in state-of-the-art special effects in the late 1970s. There was increased investment in special effects. Companies like Industrial Light & Magic and Digital Productions were created to provide them. The 1977 Star Wars pioneered the genre pastiche, where several classic movie genres are combined in one movie. In Star Wars the genres were science fiction, the Western, the war film, and the quasi-mystical epic.[5] Along with Jaws, Star Wars started the tradition of the summer blockbuster movie in the entertainment industry, where movies open on many screens at the same time and profitable franchises are important.[2][4] It created the model for the major movie trilogy and showed that merchandising rights on a movie could generate more money than the movie itself did.[3]

20th Century Fox optioned Star Wars. When it unexpectedly became the decade's blockbuster, grossing $100 million in three months, Fox's stock soared from $6 to $25 per share and generated revenues of $1.2 million a day for the studio. Fox purchased the Aspen skiing and Pebble Beach golf corporations with the increased cash flow and still declared excess profits in 1977. Income from Star Wars re-releases, sequels, and merchandising enriched the studio in the following decades. Star Wars helped Fox to change from an almost bankrupt production company to a thriving media conglomerate.[5]

The Smithsonian's National Air and Space Museum had an exhibition called "Star Wars: The Magic of Myth". It was an exhibition of original production models, props, costumes, and characters from the first three Star Wars films.[7] In October 2007, NASA launched a space shuttle carrying an original lightsaber into orbit. The prop handle had been used as Luke Skywalker's in The Return of the Jedi. After spending two weeks in orbit, it was brought back to Earth on November 7, 2007, to be returned to its owner George Lucas.[8]

John Williams' score for the films, especially the "Main Title" theme and the recurring "The Imperial March (Darth Vader's Theme)", has become part of the musical repertoire. Other symphonic themes are often used as fanfares at sporting events.[citation needed]

"When politicians, newspapers, and the public generally use the phrase star wars for their convenience, in parody or descriptively to further a communication of their views on SDI, plaintiff has no rights as owner of the mark to prevent this use of STAR WARS. ... Since Jonathan Swift's time, creators of fictional worlds have seen their vocabulary for fantasy appropriated to describe reality. Trademark laws regulate unfair competition, not the parallel development of new dictionary meanings in the everyday give and take of human discourse."

On 4 May 1995 during a defence debate[9] in the UK parliament, MP Harry Cohen related the Star Wars Day joke: "May the 4th be with you". Star Wars also made its mark in the 2001 census, when over 390,000 UK respondents entered their religion as Jedi.

The holographic video effect associated with Star Wars served as a technological tool for CNN during its 2008 Election Night coverage. CNN reporter Jessica Yellin and musician will.i.am looked as though they were in the network's New York City studios talking face-to-face with hosts Anderson Cooper and Wolf Blitzer, when in reality, they were in Chicago at Barack Obama's rally. The process involved Yellin and will.i.am standing in front of a blue screen in a special tent, while being shot by 35 HD cameras.[10]

Furthermore, whole films have now been dedicated to the legends, such as Family Guy's tribute-spoof season premiere episode called Blue Harvest, in dedication the saga's 30th anniversary. A sequel to the episode as a parody to The Empire Strikes Back titled Something, Something, Something, Dark Side aired in the eighth season and another parody It's a Trap! will air in the ninth season. It has also been revealed that The Cleveland Show will make spoofs of the three prequels. In the film Zack and Miri Make a Porno, Zack (Seth Rogen) and Miri (Elizabeth Banks) decided to make a pornographic film called Star Whores in order to get them out of debt.

Along with fan films, there have also been comics based on the series. This includes the web comic, Arc: Clone Files, which involves the stories of a group of clone troopers on Kamino.

The Mirage Raceway in Shimmering Flats, south of Kalimdor (World of Warcraft) is rumored to be a homage to Star War's Tatooine planet. Some of the Goblin racers have a slight resemblance to Star Wars Pod Racers, also similar is the fact that the course takes place in a desert, similar to the film saga. [11]

The 2009 film Fanboys, produced by The Weinstein Company, takes place in 1998. It is about a group of men who are huge fans of Star Wars. One of them is diagnosed with cancer and has only four months to live. The others are worried that he might not live long enough to see Star Wars: Episode I: The Phantom Menace, so they decide to put a plan that they plotted since the eighth grade into action. They drive from Ohio to California, break into the Skywalker Ranch and steal a rough cut of the film.

In the 2009 Showtime Documentary Guys and Divas: Battle of the High School Musicals, which studies high school theater in Southern Indiana and the students involved, one of the students holds up a Yoda figure and does an impression saying "a great actor Adam is" while moving its lips.

An episode in Danny Phantom, "The Fenton Menace", was named after Star Wars Episode I: The Phantom Menace.

The 2010 documentary The People vs. George Lucas focuses on the franchise and George Lucas.

In 2011, the animated show My Little Pony: Friendship is Magic parodied the famous ending scene of A New Hope.