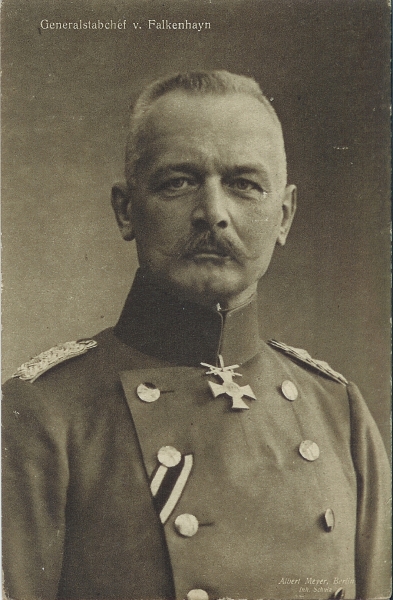 Erich von Falkenhayn ( &ndash; ) was a German and Chief of the General Staff during . He became a military writer after the war.

Born in Burg Belchau near Graudenz in the , Falkenhayn was a career soldier. Between 1896 and 1903, he served in Qing China, and saw action during the . Afterwards, he was stationed in , , and , with ever-increasing rank. In 1913, he became , in which capacity he was one of the key players in the genesis of when the of Archduke Franz Ferdinand in took place. Like most German military, he did not then count on an overall war, but he very soon embraced it and belonged to those pushing Kaiser Wilhelm II to declare war.

Falkenhayn succeeded Moltke as Chief of Staff after the Battle of the Marne on . Confronted with the failure of the , Falkenhayn attempted to outflank the British and French in what has been called the "", a series of engagements throughout northern France and Belgium with the aim to reach the coast. The Germans were eventually stopped by the British and French at the .

Falkenhayn preferred an offensive strategy on the Western Front while conducting a limited campaign in the east in the hope that Russia would accept a separate armistice much more easily if it had not been humiliated too much. This brought him into conflict with Hindenburg and Ludendorff, who favored massive offensives in the east. Eventually, either in the hope that a massive slaughter would lead Europe's political leaders to consider ending the war, or that losses would in the end be less harmful for Germany than for France, Falkenhayn staged a massive at Verdun in early 1916. Although more than a quarter of a million soldiers eventually died &mdash; for which Falkenhayn was sometimes called "the Blood-Miller of Verdun" &mdash; neither side's resolve was lessened, because, contrary to Falkenhayn's assumptions, the Entente was able to replace their dead with fresh "human material" (the term comes from that time). After the failure at Verdun, coupled with several reverses in the east and incessant lobbying by Hindenburg and Ludendorff, Falkenhayn was replaced as Chief of Staff by Hindenburg.

Falkenhayn then assumed command of the Ninth Army in , and in August launched a joint offensive against Romania with Mackensen. Falkenhayn's forces captured the Romanian capital of in less than four months.

Following this success, Falkenhayn went to take military command in then-Turkish , where he eventually failed to prevent the British under General from conquering in December 1917.

In February 1918, Falkenhayn became commander of the Tenth Army in , in which capacity he witnessed the end of the war. In 1919, he retired from the Army and withdrew to his estate, from where he wrote several books on war, strategy, and his autobiography. He died at near .

Falkenhayn was in many ways a representative of the Prussian generals; he was a in the literal sense, he had undeniable political and military competence but he was contemptous toward and parliament. The most recent book on his strategy (Foley 2005) argues that his "blood-mill" approach was copied and successfully used by the Allies, who had larger resources; in that sense, Falkenhayn's method would, indirectly, have led to Germany losing the war.

Militarily, Falkenhayn had a mixed record. His offensive at Verdun was a strategic failure. His defence of Palestine in 1917 was also a failure - though it must be admitted that his forces were both outnumbered and out-classed. On the other hand, his planning and subsequent conquest of Romania was a near perfect example of how to conduct an offensive against superior forces. considered him to be the ablest by far of the German generals in World War I. Dupuy also ranks him near the top of the German commanders, just below and (The Encyclopedia of Military History, p.915).

All sources indicate that Falkenhayn was a loyal, honest, and punctilious friend and superior. His positive legacy is his conduct during the war in Palestine in 1917. As his biographer Afflerbach claims, "An inhuman excess against the Jews in Palestine was only prevented by Falkenhayn's conduct, which against the background of the German history of the 20th century has a special meaning, and one that distinguishes Falkenhayn." (1994, 485)