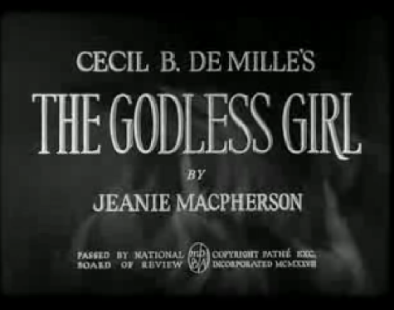 "The Godless Girl" (1929) is a film directed by , shown for years as his last completely . However, the restored the film's dialogue scenes that were added during the transition of films from the silent era to the sound era, thereby restoring a film that was one of DeMille's first part-sound efforts.

This drama features a romance between an girl, and the male head of a youth organization. The two are at odds when they are thrown into a , but fall in love. The film ends with a fire that breaks out in the school; after the girl is rescued there is an in which she apparently has been converted back to Christianity.

The film was very popular in the and in , though it was a disaster in the US. When released in August 1928 in its version, it was not a success. DeMille attributed the film’s failure to its already outmoded position in the transition from silent to sound cinema. Nor did it recover more than two-third of its production costs when released in a so-called "goat gland" version with the addition of a final reel in 1929.

In 2007, a version was released by and , in association with the Cecil B. deMille Foundation and , restored from deMille's own nitrate print, with a new music score by .