Burlingame was born in St. Paul, Minnesota[1] and moved around a lot while growing up as a son of an active duty member of the United States Air Force.[1] He spent parts of his childhood in California and England.[1] Burlingame graduated from Anaheim High School in California.

Charles Burlingame graduated from the U.S. Naval Academy in 1971.[2] In the Navy, he flew F-4 Phantom jets, rising to the rank of captain.[1] In 1979, Burlingame left active duty with the Navy and joined American Airlines though, he remained in the Naval Reserves. He was an honor graduate of the Navy “Top Gun” school NAS Miramar. Burlingame volunteered to be activated during the Gulf War.[1] Burlingame also spent time working in The Pentagon, while in the Naval Reserves.[3] 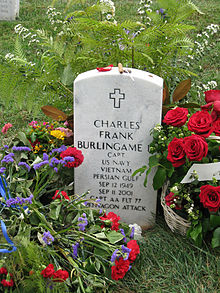 Burlingame was the pilot of American Airlines Flight 77, with First Officer David Charlebois,[6] before it was hijacked and flown into the Pentagon. He would have turned 52 on September 12, 2001.

Burlingame was buried in the Arlington National Cemetery. He was initially deemed ineligible for burial there due to his status as a reservist deceased at an age younger than 60, but Burlingame was given a waiver and his case triggered reform of Arlington's burial criteria.[7]

His daughter, Wendy Burlingame, died in late 2006 in a suspicious apartment fire.[8]

At the National 9/11 Memorial, Burlingame is memorialized at the South Pool, on Panel S-69.[9]