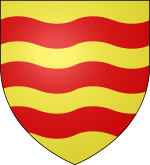 Coat of arms of the Rt. Hon. The Earl of Perth, Chief of Clan Drummond

The title Earl of Perth was created in the Peerage of Scotland in 1605 for James Drummond, 4th Lord Drummond.

The Drummond family claim descent from Maurice, son of George, a younger son of King Andrew I of Hungary. Maurice arrived in Scotland on the ship which brought Edgar Atheling, the Saxon claimant to the crown of England after the Norman Conquest, and his sister Margaret, to Scotland in 1068. Maurice was given lands in Lennox (Dumbartonshire), together with the hereditary stewardship of the county. His successor John Drummond, the 7th Steward, was deprived of the lands and retired into Perthshire.[1]

John Drummond, Justiciar of Scotia was created a Lord of Parliament in 1487/8 by King James III of Scotland. His direct descendant, James, Lord Drummond, Ambassador to Spain, was created Earl of Perth in 1605.

James Drummond, 4th Earl of Perth was "attainted" for supporting the Jacobites during the rising of 1715. He had been created Duke of Perth, Marquess of Drummond, Earl of Stobhall, Viscount Cargill, and Baron Concraig in 1701 by the exiled Jacobite claimant to the British thrones, recognised by adherents of the Royal Stuarts as King James III and VIII. This creation, in the Jacobite Peerage, was never recognised by the de facto British government. He and his successors nonetheless continued to claim the Earldom together with the Dukedom. Upon the death of the sixth Duke in 1760, he was succeeded by a second cousin, descended from the younger brother of the 4th Earl and 1st Jacobite Duke, John Drummond, first Earl and Jacobite Duke of Melfort, by his first wife. He, in turn, was succeeded by his third but only surviving son, as the 8th (Jacobite) Duke and 11th de jure Earl, who obtained in 1783 the restoration of the estates, forfeited as a result of the Jacobite rising of 1745. He did not succeed, however, in removing the attainder of 1716, but was created by George III of the Hanoverian dynasty, in 1797, Lord Perth, Baron Drummond of Stobhall, in the Peerage of Great Britain, which title became extinct on his death in 1800. He was succeeded, as 9th Jacobite Duke of Perth by his cousin, James Lewis Drummond, fourth Duke of Melfort, another holder of a Jacobite Dukedom. The 10th Duke, who also held the Melfort titles, was a prelate of Roman Catholic Church, known as the Abbé de Melfort. Upon his death in 1840, he was succeeded in his peerage titles by his nephew, George Drummond, who had embraced the Protestant faith.

The Earl of Perth is the hereditary Clan Chief of Clan Drummond.

The family seat remains at Stobhall, near Perth, Scotland.

The heir apparent is James David Drummond, Viscount of Strathallan (b. 1965)

John Eric Drummond, 9th Earl of Perth is according to