Magnus was the son of King Olaf Kyrre , grandson of King Harald Hardrada and great-nephew of King Olaf the Saint. The epithet berfœtt means barefoot or bareleg and, according to the Icelandic writer Snorri Sturluson, it came from his habit of wearing Gaelic-style clothing, leaving the lower legs bare. According to the Danish historian Saxo Grammaticus, he got the nickname because he was forced to flee from an attack in his bare feet.[2]

Title page of The Saga of Magnus Barefoot, Heimskringla (1899)

Norway had experienced a period of peace during the reign of Magnus' father Olaf Kyrri. In the autumn of 1093 King Olaf died and Magnus was hailed as king in Viken in the month of September. Initially he had a rival in his cousin, Hakon Magnusson who was the son of Olaf's short-lived brother King Magnus II of Norway. A peaceful settlement was put in place but the relationship between the two was tense. As Håkon was only recognized at Oppland and in Trøndelag, his rule was in practice of limited importance. There was no armed confrontation between the two before Håkon died suddenly in February 1095.[3]

Magnus Barefoot's rule lasted for 10 years, a period when Norway moved in some respects into the European models of church organisation, and for a short time into more centralised royal rule. 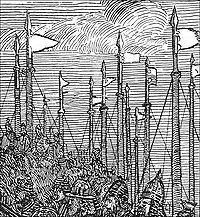 The army of King Magnus Berrføtt of Norway in Scotland, ca 1100

Magnus sought to re-establish Norwegian influence around the Irish Sea. In 1098 Magnus left with a fleet of 60 ships and 5,000 men to Orkney, where the strength of the fleet led to a reinforcement of the Norwegian king's dominion. Magnus Barefoot then led his fleet from Mann to Ynys Môn, Gwynedd, and appeared off of the coast at Ynys Seiriol (Puffin Island), interrupting a Norman victory celebration after they had recently defeated the Welsh of Gwynedd.[4]

In the battle that followed between the Norman occupiers and the Norse, known as the Battle of Anglesey Sound, Magnus shot dead the earl of Shrewsbury with an arrow to the eye.[4] The Norse left as suddenly as they had arrived, leaving the Norman army weakened and demoralized.[4] Magnus conquered the Orkney Islands, the Hebrides and the Isle of Man. Edgar, King of Scotland signed a treaty with Magnus setting the boundary between Scots and Norwegian claims in the west. By ceding claims to the Hebrides and Kintyre to Magnus, Edgar acknowledged the practical realities of the existing situation. Magnus returned to Norway in early 1099.

In 1097 Magnus Barefoot had first moved into Götaland to secure the Norwegian border, and to pacify the areas along the economically important traffic artery. By the big lake Vänern he let build a fortication with a garrison of 300 men. The Swedish king demanded that the Norwegians surrender and they subsequently returned to Norway. In the year 1100, King Magnus began a campaign against Swedish King Inge Stenkilsson of Sweden to support his claim in the countryside west of Lake Vänern. He sacked a larger area of Götaland. But the war did not lead to lasting results. At the peace meeting in 1101 (called the meeting of the three kings) at Kungahälla in Norwegian Båhuslen, now Kungälv, three Scandinavian kings were present; King Inge the Elder of Sweden, King Eric I of Denmark, and King Magnus of Norway. Magnus agreed to marriage with King Inge's daughter Margaret Fredkulla at part of the peace settlement.

According to the sagas, in 1103 Magnus set out again to raid in Ireland. He made an alliance with the powerful Munster king and self-proclaimed High King of Ireland, Muirchertach Ua Briain, whose young daughter married Magnus's young son, Sigurd I Magnusson. Muirchertach had controlled Dublin since 1093, and at this stage in his career seems to have regarded Magnus as an ally with the necessary seapower in his ongoing war with the Mac Lochlainn dynasty of the north-west.

"King Magnus was in winter (A.D. 1102) up in Connaught with King Myrkjartan, but set men to defend the country he had taken. Towards spring both kings went westward with their army all the way to Ulster, where they had many battles, subdued the country, and had conquered the greatest part of Ulster when Myrkjartan returned home to Connaught." The Chronicle of the Kings of Norway, Magnus Barefoot's Saga.

In 1103 they made a joint assault in the north, where Muirchertach's forces were routed. Magnus then decided to return to Norway. He sent a message with a small group of his men to Muirchertach Ua Briain, who had returned to Connaught, requesting provisions for the sea journey ahead of them. According to the sagas, while awaiting these supplies, they went on land through a marshy area and saw a large dust cloud on the horizon. It was discovered that it was indeed the men with the supplies they were awaiting.

It was at this point that a large force of the Ulaid came out from their hiding places in the marsh and copses, putting into action an ambush. The Norse forces were taken by surprise and were not in battle order. Magnus attempted to assert control over his disordered army, ordering a portion of his force to seize the more secure ground and provide archer fire to slow down the Irish. In the ensuing melee, King Magnus received wounds to his legs, being pierced by a spear through both thighs above the knees but he fought on, attempting to get his men back to the level ground of the camp site. An axe wielding Irishman charged the King and struck him in the neck, before he was himself killed by Magnus's personal guard. King Magnus died where he fell on St Bartholomew's day 24th Aug 1103, aged 29 years. He was the last Norwegian king to fall in battle abroad.[5] The Norse who escaped the ambush sailed back to Norway.[6] One of Magnus' men who survived the attack took Magnus' famous sword Legbiter back to Norway.[5]

Magnus' consort was Margaret Fredkulla, daughter of King Inge the Elder of Sweden and Queen Helena, whom he married in 1101 at Kungahälla. The marriage had been arranged as a part of the peace treaty between Sweden and Norway. Margaret was from this point known as Margaret Fredkulla meaning "Margaret the Maiden of Peace". They did not have surviving children. Magnus' illegitimate daughter Ragnhild Magnusdotter married Harald Kesja, an illegitimate son of Eric I of Denmark.

At the time of the death of King Magnus, his known sons were Øystein Magnusson , Sigurd Magnusson and Olaf Magnusson. They all had different mothers. They jointly succeeded Magnus as kings of Norway. Harald Gille and Sigurd Slembedjakn later came forward and both claimed to also be sons of King Magnus and thus heirs to the throne. Harald Gilli became King Harald IV of Norway following the death of his half-brother King Sigurd in 1130.

The thirteenth-century Chronicle of the Kings of Man and the Isles says that he was buried at the church of Saint Patrick in Down. The Icelandic writer Snorri Sturluson recounts his death while an ally of Muirchertach. '[7] These accounts tell that he died "a Ulaztiri",'in the land of the Ulaid, contiguous to modern Ulster, which by the late eleventh century largely comprised the majority of what are now known as Counties Antrim and Down. The political alliances of the time indicate activity in this area.[citation needed]

It is believed[by whom?] that Magnus's final battle was fought in an area known locally as the War Hollow, situated in the town of Portrush, County Antrim. It is known that a battle took place there between an Irish army and invaders around that period and artefacts have been found from the era.[8]

Another suggested site is near Downpatrick.[9] The study of the annals and the folklore of Strangford Lough, in County Down, Northern Ireland tell of Viking dominance over the Lough area from the 9th to the 11th Century.[10] The Downpatrick runestone monument marking the site was erected in March 2003 to mark the 900th anniversary of his death.[11]