Events in the year 2007 in the Republic of India. 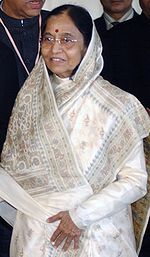 Prathiba Patil is elected as the first female President of India