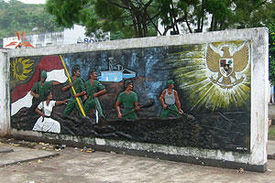 A workers' mural in Jayapura, Indonesia

Jayapura City (Indonesian: Kota Jayapura) is the capital of Papua province, Indonesia, on the island of New Guinea. It is situated on Yos Sudarso Bay (formerly known as Humboldt Bay). Its approximate population in 2002 was 200,000.

From 1910 to 1962, the city was known as Hollandia and was the capital of a district of the same name in the northeast of West New Guinea. It was briefly called Kota Baru and Sukarnopura before assuming its present name in 1968. The literal meaning of Jayapura, as of Jaipur in Rajasthan, is 'City of Victory' (Sanskrit jaya: "victory"; pura: "city").

The northern part of Dutch New Guinea was occupied by Japanese forces in 1942. Allied forces drove out the Japanese after amphibious landings near Hollandia, from April 21, 1944. The area served as General Douglas MacArthur's headquarters until the conquest of the Philippines in March 1945. Over twenty U.S. bases were established and half a million US personnel moved through the area.[1]

In 1945, the Dutch made Hollandia the capital of Netherlands New Guinea. After the territory was handed over to the United Nations, on October 1, 1962, the city became known by the Indonesian name Kota Baru, and retained the name when Indonesia took control, on May 1, 1963. The city was briefly renamed Sukarnopura, after President Sukarno, until the end of 1968, when it acquired its present name.

Jayapura was struck by the Aitape Tsunami after the 1998 Papua New Guinea earthquake.[2]

Jayapura is the home of the Persipura, a professional football club that has produced many famous Indonesian footballers and have won the Indonesia Super League once in the 2008–09 season. Persipura plays its home matches in the Mandala Stadium.