Digital Domain is a visual effects and animation company founded by film director James Cameron, Stan Winston and Scott Ross. It is based in Venice, Los Angeles, California. The company is known for creating state-of-the-art digital imagery for feature films, television advertising, interactive visual media and the video game industry.

The company began producing visual effects in 1993, its first three films being True Lies, Interview with the Vampire: The Vampire Chronicles, and Color of Night in 1994.

It has produced effects for more than 60 films including Titanic, Apollo 13, What Dreams May Come, The Fifth Element, How the Grinch Stole Christmas!, Armageddon, Star Trek: Nemesis and The Day After Tomorrow. More recent films include I, Robot, Flags of Our Fathers, Pirates of the Caribbean: At World's End, Transformers, Speed Racer, The Curious Case of Benjamin Button, Star Trek, Transformers: Revenge of the Fallen, G.I. Joe: The Rise of Cobra, 2012, Percy Jackson & the Olympians: The Lightning Thief, The A-Team, Tron: Legacy, Thor, X-Men: First Class and most recently, Transformers: Dark of the Moon and Real Steel.[1] 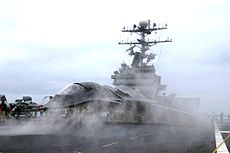 From the film Stealth: the fictional F/A-37 Talon on USS Abraham Lincoln (CVN-72).

In October 2002, Digital Domain launched a subsidiary, D2 Software, to market and distribute its Academy Award-winning compositing software, Nuke.[2] The move was partially motivated by Apple's acquisition of a similar program, Shake.[2]

In 2009, a sister company Tradition Studios was opened in Florida to develop and co-produce original, family-oriented CG animated features that will rival films created by Disney, DreamWorks and Pixar. The studio is currently constructing a 115,000-square-foot (10,700 m2) facility, which is scheduled to open in Port St. Lucie in December 2011,[4] and is expected to create more than 1,000 jobs over the next few years.[5] The company, which has attracted many talents, including Aaron Blaise, the director of Brother Bear, and Brad Lewis, the co-director of Cars 2,[4] is currently developing an animated feature film The Legend of Tembo[6] for a 2014 release[5] with Aaron Blaise and Chuck Williams directing it. Tembo will tell a story of a young African elephant who is captured and separated from his family and taken to India where he has to become a fierce, battle elephant.[7]

The studio has partnered in 2011 with Reliance MediaWorks, a division of the Indian media conglomerate Reliance ADA Group, to open studios in London and Mumbai to provide post-production services for movies, TV shows and commercials. The facilities will be owned by Reliance, which has existing post-production facilities in London and Mumbai, and will be managed by Digital Domain.[8]

Digital Domain's business units have been recognized with awards from many top industry organizations.