National University of Advanced Legal Studies (NUALS) (earlier National Institute of Advanced Legal Studies) is a university located at Kochi, India for under-graduate, graduate and post-graduate legal education. The National University of Advanced Legal Studies (hereinafter ‘NUALS’) was established by Act 27 of 2005 of the Kerala Legislative Assembly to advance and disseminate learning and knowledge of law and legal processes, to develop scholarship and a sense of responsibility towards society and to promote legal and judicial reforms to strengthen the administration of justice in India. The Chief Justice of India is the Visitor, the Chief Justice of the High Court of Kerala is the Chancellor, and the Minister for Education, Kerala state is the Pro-Chancellor of the University. 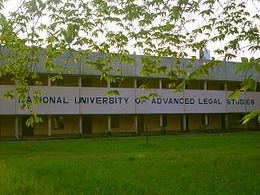 The Government of Kerala allotted 2.5 acres (10,000 m2) of land and a permanent building on lease for housing the University in Kaloor, Cochin. The Government has also allotted 10 acres (40,000 m2) of land on lease for 90 years near KINFRA Hi-Tech Park, at Kalamassery, nearer to Nedumbassery where the civilian airport is situated in Kochi, for constructing the permanent campus for this University. The University will be shifted to the new campus within a short period.

The Government of Kerala constituted this University by merging the erstwhile National Institute for Advanced Legal Studies (NIALS), which was established and managed by the Bar Council of Kerala and Bar Council of Kerala Trust. NIALS was then the approved centre of the Cochin University of Science & Technology and affiliated to that University. By the merging of NIALS to the University all the students of NIALS became the students of this University and all the assets and liabilities were transferred and the 5year B.A. LLB (Hons.) course run by the erstwhile NIALS became the course of this University. The Government of Kerala has allotted 2.5 acres (10,000 m2) of land and a permanent building on lease for housing the University. The permanent campus of NUALS is under construction on 10 acres (40,000 m2) of land leased to it by the Government for 90 years at Kalamassery. It is expected that the permanent campus would be operational from the semester beginning in June 2011. At present the Kalamassery Campus of NUALS consists of: (Details from advertisement by NUALS in May 2011 for services to be provided for at its campus and after on-site verification)

The standard and quality of any educational institution mainly depends upon the facilities and services provided in the Library. It is considered as the heart and soul of an institution imparting quality education. The Law School Library has been an integral part of its academic endeavor. The curriculum and teaching methods at NUALS require both intensive and extensive use of the materials in the library. Acquisition of latest books and journals helps the NUALS library to keep pace with changing times.

IT Infrastructure: NUALS is WiFi enabled and has a computer wing that offers unlimited Internet access to students. Facilities available in computer wing for the students include online search of legal databases and printing. The subject of Information Technology for Lawyers taught for BA, LL.B. (Hons.) programme enables the students to be proficient in the use of computer as well as Internet surfing and essential computer usage.

A canteen functions in the campus during college days. Photo-copy facilities are provided to students.

Moot Court Society, Legal Aid Clinic, Law and Economic Forum, Debate and Seminar Forum, and Law and Society Forum are functioning under the guidance of Teachers. O.H.P and Slide projectors are available for use in the classrooms.

The Bar Council of India has recommended 38 subjects (including 4 training courses) for the 5 year LLB course. NUALS has developed an innovative style of imparting legal education, in keeping with the changing times and attitudes towards the study of law. The University implements the Socrates method of teaching, where the students and teachers engage in an interactive mode of conducting the classes. Students are encouraged to raise questions and voice opinions, and the teacher facilitates a healthy discussion by chipping in with his/her expertise. The academic structure is intended to provide a wholesome learning experience for the students. The students are either allotted project topics or are allowed to choose a topic of their interest. In either case, the research work and subsequent collating of information is done by the students themselves. The project work is evaluated by conducting internal examinations, seminars, paper presentations etc., which ensure that the student not only appraises his area of research thoroughly, but also articulates the same before a set audience. Besides, the students are also required to conduct Legal Aid camps and Legal Aid clinics in selected villages in Kerala. This provides practical, grass-root insights.

Society, Science and Law, Medical Jurisprudence, Law and Medicine, Law and Forensic Science are some of the specialised subjects offered and taught by the experts in the field, so as to make the graduates of this University professionally competent. The students are also given full exposure to some of the socially relevant subjects like, Cyber law and E-Governance, Energy Law, Media and the Law, Environment and Law etc. Thus study in this University is made intellectually challenging and professionally rewarding.

Examination system followed at NUALS has been revamped; unitisation has been adopted, and the syllabus has been restructured in such a way that all the subjects have been divided into five units, such that a student has to study all the five units in detail, with a view to be thorough in the subject.

The teaching methods at NUALS are varied. The discussion method, a combination of the case law method and Socratic method are employed in teaching the subjects. Extensive discussions are an integral part of each lecture. Seminars, Moot Courts, Workshops, Field visits etc. are used as a tool to activate the students and to give them intellectual exercise with an idea of developing in them an urge for learning the law in the context of practice.

The syllabus of NUALS was drafted under the able leadership of former Director of NUALS (then NIALS), Prof Dr. K.N.Chandrasekharan Pillai, who the former Director of the Indian Law Institute, New Delhi. The syllabus introduces subjects relevant to the study of law, but never incorporated hitherto in the syllabi of Indian law schools. The work group drafted the syllabus bearing in mind the shifting trends in the legal fraternity in India and abroad

The faculty members of NUALS constitute a highly qualified and professional team with a missionary zeal, who have what it takes to equip the students with a deep-rooted understanding of the law. Faculty members have, time and again, published books on subjects of their specialization, which include Indian history, legal language etc. Besides, they also have a number of paper publications to their credit in leading law journals in the country. The fact that a majority of the faculty belong to the Bar, and are reputed advocates in the High Court and lower courts, adds to their practical knowledge, which is of great help during classroom discussions. Guest lecturers and visiting faculty are part of the extended family of NUALS. The University constantly solicits the wisdom of experts and specialists who have carved a niché for themselves in their respective fields. They include, inter alia, Supreme Court lawyers, scientists, medical professionals, Heads of Departments of other Universities, Professors from foreign Universities etc.

The members of the Faculty are:

Eminent Visitors to the University are

NUALS runs an LL.M. Programme from 2009 July onwards in (1) International Trade Law and 2)Constitutional and Administrative Law. From academic year 2011-12, the admission is through the Common Law Admission Test (CLAT) conducted by the consortium of National Law Universities.

NUALS runs a Ph.D. Programme from 2007 onwards the structure of which is in accordance with the Guidelines set by the University Grants Commission.

NUALS is proud to state that Campus Recruitments started from its very first batch of students.[12] A Standing Committee consisting of students is constituted for contacting the law firms and other industries to find appropriate placements for the students.

NUALS has successfully placed most its corporate law aspiring students from its first five batches of B.A. LL.B. (Hons) programme. The recruiters include Inter alia