Delta Phi Epsilon (ΔΦΕ) is the only national professional foreign service fraternity and sorority. Founded at Georgetown University on January 25, 1920, the society's mission is to promote good fellowship and brotherhood among persons studying or engaged in foreign service. The Alpha chapter went on to colonize at many other universities throughout the country in the first half of the twentieth century. The society has notable members in a variety of fields.

The current president of Delta Phi Epsilon's national board is James-Michael von Stroebel and the current acting president of Alpha Chapter is William Wallace Smith. The current acting president of the Sorority's Alpha Chapter is Geneve Bergeron. The Alpha, Beta, Eta, and Pi chapters do not admit women, but in 1973 the Alpha Chapter of Delta Phi Epsilon Sorority was founded at Georgetown University. Since its creation, the sorority has grown to include chapters at several additional universities, such as Eta chapter in 2006 and Pi in 2009, and has inducted notable national sisters including former U.S. Secretary of State Madeleine Albright.

The fraternity was founded in the wake of World War I, in a time of increased U.S. interest in world politics and solving global issues with diplomacy. In 1919, Edmund A. Walsh at Georgetown University founded the School of Foreign Service (SFS) and in 1924, the Rogers Act formed the basis of the United States Foreign Service. During this time, other groups with similar missions, such as the Council on Foreign Relations, were also founded as were international bodies such as the League of Nations.

The four founders of the fraternity are Alfred O. Arsenau, Wesley O. Ash, Samuel C. Bartlett, and T.J. Patrick O'Connell. The first three, undergraduates in Georgetown's SFS, at first held in common only their experience in overseas military service and their interest in foreign service careers. Later they were drawn together by their common vision for a professional foreign service fraternity for future graduates of the School of Foreign Service and others in the field. The fourth founder had developed a similar vision independently, which he discussed with Arsenau. Later these men joined with seven interested undergraduates (future brothers Sandager, Butts, Ash, MacKenzie, Brooks, Sullivan Scott, and Bates) and signed the Articles of Agreement. After choosing a name and nominating officers, Delta Phi Epsilon Foreign Service Fraternity was founded at the Catholic Community House on E Street on January 25, 1920.

Early expansion focused on East Coast schools, but after World War II, the fraternity saw greater expansion into new institutions across the United States. There was also pressure for the fraternity to admit women. In 1956 the National Board of Directors reached a compromise and created the Delta Phi Epsilon International Society of Business and Foreign Affairs, which was to be open to all. The society however failed to develop or resolve the issue.[1] In the 1960s the fraternity began to see a decline in members.[2] In 1972 the National Board resolved to allow female members to boost flagging numbers, though this amendment failed as it was not carried forward by following Conventions.[1] In 1973, Alpha Chapter aided in the formation of a companion Sorority, a pattern that was followed by Eta Chapter in 2006 and Pi Chapter in 2009.[3]

Further decline in the 1970s caused the folding of twenty-one chapters, including the new sorority, leaving only the original Alpha Chapter fraternity active. This decline is attributed to two major factors: a national decline in professional fraternities and a negative perception of the foreign service. During the Vietnam War, the foreign service was closely associated with contemporary U.S. foreign policy, which was protested against at many member institutions.[2] In the 1980s, Alpha Chapter, which was briefly inactive in 1982, was sustained in part due to the leadership of new National Secretary Terrence J. Boyle. After numerous attempts during the 1990s, some of these defunct chapters were revived in the 2000s. The Alpha Chapter sorority was also revived from 1990 to 1995, and again in 1998.[4] 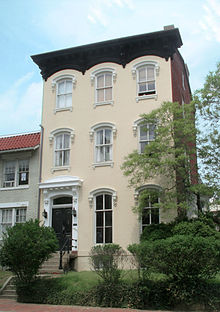 Built in 1870 by merchant William E. Seymour, 3401 Prospect Street has been home to Alpha Chapter since 1940. It is a contributing property to the Georgetown Historic District, a National Historic Landmark listed on the National Register of Historic Places in 1967.