In photography, a color filter array (CFA), or color filter mosaic (CFM), is a mosaic of tiny color filters placed over the pixel sensors of an image sensor to capture color information.

Color filters are needed because the typical photosensors detect light intensity with little or no wavelength specificity, and therefore cannot separate color information.[1] Since sensors are made of semiconductors they obey solid-state physics.

The color filters filter the light by wavelength range, such that the separate filtered intensities include information about the color of light. For example, the Bayer filter (shown to the right) gives information about the intensity of light in red, green, and blue (RGB) wavelength regions. The raw image data captured by the image sensor is then converted to a full-color image (with intensities of all three primary colors represented at each pixel) by a demosaicing algorithm which is tailored for each type of color filter. The spectral transmittance of the CFA elements along with the demosaicing algorithm jointly determine the color rendition.[2] The sensor's passband quantum efficiency and span of the CFA's spectral responses are typically wider than the visible spectrum, thus all visible colors can be distinguished. The responses of the filters do not generally correspond to the CIE color matching functions,[3] so a color translation is required to convert the tristimulus values into a common, absolute color space.[4]

The Foveon X3 sensor uses a different structure such that a pixel utilizes properties of multi-junctions to stack blue, green, and red sensors on top of each other. This arrangement does not require a demosaicing algorithm because each pixel has information about each color. Dick Merrill of Foveon distinguishes the approaches as "vertical color filter" for the Foveon X3 versus "lateral color filter" for the CFA.[5][6] 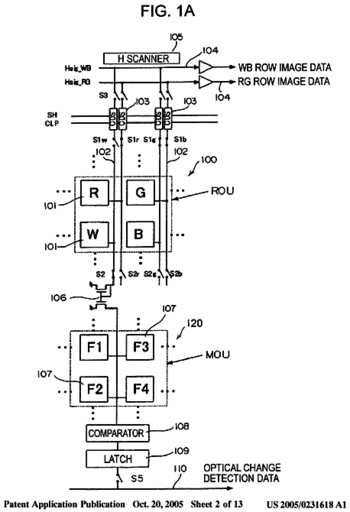 A 2005 patent application depicting an arrangement of red, green, blue, and "white" sensor filters referred to there as "RGBW color filters having the Bayer pattern".
Main article: Bayer filter

The Bayer CFA is named for its inventor, Dr. Bryce E. Bayer from Eastman Kodak. It is realized by application of color filters over the photodiodes used in sensors, cameras, videocameras, and scanners, for creation of the color image.

An RGBW matrix (from Red, Green, Blue, White) is a CFA that includes "white" or transparent filter elements that allow the photodiode to respond to all colors of light; that is, some cells are "panchromatic", and more of the light is detected, rather than absorbed, compared to the Bayer matrix. Kodak announced several RGBW CFA patterns in 2007, all of which have the property that when the panchromatic cells are ignored, the remaining color filtered cells are arranged such that their data can be processed with a standard Bayer demosaicing algorithm.

A CYGM matrix (Cyan, Yellow, Green, Magenta) is a CFA that uses mostly secondary colors, again to allow more of the incident light to be detected rather than absorbed. Other variants include CMY and CMYW matrices.

Manufacture of the CFA

Diazonaphthoquinone (DNQ)-novolac photoresist is one material used as the carrier for making color filters from color dyes. There is some interference between the dyes and the ultraviolet light needed to properly expose the polymer, though solutions have been found for this problem.[7] Color photoresists sometimes used include those with chemical monikers CMCR101R, CMCR101G, CMCR101B, CMCR106R, CMCR106G, and CMCR106B.[8]

For instance, Nakamura said that materials for on-chip color filter arrays fall into two categories: pigment and dye. Pigment based CFAs have become the dominant option because they offer higher heat resistance and light resistance compared to dye based CFAs. In either case, thicknesses ranging up to 1 micrometre are readily available.[1]

Theuwissen says "Previously, the color filter was fabricated on a separate glass plate and glued to the CCD (Ishikawa 1981), but nowadays, all single-chip color cameras are provided with an imager which has a color filter on-chip processed (Dillon, 1978) and not as a hybrid."[9] He provides a bibliography focusing on the number, types, aliasing effects, moire patterns, and spatial frequencies of the absorptive filters.

Some sources indicate that the CFA can be manufactured separately and affixed after the sensor has been manufactured,[10][11][12] while other sensors have the CFA manufactured directly on the surface of the imager.[12][13][14] Theuwissen makes no mention of the materials utilized in CFA manufacture.

At least one early example of an on-chip design utilized gelatin filters (Aoki et al., 1982).[15] The gelatin is sectionalized, via photoliothography, and subsequently dyed. Aoki reveals that a CYWG arrangement was used, with the G filter being an overlap of the Y and C filters.

Filter materials are manufacturer specific.[16] Adams et al. state "Several factors influence the CFA's design. First, the individual CFA filters are usually layers of transmissive (absorptive) organic or pigment dyes. Ensuring that the dyes have the right mechanical properties—such as ease of application, durability, and resistance to humidity and other atmospheric stresses—is a challenging task. This makes it difficult, at best, to fine-tune the spectral responsivities.".

Given that the CFAs are deposited on the image sensor surface at the BEOL (back end of line, the later stages of the integrated circuit manufacturing line), where a low-temperature regime must be rigidly observed (due to the low melting temperature of the aluminum metalized "wires" and the substrate mobility of the dopants implanted within the bulk silicon), organics would be preferred over glass. On the other hand, some CVD silicon oxide processes are low temperature processes.[17]

Some pigment and dye molecules used in CFAs

Nakamura[1] provides a schematic and bibliographic items illustrating the importance of microlenses, their f-number, and the interplay with the CFA and CCD array.[20] Further, a short discussion of anti-reflection films is offered,[21] though Janesick's[22] work appears is more concerned with photon–silicon interaction. Early work on microlenses[23] and on the three-CCD/prism cameras[24] stress the importance of a fully integrated design solution for CFAs. The camera system, as a whole, benefits from careful consideration of CFA technologies and their interplay with other sensor properties.