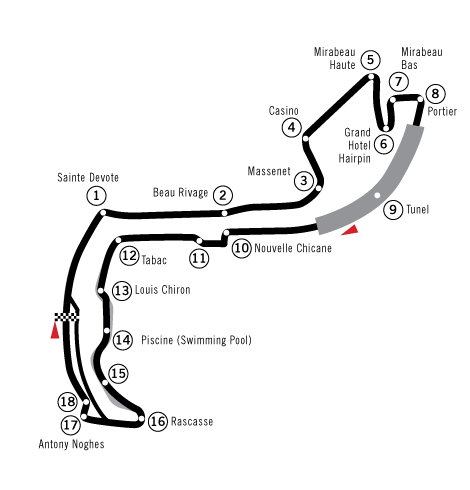 The 2006 Monaco Grand Prix was the seventh race of the 2006 Formula One World Championship. It took place on the weekend of th–28th at the . Prior to the race, Renault's had finished on the podium in all of the last six Grand Prix; winning three of those races. His main championship rival, was looking to win the race, as it would equal 's record at Monaco for most wins, that record standing at six wins.

The race was remembered by many people for Michael Schumacher's actions during the closing stages of the qualifying session for the race, where he stopped his car in the "Rascasse" corner, thus preventing his rival Fernando Alonso improving his time and most likely taking pole off Schumacher, whether the move was deliberate or accidental is still a matter of debate. In the end, Schumacher's actions were deemed "deliberate" and was demoted to the back of the grid as punishment for his actions; promoting Alonso from second to pole position and from third to second.

Fernando Alonso went on to win the race; his first in Monaco, came second and took full advantage of engine failure to finish in third, scoring 's first ever podium finish.

Fernando Alonso showed he had intention of winning his first Monaco Grand Prix as he was fastest in the opening practice session, recording a best lap of 1:16.712, a tenth of a second faster than Honda test driver , who recorded a personal best of 1:16.872. Underlining Renault's challenge was third-fastest Giancarlo Fisichella, who was right behind Mondini, with a best time of 1:16.88.

Alexander Wurz was fastest in the second practice session, one tenth faster than Mondini and two tenths faster than third fastest, Juan Pablo Montoya. Wurz was very pleased with his perforamance in practice, "I went through my tyre choice and I have to say the way the circuit is progressing, it is coming to us just as it did at the Nurburgring, which is good. This makes me quite confident and positive that we will have a good weekend" he said. [ [http://www.formula1.com/race/news/4417/757.html "Thursday practice - selected driver quotes"] Formula1.com. Retrieved ] Anthony Davidson had dislodged a marker stick in the "Swimming Pool" to cause the red flag at the start of the session. After the restart, Davidson got his entry to the "Ste Devote" corner wrong and ed into the tyre wall, removing the Honda’s front wing and left front wheel. [ [http://www.formula1.com/race/news/4416/757.html "Wurz quickest after Davidson crash"] Formula1.com. Retrieved ]

Alonso was quickest in the Saturday morning session, Michael Schumacher, who had challenge Alonso all through the session, was second, 2 tenths slower than Alonso. With Fisichella in third; Coulthard fourth; fifth and Montoya sixth.

Conditions were warm and sunny for the qualifying session for the race the following day, perhaps the biggest challenge for the drivers was getting a "clear track", meaning the drivers wanted a qualifying run without any cars in their way as this can seriously compromise a driver's time with the lack of width around the track so there was a possibility of a "big-name" going out before the top ten shootout. was the first driver to set a time in the session. By the time everyone, except Michael Schumacher, had set a time, lost control of his Ferrari at "Casino Square"; so the ian would start from the back of the grid and the session was red flagged. The session restarted at 1:10pm local time and Schumacher did set a time and was safely through to the second phase. had a decent chance of qualifying for the second session but an error at the chicane mean he was eliminated from qualifying. made a last ditch effort to get out of the elimination zone and did as he moved up to eighth. In the end: was fastest in the first session and , , , and Felipe Massa were eliminated.

was the first to set a time in the session before being beaten by the Renault of Fernando Alonso and McLaren's Kimi Räikkönen who would later battle for the fastest time for the remainder of the session. So the 2005 pole position man, , was fastest with Fernando Alonso closley behind. was the surprise addition to the final session in his Red Bull. , , , , and were eliminated.

The final qualifying session was overshadowed by Michael Schumacher's actions in the dying moments of the session as his rival, Fernando Alonso, was on a flying lap and was, at sector two, over two tenths of a second faster than the German. However, Schumacher stopped his car in the "Rascasse" corner after entering the corner too close to the inside barrier and had to take a late and compromised Alonso's lap. When asked about the incident, Schumacher responded by saying that he "locked up the front and went wide." [ [http://www.formula1.com/race/news/4428/757.html "Post-qualifying press conference - Monaco"] Formula1.com. Retrieved ] The consensus in the paddock was that it was a deliberate act and the issue was raised with the race stewards. The stewards agreed and punished Schumacher by sending him to the back of the grid, alongside his teammate, making this the first time ever in the history of the sport that two Ferrari team cars would start a race on the back row. Ferrari's Managerial Director, , said that he was "disgusted" by the decision.

Schumacher wasn't the only driver to be punished in qualifying, was also punished by the stewards for blocking from improving his time and the Italian lost his three fastest lap times and dropped five places on the grid.

With Schumacher starting from the back of the grid and between himself and his closest rival, , was in a good position. Like the qualifying session the day before, the sun was out and was most certainly staying out for the entire race. Coming into first corner, Alonso lead the Williams of Webber and the two McLarens of Räikkönen and Montoya, nearly all 22 cars escaped the first corner unscathed, only had picked up a problem, losing his front wing after a minor collision by his teammate, . By the end of lap one, Michael Schumacher had already passed after starting the race from the pit lane and Alonso led the race by 8 tenths of a second from Mark Webber. The Australian ran wide at "St Devote" and was overtaken by Räikkönen at "Casino Square" during lap two and was now catching Alonso by setting the fastest lap and by lap four Räikkönen had Alonso in his sight.

In the mid-field, Schumacher was up in 16th place and was right behind the Honda of , but he would not get past Button until the 21st lap where overtook the Briton in the Chicane. By lap 14, the leaders had already caught up with the backmarkers of the two s and Monteiro's Midland. Albers was given a stop-and-go penalty on lap 18 for causing an avoidable collision with his teammate and took his penalty a lap later. By lap 21, the first round of pit stops had begun, Tiago Monteiro, who had already been into the pits, was the first driver to make a scheduled stop. Räikkönen was the first of the top three drivers to pit, which was on lap 22. Alonso pitted from the lead two laps later, leaving Mark Webber in the race lead. After a fast in-lap, Webber pitted from the lead and had the potential to come out ahead of Räikkönen. But he didn't manage to come out in front of the Finnish driver and retained his position. By lap 34, Schumacher was up in 13th position, behind , but two laps later Schumacher came in for his first stop of the race and with a stop of 9.1 seconds, was fueled until the end of the race.

By lap 46, , who had been off pace for the entire race, pitted in for his first and only stop of the race. Webber was having a good race for Williams that afternoon, but it was to be cut short due to an exhaust failure; as the Australian completed his 46th lap, smoke started to appear at the back of his car and blew up in flames at the exit of the pit lane. The was deployed so marshals could get Webber's Williams off track so the rest of the field could resume racing without running into the immobile Williams. The entire field took advantage of the safety car period and pitted a lap later for new tires and fuel. About two laps under the safety car, Räikkönen had bad luck as well as a heat shield, which caught fire before in the first practice session, caught fire again, burning through the car's wiring and, judging by the on-board footage, cutting off the electricity to the engine; Räikkönen parked his McLaren at the exit of the Portier turn.

With the safety car coming back into the pits, Alonso restarted in first place with Juan Pablo Montoya right behind him and was third; Coulthard and Schumacher were in the points as well. By lap 57, Alonso had a commanding lead, as he had made a gap of over 15 seconds to Montoya. retired a lap later promoting his teammate, David Coulthard to fifth and Michael Schumacher up to sixth. got a drive through penalty on lap 59 because he overtook under safety car conditions. Schumacher was closing fast on sixth place Coulthard at about 5 five seconds a lap, lapping in the 1:15s, but the Scot was over 35 seconds ahead of him. Barrichello, who was having a good Grand Prix up to lap 63, where he was given a drive through penalty for speeding in the pit lane, thus promoting up to third place and Coulthard to fourth. Barrichello came back in fifth place.

With a podium almost certain for Trulli, his Toyota team were pleased with the new car's performance but, on lap 72, the Italian had a hydraulic failure that shut the car down on the way up to the Casino, promoting Coulthard to third and was now on course to take Red Bull's first podium and ironically moving Trulli's teammate, , who had a very quiet Grand Prix, up into the points. By lap 75 and only a few laps to go, Michael Schumacher had closed right up on his old Ferrari teammate, Rubens Barrichello but despite a number of attempts, Schumacher failed to get passed the Honda and finished fifth. was sixth in the sister Renault; was seventh and Ralf Schumacher took the final point up for grabs in eighth.

Schumacher's actions in the qualifying session would serve as ammunition for Schumacher's critics to go along with his actions in the and the , although to this day Schumacher himself denies any of the allegations that he "parked" his Ferrari on purpose to block Fernando Alonso from taking pole position off him. The Grand Prix was also the last time that stepped onto a Formula One podium as well as 's first podium finish. This would also be the last Monaco Grand Prix for Montoya, Michael Schumacher and .