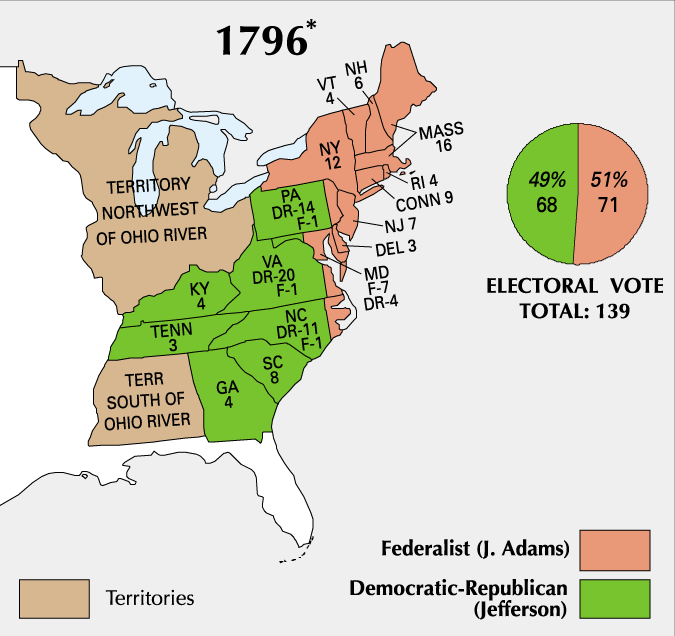 map_size = 350px
map_caption = Presidential election results map. Presidential electoral votes by state.
Because electors couldn't distinguish between their presidential and vice presidential choices until the passage of the Twelfth Amendment, the map above assumes that the presidential votes are exactly the votes for Adams or Jefferson. This leads to an anomaly: Maryland is listed as having cast 7 Federalist votes and 4 Democratic-Republican votes when Maryland had only 10 electors. The problem is that at least one Maryland elector cast his ballot for a Jefferson-Adams ticket. Green denotes states won by Jefferson, burnt orange denotes states won by Adams. Numbers indicate the number of electoral votes allotted to each state.
title = President
before_election =
before_party =
after_election =
after_party = Federalist Party (United States)

With incumbent President having refused a third term in office, incumbent Vice President of was a candidate for the presidency on the Federalist Party ticket with former Governor of as the next most popular Federalist. Their opponents were former Secretary of State of along with Senator of on the Democratic-Republican ticket. At this point, each man from any party ran alone, as the formal position of "" had not yet been established.

Although Adams won, received more votes than Pinckney and was elected Vice-President.

* All electoral votes were cast on the same day, and communications between states were extremely slow at that time, making it very difficult to coordinate which electors were to tank their Vice Presidential votes.
* There were rumors that southern electors pledged to Jefferson were coerced by to give their second vote to Pinckney in hope of electing him President instead of Adams. Indeed, as it turned out, all eight electors in Pinckney's home state of as well as at least one elector in cast ballots for both Jefferson and Pinckney.

The result was that too many Adams electors failed to cast their second vote for Pinckney, and so Adams was elected President while his opponent, Jefferson, was elected Vice President. This was due in part to the support the Democratic-Republican Party had for the French Revolution [http://www.multied.com/elections/1796.html] , but Democratic-Republican support was still significant enough to elect Jefferson Vice-President.

(a) "Wikipedia's research has not yet been sufficient to determine the pairings of 15 electoral votes in Maryland, Pennsylvania, and Virginia; therefore, the possible tickets are listed with the minimum and maximum possible number of electoral votes each."

There were quite a few split tickets, with an elector casting one vote for the head of the Democratic-Republicans, Jefferson, and the other for a Federalist:
* All eight South Carolina electors (along with at least one Pennsylvania elector) voted for native son Thomas Pinckney.
* Three North Carolina electors voted for native son James Iredell.
* There was even at least one elector in Maryland voting for an Adams-Jefferson ticket.

For the only time in United States history, the President and Vice President were from different parties. Jefferson would leverage his position as Vice President to attack President Adams' policies, and this would help him reach the White House in the following election.

This election would provide the first impetus for the . On January 6, 1797, Representative of South Carolina presented a resolution on the floor of the House of Representatives for an amendment to the Constitution by which the presidential electors would designate which candidate would be President and which would be Vice President. [cite book |author=United States Congress |others=4th Congress, 2nd Session |title=Annals of Congress |url=http://memory.loc.gov/cgi-bin/ampage?collId=llac&fileName=006/llac006.db&recNum=154 |accessdate=2006-06-26 |year=1797 |pages=1824] However, no action was taken on his proposal, setting the stage for the deadlocked election of 1800.