The Messerschmitt Bf 108 Taifun was a German single-engine sports and touring aircraft developed by Bayerische Flugzeugwerke (Bavarian Aircraft Works). The Bf 108 was of all-metal construction. The Bf 109 fighter used many of the same design features.[citation needed]

Originally designated the M 37, the aircraft was designed as a four-seat sports/recreation aircraft for competition in the 4th Challenge de Tourisme Internationale (1934).[2][3] The M 37 prototype flew first in spring 1934 powered by a 250 PS (247 hp, 184 kW) Hirth HM 8U inverted-V engine, which drove a three-blade propeller.

Although it was outperformed by several other aircraft in the competition, the M 37's overall performance marked it as a popular choice for record flights. Particular among these traits was its extremely low fuel consumption rate, good handling, and superb takeoff and landing characteristics. One of the first major changes made to the production variants was to adapt the fuselage for a four-seat configuration.

Soon after the first production aircraft began to roll off the assembly line in Augsburg, several Bf 108s had set endurance records.

The Bf 108 was adopted into Luftwaffe service during World War II, where it was primarily used as a personnel transport and liaison aircraft. The plane involved in the Mechelen Incident was a Bf 108.

Production of the Bf 108 was transferred to occupied France during World War II and production continued after the war as the Nord 1000 Pingouin. 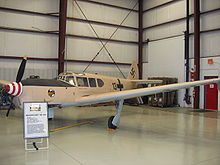 A Nord Noralpha painted to represent an Me 208 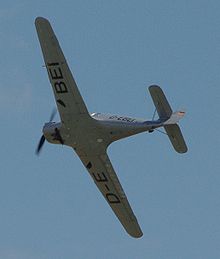